Free beer and wine to boot. The word “bayou” immediately conjures musical references for me. Indeed, music is a vivid touchstone for us all as our brains search through memories. Specific songs serve as markers to recall a time or place because of a tune’s ability to attach emotion to an event or location.

Such is true of Hank Williams insistently bouncy “Jambalaya (On the Bayou).” Williams is one of those legendary artists whose premature passing only enhances his reputation. As I go to YouTube to refresh my memory, the lilting twang of Williams’ voice fills the room, and I’m completely seduced. One of the online comments captures my experience: “I’m a city boy but this music touches something deep within me.” That’s also true of the popular cuisine from New Orleans. It’s a mashup of many influences with a distinct flavor profile using ingredients abundant in the Delta.

Which brings me to David Bilyeu, a former civil engineer with roots in Baton Rouge, whose ever-encroaching love for this cuisine prompted a career change a decade ago when he created a catering company to serve parties from 20-600. But, when this space on Central Avenue opened up, he jumped at the chance to add the market-cafe format.

Since Bayou Market and Cafe grew out of a Bilyeu’s catering company, it’s not a typical restaurant venue. The authentic food is largely served cafeteria-style with disposable plates and utensils. The rotating menu varies daily. Each day of the week offers four different entree and side options plus two soups. One bread of the day is also included with each order. Entrees are available singly or with two sides as a “meal.”

We’re able to sample shrimp & grits and smothered Southern chicken. The shellfish with extra cheesy grits is a textbook dish. Though the shrimp are tiny, they’re not rubbery and certainly everything is bargain-priced, so how can we complain? The chicken is tender and covered with bits of celery, stewed red and green peppers, and corn niblets.

Crayfish étouffée (dark roux-based) is flavorful with NOLA’s holy trinity of onions, bell peppers, and celery plus chunks of the area’s plentiful crayfish. The sweet potato bisque is creamy, but a bit bland, and the mac ‘n’ cheese suffers from the required cafeteria-style service. It’s cheesy, but soft and stuck together, which lessens its impact. Surprisingly, that’s not true of the green beans, which are delightful. They’re bright and offer lovely resistance — somewhere in between French haricots verts and Southern beans cooked with bacon into submission. I’m disappointed that our bread of the day choice means that we don’t get to try the cornbread muffins or Hawaiian rolls, but the basket of crisp garlic bread is a nice accompaniment.

On our visit, only soft drinks are on the menu. They’re not able to sell beer and wine just yet, but it’s available gratis from the cooler near the back if you just ask. Until then, the sweet (or unsweetened) tea will have to serve. 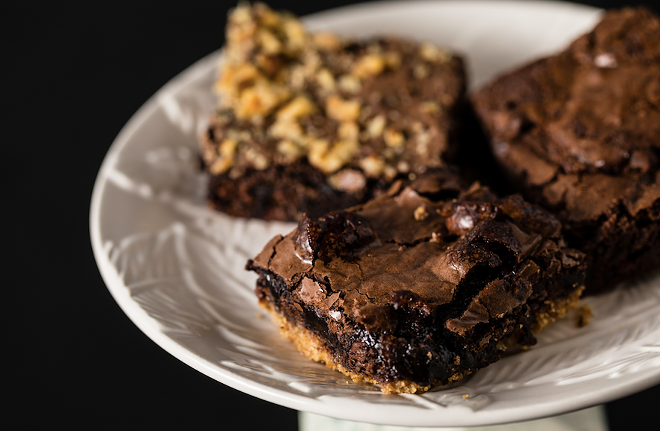 JAMES OSTRAND
We have two delicious fudgy brownies, one s’mores version with marshmallow and another with nuts. Both are a sweet bargain at just a buck.

When it’s time for sweets, we notice that the bourbon bread pudding is only available at Saturday brunch. We do have two delicious fudgy brownies, one s’mores version with marshmallow and another with nuts. Both are a sweet bargain at just a buck.

We also grab shrimp Creole (tomato-based) and seafood jambalaya (rice incorporated) from the “market” cooler in front — tempting you to take out. The crayfish pie is safe because we run out of arms. I’m particularly taken with the shrimp Creole, which offers wonderful layers of flavor and I end up eating the whole container the next day before I’m able to prepare the rice that it deserves. As I lick my final spoonful, Linda Ronstadt’s rising voice echoes in my mind: “I’m going back someday, come what may, to BLUUEE BAAAYYY . . . YOOOUUUUU!”