St. Pete's famous Biff Burger is closed, and everything's for sale at auction next week

The joint has been open since 1956 and it was the last Biff Burger in the U.S. 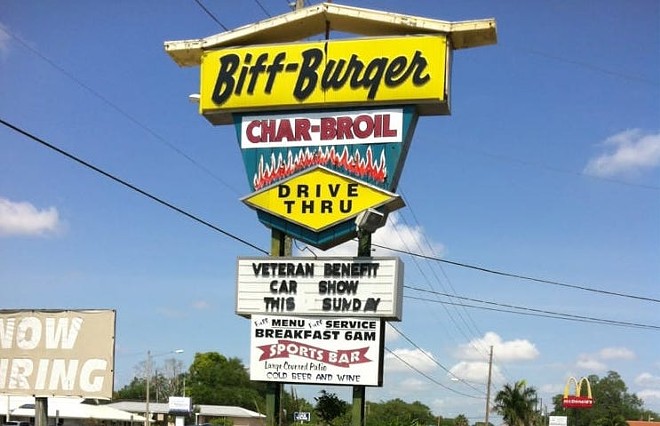 Since the mid-1950’s Tampa Bay’s last remaining Biff Burger has been slinging milkshakes, patty melts and iconic flame-broiled burgers out of its 5,000 square-foot building featuring the concept's original W-shaped roof and checkered exterior.

Unfortunately, those days are history as the last Biff Burger location in Tampa Bay is closing. All remaining assets of St. Petersburg’s Biff Burger at 3939 49th St. N—including its accompanying Buffy’s BBQ—will be auctioned off on Tuesday, Dec. 7 at 10 a.m. Its Facebook page says “we’ll be back," but everything except for the building itself will be up for sale— including signs, decor, and kitchen equipment.

“On behalf of the owner/principal prior to the demolition and property redevelopment, we have been commissioned to sell the entire asset inventory of this local landmark burger bar, ” the auction website states

According to St. Pete Catalyst, Justin Basil of Tampa-based Rockwell Investments purchased the burger spot and adjoining BBQ joint for a little over a million earlier this year, and intended to continue business as usual.

For decades, there were only two remaining Biff Burgers in the country: one in St. Petersburg and a sibling restaurant in Greensboro, North Carolina.

Throughout the '50s and '60s the Clearwater-based burger chain spread like wildfire across the southeastern part of the country, as well as up the East Coast. The expansion was short-lived, as most of the locations closed by the late-'80's due to Miami-based Burger King’s domination of Florida, and then the rest of the country.

Despite having multiple owners since its inception, the exterior of Biff Burger has remained unchanged throughout the decades. The local culture surrounding the roadside burger joint has attracted bikers, classic car fans and hot rods from from all over the Bay area. Biff Burger also started hosting a weekly flea market when its neighbor Wagon Wheel closed in early 2020.

Last summer, the iconic restaurant temporarily closed due to sanitation violations—and customer reviews online continued to state that the quality of food and service of had continued to go downhill. In 2018, there was a foreclosure lawsuit between former owners George and Sandra Musser then-current owner Raphael Prezioso, in which the Musser's stated that Biff Burger was "deteriorating both physically and in patronage and reputation," due to mismanagement by Prezioso and his family. Some longtime customers agreed.

Despite increasing negative reviews over recent years, St. Petersburg will nonetheless mourn the loss of an iconic restaurant that's been serving its surrounding community for over 65 years.  As the auction website states, the building will be demolished sometime after its equipment and decor are auctioned off next week, but the future of its historic location remains unknown.

Support local journalism and a small but mighty team that works tirelessly to bring you news on how coronavirus is affecting Tampa Bay and surrounding areas all while giving you the food and drink news you crave. A one time or monthly donation supports our staff. Every little bit helps. Want to know everything going on with Tampa Bay's food and drink scene? Sign up for our Bites newsletter.
Scroll to read more Openings & Closings articles
Join the Creative Loafing Tampa Bay Press Club