The karaoke-forward restaurant shares a courtyard with the Grand Central Brewhouse. 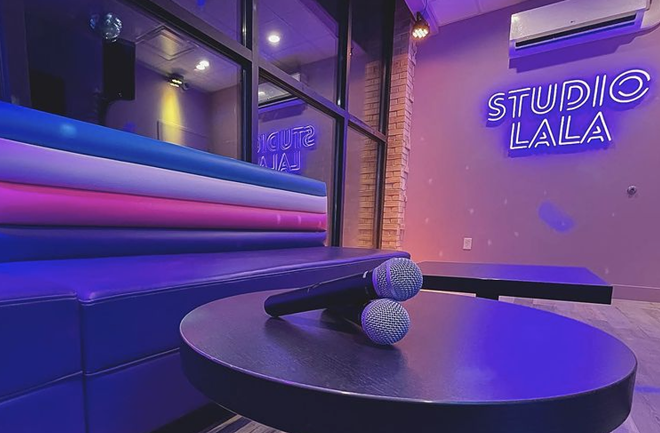 LALA St. Pete / Facebook
If you love singing your heart out at karaoke but don't like embarrassing yourself in front of everyone, then Lala (stylized "LALA"), St. Petersburg’s new (and only) bar and restaurant with private karaoke rooms, may interest you.

This new entertainment-forward eatery at 2324 Central Ave. is slated to open during the first week of February, although there’s no exact grand opening date yet.

The restaurant, its two bars, and seven private karaoke rooms will occupy the two-story building in the Grand Central District. St. Pete’s newest hotspot will share an outdoor courtyard with its neighbor Grand Central Brewhouse, and owner Luckas Herraiz told Creative Loafing in the summer of 2020 that it will serve as an “activity garden.” Games, live music, and maybe even a karaoke contest are to be expected from the shared space when Lala debuts next month.

Lala, a new restaurant, bar and karaoke venue, will open this fall in St. Pete: It’ll share a courtyard with Grand Central Brewhouse.

Herraiz hopped back on the phone to kick off the new year and talk about LALA’s highly-anticipated opening, preview its menu, and give an inside look at its various karaoke rooms.

LALA’s eclectic menu stacked with American-French fusion will definitely distract you from those flat notes and awkward duets.

“Our menu will be inspired by a combination of modern American, French and Mediterranean cuisine," Herraiz tells CL. “There will be charcuterie boards, truffle scallop tartare, filet mignon and beef carpaccio—I think everyone will be able to find a dish that they like.”

Lala will also provide food service to its neighbor Grand Central Brewhouse. Patrons of GCB (whether they’re sitting inside or in the shared courtyard) can place orders for burgers, pizza, wings and other bar-style food, and a Lala waiter will deliver it to them. Lala will also have a late-night menu that parallels the munchie-type eats of GCB.

In addition to food, there will be two full-service bars on the ground and rooftop floors serving a wide variety of wines, speciality cocktails, and local beers. Herraiz says that many drinks from Lala's cocktail program are tropical-inspired and made with natural fruit juices. Anyone in a private karaoke box will have access to the entire food and drink menu, with special waitresses servicing the different rooms—one of the ways Herraiz describes Lala's private karaoke as a “dedicated experience.”

1 article
There will be a total of seven different private rooms available for rent by the hour—the smallest room that holds five people runs for $50 an hour while the largest 12-person room costs $120 an hour. A two-hour minimum is required to book any of the rooms.

Each room is decorated differently, with themes ranging from Old Hollywood glamor to tropical paradise, retro recording studio, disco party and grunge-rock (complete with Nirvana posters.) Hand sanitizer and disposable microphone covers will be among different COVID-19 precautions in place. When LALA opens soon, you can reserve karaoke rooms and book tables for dinner in advance (which is highly recommended) directly through its website.

Private karaoke rooms, or “karaoke boxes” as they’re originally called, became popular in Japan back in the 1980’s, and quickly became a phenomenon for belters and serenaders worldwide. Although LALA will be St. Petersburg’s only private karaoke spot, Tampa Karaoke VIP has been holding the private sing-a-long game down for quite some time.

Herraiz owned and operated the Greek restaurant Tikanis in St. Pete until he sold it two years ago, after realizing he wanted to open a more entertainment-focused restaurant.

“I wanted to create a full entertainment restaurant experience,” Herraiz says. “The sophisticated karaoke trend is pretty popular in Europe, and I wanted to bring that to St. Petersburg.”

Start creating your master karaoke list now, remind yourself that no one wants to sit through a six-minute-long song, and follow @lalastpete on Instagram to get the latest updates on its grand opening happening  sometime next week.

Lala St. Pete will be open seven days a week from 11 a.m.-1 a.m. Sunday-Thursday and 11 a.m.-3 a.m. Friday and Saturday—with its kitchen open the entire time. This new upscale karaoke restaurant will be kid friendly until 9 p.m., but go adult-only until closing.