The only other Sunda restaurants in the country can be found in Chicago and Nashville. 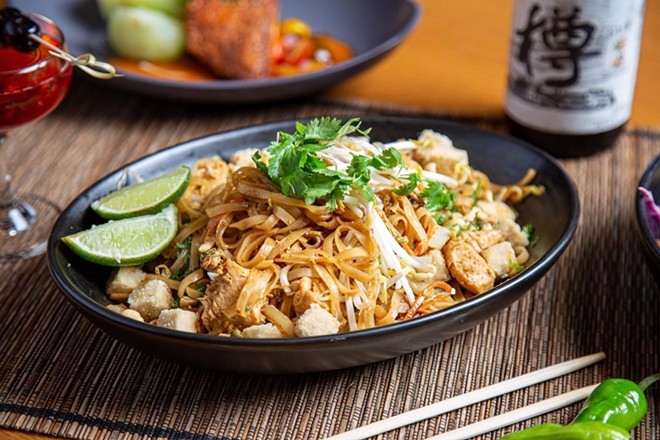 Sunda / Facebook
Pad Thai from the flagship Sunda location in Chicago.
With the recent debut of modern Japanese eatery Noble Rice and Chef Richard Hales’ Blackbrick on the way, Tampa is quickly becoming a hot spot for high-end Asian cuisine.

Midtown Tampa’s newest Asian eatery will occupy the space adjacent to The Loft and Element hotels. Although an exact address of the upcoming Sunda location has not yet been released, the TBBJ article states that the restaurant will be easily accessible from the Midtown Tampa commons, an outdoor space where activities are typically held.

Sunda is the culinary brainchild of actor, entrepreneur and restaurateur Billy Dec, who opened the flagship location in his hometown of Chicago. It’s only other location opened in Nashville in 2018, although an Eater article from last year states that Dec plans to open Sunda locations throughout the country.

The Filipino actor, who is known for his work on shows like "Criminal Minds" and "Empire," has several other businesses in addition to the restaurants. Dec also founded The Underground Nightclub and Cocktail Club and the advertising agency COACT, according to the biography on his website.

Drawing from the multifaceted cuisines of countries like China, Japan, Korea,  The Philippines , Thailand and beyond, Sunda's menu is a true culmination of Asian fusion. Options range from a la carte dim sum, noodle entrees, sushi rolls and sashimi, Filipino dishes like sisig and crispy pork belly and unique fusion items such as oxtail potstickers and bulgogi roti tacos.

There’s even a $150 Filipino feast of meats, seafood, rice and egg rolls served on a giant banana leaf—but you will have to get your hands a little dirty.

“By seamlessly melding most of the cooking techniques and flavors found throughout the entirety of Asia, Sunda creates a menu that allows customers to choose the dining experience they desire,” the restaurant’s website reads.

Beer, wine and a curated selection of cocktails also occupy a portion of the Sunda menu, stacked with signature drinks like its Lychee Luxury Drop— complete with vodka, elderberry liqueur, lemon and lychee wasabi syrup.

Sunda New Asian will be joined by Midtown Tampa’s other recently–opened restaurants True Food Kitchen, Don’t Kale Me Crazy and Oronzo, among others.

There are no social media handles for Tampa’s upcoming Sunda just yet, but you can get a good idea of its menu by following its Facebook at @sundachicago.