South Tampa and St. Pete are getting their own 'Starbucks of salad,' too.

Photo via sweetgreen/Facebook
A Sweetgreen in Brookline, Massachusetts.
Sweetgreen has plans to open a third Tampa Bay location on the ground level of The Pearl apartments in Tampa Heights. Located at 301 W Palm Ave. across the street from Armature Works, the location comes after news that the the Starbucks of salad already has plans to open in South Tampa's Hyde Park Village and Central Avenue in St. Petersburg.

Permit-obsessed Tampa Tomorrow points out that the latest Sweetgreen is supposed to be 2,711-square-feet, which is slightly bigger than the South Tampa location.

Architectural plans posted to the City of Tampa's Acela portal early this year show plans for a 572-square-foot patio with seating for about two dozen people.

As previously reported, the chain has an ambitious mission, which includes becoming carbon neutral by 2027, and Sweetgreen’s menu includes bowls for days, salads, a hot honey chicken plate, plus sides like buffalo cauliflower and focaccia bread.
click to enlarge 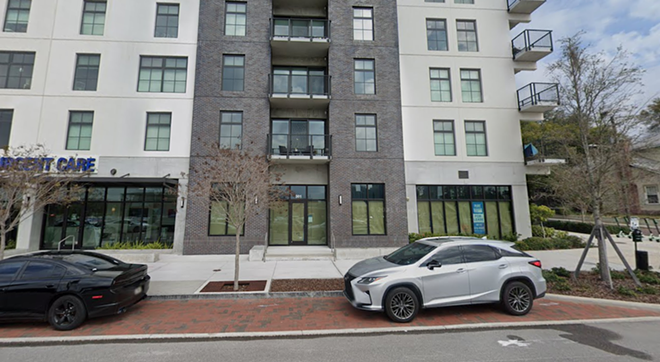 Photo via Google Maps
The future home of Sweetgreen at 310 W Palm Ave. in Tampa Heights.