Take a hike: Up and down the Tampa Bay Ale Trail, that is

A new way for residents and visitors to get a taste of the region's buzzed-about beer scene.

All it takes to "hike" the Tampa Bay Ale Trail — as founder Mike Dyer has dubbed the more than 400-mile stretch of craft breweries from Sarasota to Zephyrhills — is three steps.

Buy a passport, the pocket-size field guide that leads your brewery exploration.

Visit a brewery, where you'll purchase a beer while collecting a stamp (and an incentive or two).

Launched earlier this month, the new Ale Trail is similar to other passport-driven beer trails and bar-hopping programs, which tend to include some perks, around the country. Louisville, Kentucky's Urban Bourbon Trail has one. The Passport Program covers two-for-one drink deals in cities like Denver, D.C. and Nashville. And there's even something called PubPass for Pinellas and Hillsborough bar-goers, as well as a passport for St. Pete/Clearwater's Craft Beer Trail.

Dyer's program champions the local beer scene — and the region's still-growing number of breweries specifically, no matter how out of the way some of them may seem.

"Goal is simple, to build awareness and appreciation for all of the craft breweries in our region," according to Dyer, a longtime beer geek. "The program is designed entirely with breweries in mind. It's free for them to participate and offers a means to generate revenue." 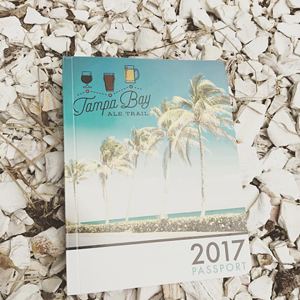 With a background in publishing and marketing, Dyer came up with the idea for his passion project after volunteering on a brewery packaging line in town. He says he got to thinking about the ways he could improve the place's awareness among both Bay area residents and visitors, which eventually led to the program's genesis.

"I have seen other 'trails' such as the bourbon trail, wine trail and other beer trails across the country, and attempted to take the best of those programs and enhance them with greater emphasis and benefits for the breweries," he said.

Passports, available for purchase online and in person from nearly all the participants, are essentially one-way tickets to beer nirvana that list contact info, bios, hours (kitchen hours, too, if applicable) and core beers from the featured beer makers. In addition to checking off the brews they've sampled, passport holders can rate each brewery on a five-star scale.

More visits equal more stamps, which equal more incentives — BOGO pints and commemorative swag among them. Hikers redeem their perks at the Ale Trail's regular passport holder meetups, scheduled for a different brewery monthly. Dyer acknowledged that there are existing social groups for swapping and sharing "whales" (sought-after, limited-release, hard-to-find beers), but he says he hopes the program also cultivates its own community of beer enthusiasts.

Close to 500 people have purchased a passport so far. New editions of the guides, good for up to 12 months, are planned every six months. The idea is to get additional breweries to come on board.

"To say it's possible to visit them all in a weekend is suicide," Dyer said. "I've done it, without more than a couple beers, and do not advise it. Enjoy in moderation. Take it slow and enjoy the breweries. That's what this is all about."