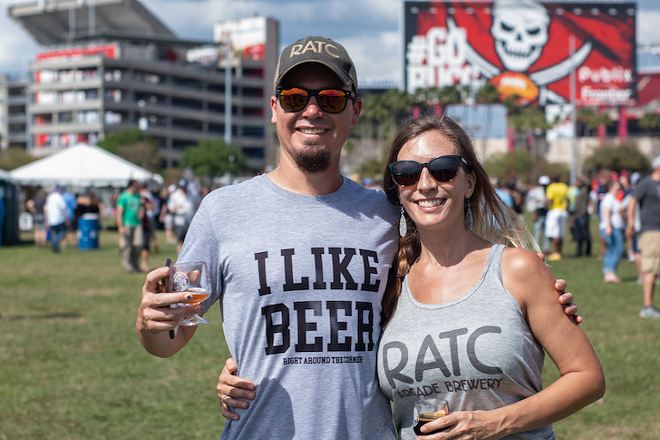 Get your aspirin and bedside glass of water ready, because Tampa Bay Beer Week—aka TBBW, officially set for March 7-15—is on its way back to give you a taste of some of the most prized beer money can buy.

From brewing competitions, to endless samples, to Cigar City’s highly-anticipated yearly release of its Hunahpu’s Imperial Stout, here are all of the beer-centric events—official TBBW events and non-sanctioned ones, too—that Tampa Bay craft brew lovers should attend.

Get links to all of these events below, and get the most up-to-date information via tampabaybeerweek.com.

Did we miss your event? Send us an email.

Brews and Tunes Channel your inner Bob Ross at this event chock full of art, music and of course—beer. Sip on locally-made brews from 81Bay Brewing Company while you watch certified Bob Ross instructors demonstrate his acclaimed "Wet-on-Wet" painting technique. If painting isn’t your thing, wind down to the tunes of The Hummingbirds’ rustic Americana while you enjoy the nostalgia of Bob Ross’ “Joy of Painting” videos. And after a few brews you’ll definitely feel more inclined to drop money on the Bob Ross merchandise raffle basket. Fri. Feb. 28, 6:30 p.m. Free. 81Bay Brewing Company, 4465 W. Gandy Blvd., Tampa. 81baybrewco.com

Beer, Bourbon, & BBQ Festival We love festivals with self-explanatory names. The annual celebration of smoked meats and booze makes its way to downtown St. Petersburg again, this time starting at Park & Rec. Your ticket price includes four BBQ samples, drink specials at every spot, and exclusive party stops at each destination—work off a few calories by traveling from bar to bar on foot. In addition to Park & Rec, participating bars in this year’s Beer, Bourbon, & BBQ Festival include The Avenue Eat & Drink, Crafty Squirrel, The Landing at Jannus and Thirsty First, among many, many more. Sat., Feb. 29. 12 p.m. $20. barcrawl-usa.com

The Ultimate Brewer Finally live your dreams as a Food Network judge during Tampa Bay Beer Week’s The Ultimate Brewer competition this March. Local brewers compete in a craft beer battle, in which they have to incorporate two unusual ingredients into their brews (come on, it’s just like “Chopped.”) The winner will be chosen based on a balance of two votes: “Consumer Choice” as chosen by the audience, and the “Pro Panel” chosen by the participating brewers. Tickets include a commemorative sampling glass plus samples of each of the contestants, and a 16-oz. Hidden Springs Ale Works beer. Fri. March 6. 7 p.m. $35, Hidden Springs Ale Works, 1631 N. Franklin St., Tampa. eventbrite.com

Florida Brewers Guild Craft Beer Festival The official kickoff to this year’s Tampa Bay Beer Week, and it aims to help raise money for the Florida Brewers Guild, a nonprofit trade association committed to preserving the rights of craft brewers throughout the state. Over 40 Florida breweries will sling their renowned craft beers, as well as samples of new brews. Tickets include a complimentary tasting glass and unlimited samples. Tampa’s Perry Harvey Sr. Park provides great shady areas to pass out under if you’ve had one too many samples. Sat. Mar. 7. 2 p.m. $45. Perry Harvey Sr. Park, 1000 E. Harrison St., Tampa. floridabrewersguild.org

The Brewer’s Ball Attendees get a taste of the Best Florida Beer Championship’s category-winning commercial beers while listening to live music, watching the award ceremony, and getting in on prime raffles. Come thirsty to work your way through the 150 brews on tap. Sun. March 8. Noon-5 p.m. $75-$125. Water Works Park, 1710 N. Highland Ave., Tampa. eventbrite.com

Queens of the Brewing Age Bingo Night This inaugural event kicks off with a networking happy hour that’s open to the public from 4 p.m.-7 p.m. and geared toward celebrating and promoting women in the craft beer community. Girls Pint Out Charity Bingo is on the agenda directly after, so keep the good vibes, and brews flowing. Mon. March 9. 4 p.m.-10 p.m. Free. 81Bay Brewing Co., 4465 W. Gandy Blvd. Ste. 600, Tampa. INFO

Beat the Brewers Have you been hoarding seemingly useless beer knowledge for years? If so, this year’s Beat the Brewers event is your time to shine. You and your friends can form teams to see if you can beat some of Tampa’s best craft brewers in a night of both Tampa Bay-based and national beer trivia. And if your team sucks, at least there’s still beer. If you miss this special beer-themed trivia night, you can attend Bus Brew Brewing’s weekly trivia on Tuesdays, which might be a little less cutthroat. Tues. Mar. 10. 7:30 p.m. Free. Brew Brew Brewing, 4101 N. Florida Ave.,Tampa. tampabaybeerweek.com

Brews, Cheese and Charcuterie Pairing Michael Landis, whose job title is “World Cheese Judge,” pairs five American artisan cheeses with five 81Bay beers. Learn a little about how they complement one another, or just listen to the sounds of yourself smacking gourmet cheese and craft beer, the choice is yours. Wed. March 11. 6 p.m.-8 p.m. $25. 81Bay Brewing Company, 4465 W. Gandy Blvd. Ste. 600, Tampa. INFO

Resilience Release Carrollwood Brewery pours Resilience pale ale to support those impacted by Australian bushfires. All Resilience sales will be donated to Wires Wildlife Rescue (stylized “WIRES,”) which is the largest wildlife rescue and rehabilitation nonprofit in Australia. The first 50 customers to purchase a Resilience pale ale receive a free Carrollwood draft card for their next visit (only one per customer.) Slide by for a good cause and get in on raffles and $4 jalapeño hushpuppies. Wed. March 11. 3 p.m.-11:30 p.m. Free. Carrollwood Brewing Co., 10047 N. Dale Mabry Hwy, Tampa. tampabaybeerweek.com

Craft Beer Junction Most TBBW events are hyper-focused on craft brews that are made right here in Tampa Bay, but Tarpon Springs’ Unrefined Brewery is doing things a little differently this year by teaming up with the London-based distributor Craft Beer Junction to bring a little international flair during this Tarpon Springs tap takeover. Come for tastes of some of the best and hardest to get European beers, and keep up with Unrefined Brewing’s Facebook page to get a first glance of the official tap list. Wed. Mar. 11. Noon. Free. Unrefined Brewing, 312 E. Tarpon Ave., Tarpon Springs. INFO

Bottle Drops Two days in a row Hidden Springs will be dropping exclusive bottles. Might want to swing by and snag a few for yourself. Check Hidden Springs’ social media for more details as the date approaches. March 12 and March 13. Hidden Springs Ale Works, 1631 N, Franklin St., Tampa. INFO

Wake up with Wakefield Pop on your Star Wars pajamas, crowns and your Biggie Smalls attire for the 4th Annual Wake up with Wakefield event. Made Coffee is providing free cold brew from 7 a.m.-9 p.m. to those in line. Vanchetta Food Truck is supplying the eats from 8 a.m.-noon and all attendees can snag pours of brews from designated beer stations all day long. Make sure to bring your own tasting glasses. Just a heads up, 5-ounce pour tickets are limited to 10 per person. Although cash purchases are encouraged, Hawthorne Bottle Shoppe can accept cards. Fri. March 13. 7 a.m.-3 p.m. Tickets are $6 each for a 5-ounce pour. Free admission, cash is king for drinks and food. Hawthorne Bottle Shoppe, 2927 Central Ave., St. Petersburg. INFO

Hunahpu's Day 2020 Next month, thousands beer lovers from across the country, along with over 100 breweries, gather at Amalie Arena to celebrate the 11th annual Hunahpu's Day—a day marking yearly release of Cigar City Brewing’s prized Hunahpu’s Imperial Stout (there’s a fucking copyright on “Hunahpu’s,” shysters.) Attendees sample some of the world’s rarest and most sought after beers, and tickets are a bit pricey, but at least they get you giant bottles of the coveted imperial stout, which is brewed with chile peppers, cinnamon, vanilla, and cacao nibs (then resold online for ridiculous amounts of money.) This is one of those niche Tampa events that you have to check out at least once if you’ve got the dough. Fri. March 13. 6 p.m. $200. Amalie Arena, 401 Channelside Dr., Tampa. cigarcitybrewing.com

Barrel Aged Day And another Tampa Bay Beer Week event bites the dust before the festival even kicks off. If you got your $100 ticket before it sold out, enjoy your pours and post on Instagram to give your fellow craft beer loving followers serious FOMO. Fri. March 13. SOLD OUT. St. Pete Shuffleboard Club, 559 Mirror Lake Dr. N., St. Petersburg. INFO

Confection Affection Day Angry Chair Brewing and Cycle Brewing are joining forces at Nebraska Mini-Mart to release three brews on draft and in 22-ounce bottles. Thanks to the loyal craft beer drinking crowd in Tampa Bay, this event is already sold out. Tickets were $155 for a single bottle and $250 for a double bottle allotment. Sat. March 14. SOLD OUT. Nebraska Mini-Mart, 4815 N. Nebraska Ave., Tampa. INFO

Beer & Burger Throw Down No need to leave the kids at home; the Beer & Burger Throw Down was created with parents in mind. While you take advantage of free samples from local craft brewers, your minis can burn off some energy in the “All You Can Play” Kids Zone for $7. Thinking about booking a babysitter, or don’t have to sweat the snot-nosed brats? You’ll have uninterrupted access to local restaurants and food trucks serving stacked burgers you’ll be voting on so that the throw down can decide who takes the crown in two categories: Best Signature Burger and Most Creative. Admission also includes live musical entertainment and a large outdoor game area. Sat. April 18. Noon-6 p.m. $5 ticket, bring extra cash for food and drinks. Safety Harbor Waterfront Park, 110 Veterans Memorial Ln., Safety Harbor. simplyeventsfl.com