Dunedin-based Feinstein Group has implemented the structure at all of its properties. 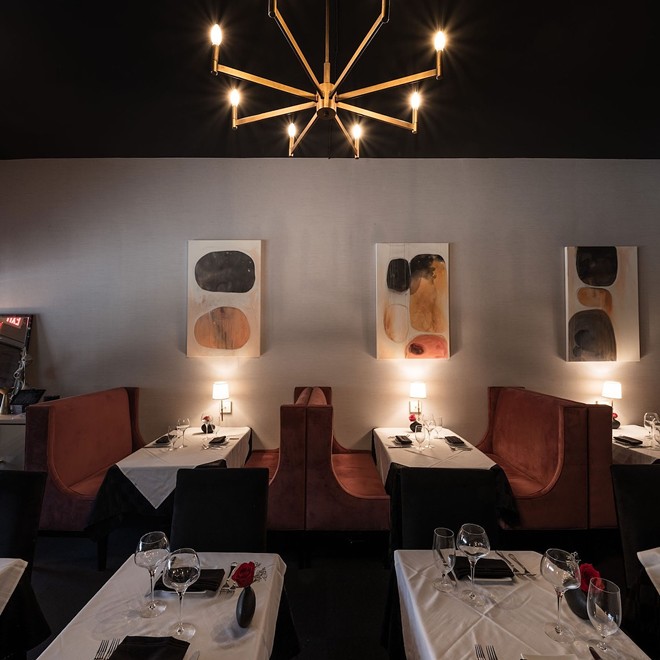 The changes are being implemented today at Black Pearl, located downtown at 315 Main St. The same changes are already in place at the Living Room and Sonder Social Club all within a mile of each other.

The restaurants are run by The Feinstein Group. The group, founded by couple Christina and Zach Feinstein, recently opened a second Living Room location in Wesley Chapel where the new compensation model is also in place.

In the most simple terms, the change moves tipped employees at Feinstein Group restaurants to a commission based model. The pivot is an attempt by the Feinsteins to get ahead of the increase in the minimum wage of $15 and provide a living wage not just for servers and bartenders but for TFG cooks, expos, dishwashers and other back of house staff, plus front of house staff like bussers and bar backs.

“A problem in restaurants for whatever reason, is that the humanity of an employer stops where the kitchen walls start. You have dishwashers working five jobs, four jobs, three jobs, whatever—and you got a server that's working 20 hours a week making $60,000 a year,” Zach Feinstein told Creative Loafing Tampa Bay. “But everyone's human and everyone deserves an opportunity to make some money.”

He and Christina Feinstein told CL that TFG pays employees depending on experience and skill set between $14-$20 on average for front of house support staff, and $15-$22 on average for the entry-level back of house positions. On the higher end, a line cook at one of their restaurants makes $26 an hour. 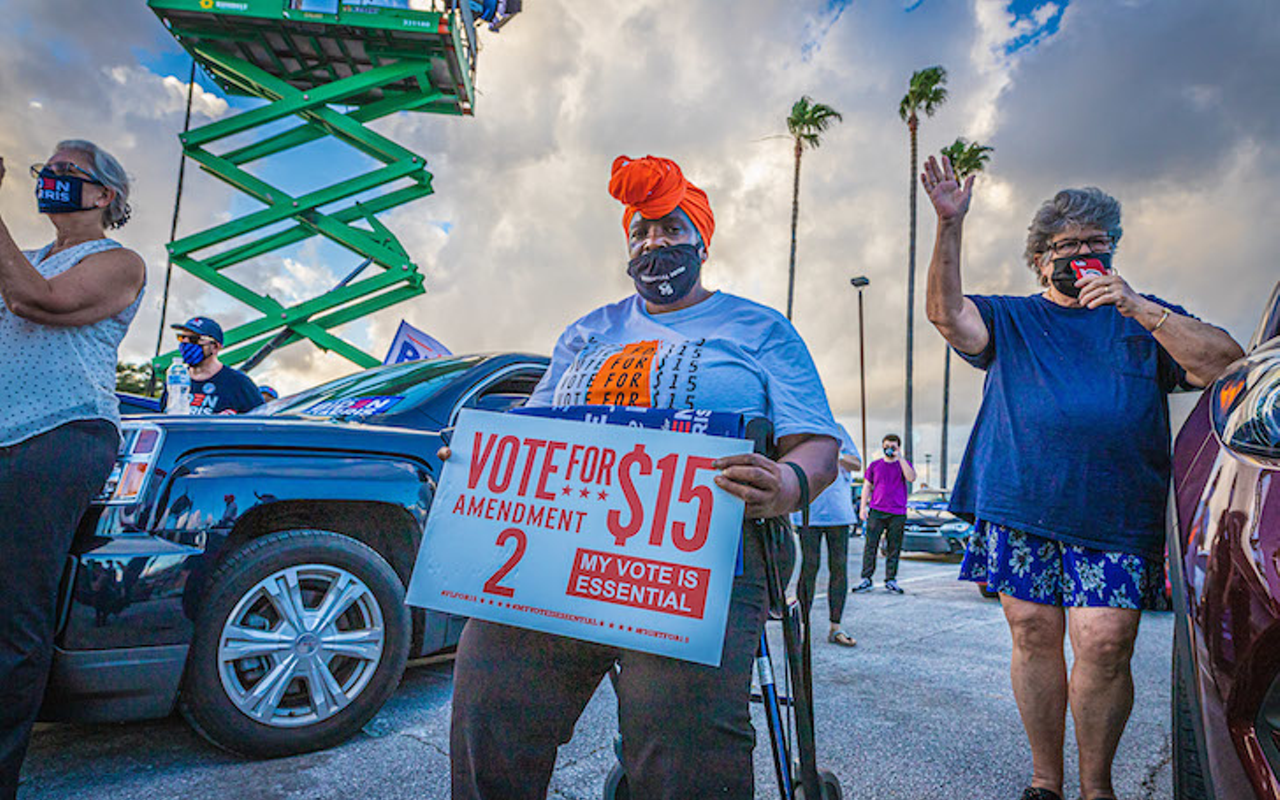 TFG’s now-retired tipped model was not much different from those in other restaurants across the U.S.

Servers and bartenders made their minimum wage, and collected tips from customers. Those tipped employees would then share some of their tips with bartenders and bussers at established rates.

At the Living Room in Dunedin, bartenders got 5% of a server’s alcohol sales while that same server would also tip out another 5% to the busser, according to a pack of materials TFG shared with CL.

Under TFG’s new commission model, the customer’s bill has an added 20% service charge. All of the money collected from the service charge goes towards front of house; paying servers and bartenders $1/hour helps TFG pay everyone else in the company more.

The commission rates vary at each TFG property based on staffing needs, but using the Living Room as an example, TFG says servers, who make $1/hour under the new model, get a 15% commission on sales (pre-discounts like comps or spills), with the extra 5% going to help increase the wages for non-tipped employees like cooks, dishwashers, bar backs, food runners, and bussers.

Bartenders at the Living Room also make $1/hour under the new commission model, plus a 16% commission on their own sales (pre-discounts like comps or spills). Bartenders also get an additional 2% of all restaurant sales—an expense from the TFG labor budget.

At the Living Room, and at all TFG properties, customers all have the option to leave additional gratuity that all goes to the individual bartender or server, but no longer do servers and bartenders have to tip out support staff.

Based on real data from The Living Room, TFG estimates that their servers and bartenders—who receive weekly paychecks—are all making more off the new commission-based model than they did under the tipped model where gratuity was dependent on the whims of the customer.

TFG—which consulted with Seattle restaurateur Chad Mackay to build out the model—also passed along nearly 20 positive testimonials from current employees. Shades Bar and Grill in Inlet Beach and Brotula’s in Destin are two Florida restaurants that recently implemented a 20% service fee where servers keep up to 17% as commission.

All TFG properties feature table tent explainers and a QR code that links to a video explaining the change. Most customers have been understanding, but Zach concedes that this model isn’t for all customers.
“I had one customer say, well, I usually tip 10%, where am I supposed to eat now?,” Zach said. “Go eat fast food, don’t eat here.”

“The main reason we did this was to ensure livable wages for all staff in the restaurant and a guaranteed and consistent income for previously tipped employees,” Zach added.

But some former employees recently let go from TFG restaurant The Black Pearl are also unhappy, and they took to social media this week to amplify their voices, leading to a whiplash of negative and positive reaction online. One Reddit post has reached nearly 4,000 users.

Tabitha Crewe was among five Black Pearl employees terminated last weekend, and claims that everyone who had pushed back on the new commission-based model had been let go. Christina and Zach, however, state that the employees were let go because they contributed to a hostile work environment and that it had nothing to do with the new structure.

After the terminations, The Black Pearl, a fine dining concept that seats 36 people, was left with only two servers and six back of house employees, leading to a temporary closure, which TFG calls a refresh and re-training with new staff. The restaurant reopens tonight—and former employees have planned a protest outside. Crewe expects ex-employees and their supporters to gather in front of the flagship Living Room location as well.

She also wishes that TFG had sat down with the front of house staff to fully explain the new model much sooner. The Feinsteins told CL that the new commission model was not yet built out for the Black Pearl when Crewe was let go.

Zach and Christina do, however, regret how they initially communicated their transition into the commission-based model.

“Hindsight is 20/20,” Zach told CL. “We thought we had done enough, but after the backlash we realized a full open book from day one would have better addressed a lot of questions we have since received from our patrons… We appreciate and value our employees, that’s why we did this.”

A breakdown of The Feinstein Group commission-based pay model, which is part of onboarding materials.
c/o The Feinstein Group
A social media post from previous Black Pearl employees states that the new structure “allows for owners to control the money coming into the restaurant, in order to reallocate it to cover their operating costs.” The Feinsteins dispute that claim and said the goal is to be able to pay a living wage to all their employees and that 100% of the service charge goes back to the staff.

Although Crew was suddenly fired last week, she says that she truly believes her former employers are good folks with the right intentions.

“Personally, I hope they have the most success but I think they need to figure out a better way to pay their employees,” Crewe tells CL. “ I have the utmost respect for the chefs and their food, and I do think it was a great place to work.”

“The truth of the matter is we aren’t competing with other restaurants for staff, we are competing for staff with Amazon, Google, and Big Companies with fat bottom lines,” TFG wrote. “This model ensures us to be able to attract top talent while always putting the employees first.”

For now, TFG, and the employees still on payroll will navigate the new waters. Only time will tell if they prevail.

UPDATED 08/30/22 3:45 p.m. Updated  Crewes' quote to make even more clear that all of the money collected from the service charge goes towards front of house; paying front of house staff $1/hour helps TFG pay everyone else in the company more.