Bake'n Babes, King of the Coop, Proper House Group and more are also pitching in.

Take it from someone who’s been ass deep in coronavirus related headlines for three weeks: Most of the news is dreadful.

Last Friday, The Pew Research Center wrote that restaurants workers are at a higher risk of losing their jobs during the COVID-19 crisis along with folks in industries such as hotels, child care services, retail trade and transportation services.

“Nearly one-in-four U.S. workers—38.1 million out of 157.5 million—are employed in the industries most likely to feel an immediate impact from the COVID-19 outbreak,” Pew’s analysis concluded. “Among the most vulnerable are workers in retail trade (10% of all workers) and food services and drinking places (6%). In total, these two industries employ nearly 26 million Americans.”

It’s stomach-churning, to be honest, but there are glimmers of hope, too, and a lot of it is coming out of the restaurant industry.

“As hard as this is, it’s the only way forward. With drastic measures now, we’ll be able to reopen and come back strong,” Gonzmart said in a statement. "Fortunately, we have history, experience and resources that will help us get through this. At the Columbia, we have survived World War I and II, Prohibition, the Depression, Urban Renewal and we’ll survive this, too, by making tough decisions now. We look forward to welcoming you back once this medical crisis passes.” 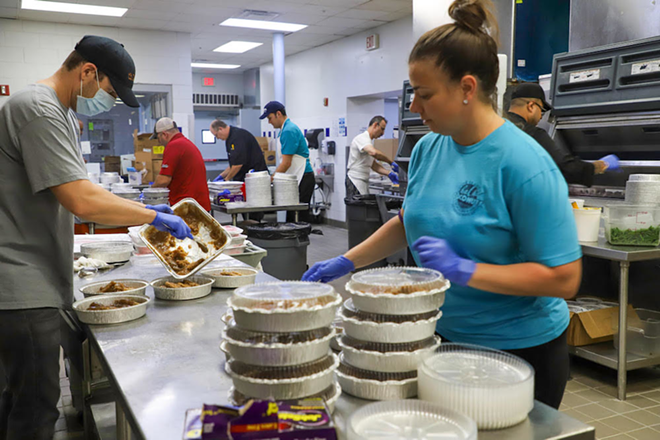 But with 90% of the company’s workers without a job, Gonzamart had to do something. That’s why 100% of money from gift card purchases before the end of April will go to the Columbia Restaurant Group Employee Assistance Fund. The fund is a pool of money that will be provided to employees at all the company’s brands. During the same period, for any purchase of $500 in gift cards, the  company is adding another $50 to the buyer’s order. Gonzmart—who forfeited his salary and returned his ownership check that represented the success the company enjoyed in 2019—also pledged to pay full health benefits for all furloughed employees until at least through April.

“The last thing you need to worry about right now is your health coverage,” he wrote to staff members on Monday.

Columbia also started providing pre-prepared staff-only meals for pickup in Ybor, according to a release, which added that meals for staff at other locations are planned in coming weeks at restaurant locations in Sarasota, Sand Key in Clearwater, Celebration and St. Augustine.

“We will overcome this, as a business, as a city, as a country and as a world,” Gonzamart added. “And when we do, I think it will be a kinder, gentler place to live. I promise we will celebrate together when we overcome this unprecedented challenge.”

But Gonzmart isn’t the only restaurateur stepping up for the industry.

In South Tampa, according to a release, Haven’s staff has agreed to donate all gratuities during the shutdown to the relief cause, in order to support charities like Feeding Tampa Bay.

In Seminole Heights, King of the Coop’s Joe Dodd extended a hand to Empamama owner Stephanie Swanz, who saw her 17 employees’ livelihoods cut off when Armature Works closed its doors. “He called and said, ‘Hey I have two kitchens, I’m not using one of them right now and it’s all yours if you need it.’ Joe completely opened his ‘home’ to us and I cannot even begin to fathom how thankful I am for that,” Swanz told Creative Loafing Tampa Bay. Now Empamamas is on UberEats and running an online store. “I’m fully committed to building from the bottom up so I can bring one employee back at a time. I may have been the one with the dream and the vision, but they are what makes our world go round and round and empamamas needs each and every one of them.”

Down the road, three Proper House Group concepts—Rooster & the Till, Nebraska Mini-Mart and Gallito—have come together under Rooster’s roof. Two weeks ago, chef Ferrell Alvarez and his partners laid off 41 employees. His new operation, “Rooster Re-Dux” opened with just 11 managers. Since then, he’s hired back 11 more workers for a total of 22 employees.  What’s more is that the concept teamed up with two customers who wanted to remain anonymous to introduce a “For Forks Sake” initiative. A medical fund was also created by customer AJ General.

“For Forks Sake offers a free meal to those on the front lines of this battle, as well as to those who might be struggling with income in the service industry,” Proper House Group wrote. “If you’re a medical worker, or hospitality worker, you can call in and get a meal on us (up to $20), just provide your proof of employment or medical ID.”

The group is taking donations to help grow the fund to feed and take care of those workers.

“Our world has been handed plenty of uncertainty lately, but one thing that is known,” Proper House added. “Kindness conquers.”

The Loft closes in Ybor City, The Salty Donut heads to Seminole Heights and more in Tampa Bay foodie news