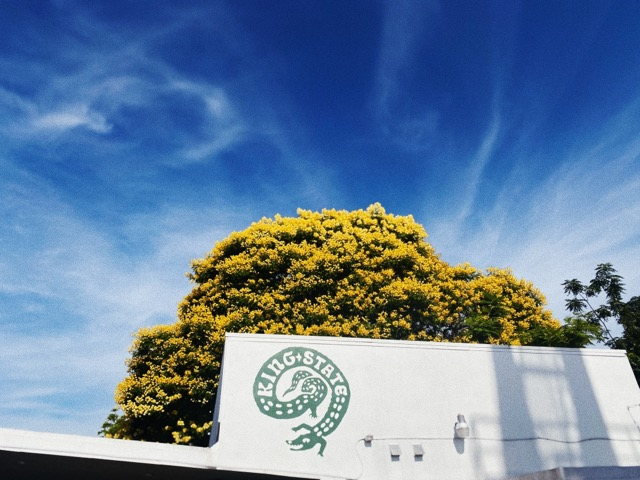 Nate Young
King State's big tree is routinely referred to as a "yellow poinciana" despite actually being a peltophorum.

At King State in Tampa Heights, there’s an incredibly gorgeous tree, more often than not dressed in yellow blossoms. Hillary Ann Faith Cole, who works at the shop, told Creative Loafing Tampa Bay that the tree—routinely referred to as a "yellow poinciana" despite actually being a peltophorum—is the biggest one of its kind she’s ever seen.

And while the tree doesn’t have a name quite yet, it’s been nice to see the coffee shop find a home underneath the plant’s breathtaking canopy (King State’s alligator mascot is named Bruce, by the way).

And that’s not all that’s blooming at Food & Wine’s no. 8 shop in America. There’s a brand new menu and a birthday party, too.

If you haven’t been to visit yet, do it this weekend when King State celebrates its second anniversary with a celebration featuring limited edition merch and anniversary 1.5-liter magnum bottles of its ridiculous “Deluge” beer (5 p.m. release). Birthday cake lattes complete with icing rims with green and orange sprinkles will also be dished out complete with crazy twisty straws.

“The lattes are ridiculous, our coffee director Gentry Houston made a special vanilla for it and is going all out,” King State co-founder Nate Young told Creative Loafing Tampa Bay, laughing. “And they’re gonna go fast, I don’t think we’ll even have enough to serve it on Sunday.”

Young said the Deluge—a gose series that King State brewer Aric Parker has made in the past using watermelon and other fruit— being served this weekend is fruited with mango, guava and blueberry, same as the recipe the shop used for its grand opening. King State’s pilsner will also be served in the magnums.

He’s also super-stoked on King State’s collaboration with winemaker Subject to Change, which he first got to taste in April. Simply called “Red Wine,” the chillable blend is 50% zinfandel with sauvignon blanc and syrah.

“It’s a natural wine, so it’s got that subtle hint of funk, but not too much,” Young explained, adding that it’ll be served by the bottle (retail and on-site consumption), plus on tap at the bar. “Having it at the bar in the reusable kegs is awesome because it lets us sell the wine by the glass at a lower price and lets us serve it at closer to cellar temperature, which is kind of what people want, especially since it’s so hot outside.”

And if you can’t make it to the shop for some Bruce juice, you can still get your hands on the wine in shops that already carry King State beer and canned cold brew. But if you do come by, know that Young and King State’s incredibly hospitable staff will be happy to see you.

“It’s our two year anniversary, but it feels way longer. In a lot of ways, last year was just a blur,” Young said, alluding to how the shop had to quickly shut down, retool its model and processes then re-open with a new pandemic protocol. “Our goal for the first anniversary was just to make it, and keep everybody on staff, so this ‘Terrible Two’ party is going to feel good to celebrate.”

“It’s only been two years in the neighborhood, but there’s a neighborhood feel that I didn’t expect to notice until five years in,” Young—who's been working on King State with co-founder Tim McTague since forever—added. “All the guests that’ve come in have really supported us, and we’ve gotten to know them. I feel like I’ve known them for years.” 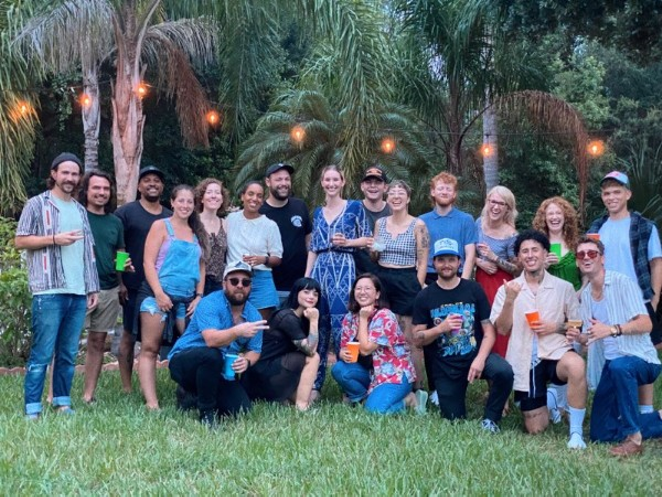 Nate Young (bottom right) said, 'Our goal for the first anniversary was just to make it, and keep everybody on staff, so this ‘Terrible Two’ party is going to feel good to celebrate.'

Read his 2016 intro letter and disclosures from 2022 and 2021. Ray Roa started freelancing for Creative Loafing Tampa in January 2011 and was hired as music editor in August 2016. He became Editor-In-Chief in August 2019. Past work can be seen at Suburban Apologist, Tampa Bay Times, Consequence of Sound and The...
Read More about Ray Roa
Scroll to read more Food & Drink Events articles