Rooster & the Till, Ichicoro and Rocca were rated as 'a great value.' 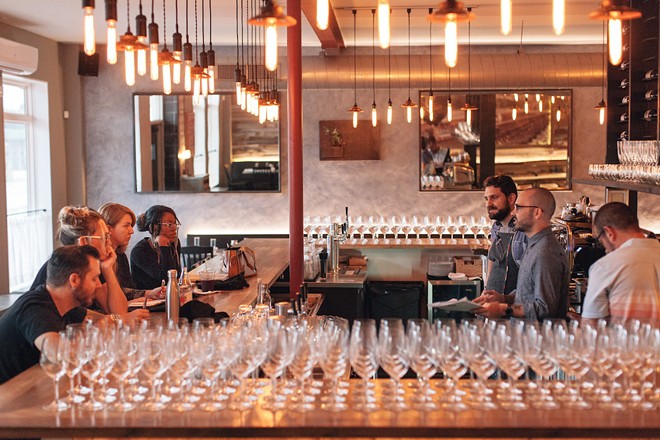 Ichicoro Ramen and Rooster & the Till in Seminole Heights, and Rocca in Tampa Heights earned Bib Gourmand designation, which Michelin recognizes as a great value.

"These are restaurants where one can have two courses and a glass of wine or dessert for under $49," Michelin wrote in a blog post.

See a full list of Tampa restaurants mentioned in the Florida Michelin Guide at the bottom of this post.

Restaurants in Pinellas County were not visited by Michelin inspectors because bringing the guide to the Sunshine State was an effort coordinated by Visit Florida, Visit Orlando, Visit Tampa Bay and Greater Miami Convention and Visitors Bureau—with Visit St. Pete Clearwater (VSPC) not included.

The Bradenton Herald reports that Michelin stands to make as much as $1.5 million from Florida tourism bureaus over the next three years.

In an email to CL yesterday, a spokesperson for VSPC told Creative Loafing Tampa Bay. "Although not part of the original three cities, we feel the concept alone elevates the culinary scene in Florida and brings attention to the high-level of gastronomy offered in the State."

Knife & Spoon is helmed by Chef Gerald Sombright, a friend of Rooster & the Till chef Ferrell Alvarez, who traveled to Tampa to cool alongside James Beard-semifinalist Alvarez in August 2021 for a guest chef dinner series.

“As you can see, Miami, Orlando and Tampa have very much to offer to international food and wine enthusiasts,” Gwendal Poullennec, International Director of the Michelin Guides wrote in the blog post.

“These talented chefs and their committed teams create culinary experiences matched only by the amazing attractions of each city. This very first selection of the MICHELIN Guide in Florida highlights glittery Miami, storied Orlando and breathtaking Tampa, offering a unique blend of international cuisine and Florida flavors. Local foodies as well as travelers will enjoy exploring these mesmerizing and rich Florida culinary destinations,” Poullennec added.

On Instagram, Ichicoro dedicated its award, in part, to its late co-founder and chef Branden Lenz

In a lengthy social media post, Alvarez wrote, “I have never been the one to measure success through accolades but two days ago I found myself desiring a Michelin Star more than I ever thought I would have.”

He cited the designation’s international acclaim and financial impact of a Michelin star in his reasoning, adding that his role at his Proper House Group “is to constantly push, create, teach, inspire and develop to the best of my ability so we can continue to grow and provide opportunities for our employees and ourselves.”

“I try and hold myself to a high standard and willingly bear a lot of weight on my shoulders,” Alvarez added, admitting that anyone who saw him at the Michelin ceremony is Orlando could sense his disappointment.

“...in retrospect, I should have handled myself better in the public eye, he said. “However, those who truly know me know I am a very emotional person and I wear my heart on my sleeve so what I displayed emotionally was reality for me at the moment.”

But Alvarez said that after letting it all sink in, the pride he felt by far supersedes any disappointment, adding that mentioned by the guide is an accomplishment in itself. On Friday, he even went into Rooster to be with his team, which was glowing with pride; the energy from guests, Alvarez said, “was infectious and exactly what I needed to reinstate my gratitude for my partners, our employees and my family.”

“The love and support I am surrounded with daily is amazing and I won't lose sight of that,” he said. “We'll see you on stage next year!!!”