Brew Bus moved out over the summer. 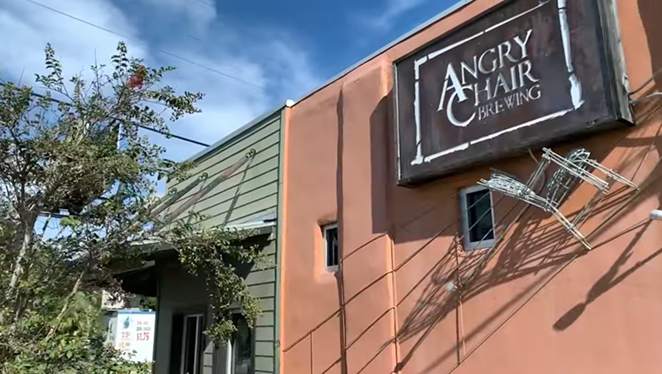 After 7 years of telling its loyal followers to stop parking on Fern, Tampa’s Angry Chair Brewing is giving its fans a parking lot… that’s two miles away at the old Brew Bus location.

The mega-popular Seminole Heights brewery made the announcement on Wednesday with a video that shows Angry Chair co-founder Ryan Dowdle waking up, ripping off a morning fart and then driving to work, right past the current Angry Chair taproom at the corner of E Fern Street and N Florida Avenue towards the old Brew Bus, which closed over the summer.

Brew Bus has plans of its own to move down the street, but Angry Chair wrote that the move—which will be complete sometime next year—feels long overdue.

“We have had a ton of fond memories with y’all the last 7 years, and we look forward to making more in our new space. We will keep y’all updated as best as we can with information in the short future,” Angry Chair wrote.

The move to a 15,400-square foot space means significant change for Angry Chair which currently operated within just under 3,000-square-feet.

That does not mean that jenga, yoga or trivia— definitely not hallmarks of its current location—will be added.

Dowdle told Creative Loafing Tampa Bay that there won't be any fucking Jenga in the new location, but that there will be a kitchen.

He added that the move allows Angry Chair to triple its production—going from 1,400 barrels to about "4,000-ish," and said the move will let the Angry Chair crew concentrate on more lager and IPA production.

"As for core production the move will allow us to make more Spacegrass IPA, an introduce Vodnik Czech-Style Pilsner a core beer. We plan on barrel aging a little bit more of our stouts and specialty beer, but not much more," Dowdle told CL.