And the 3rd annual Sweet & Spicy festival takes over Tampa’s Riverwalk next weekend. 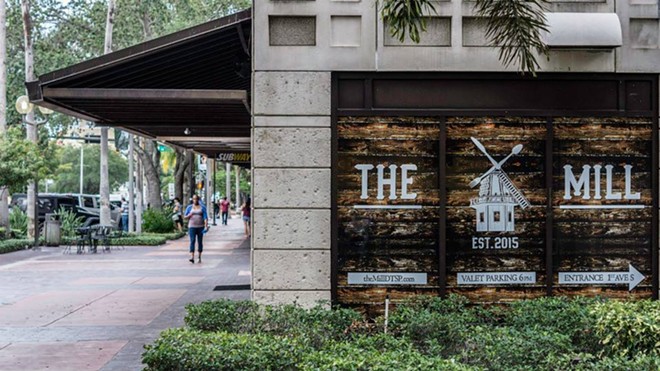 Peach Cobbler Factory Adjacent to the University of South Florida and Busch Gardens, lies Tampa's newest—and perhaps sweetest—dessert cafe. According to its social media, Tampa’s very first Peach Cobbler Factory celebrates its grand opening on Saturday, Jan. 7 at noon. With a menu absolutely overflowing with sweet treats, this new dessert spot offers a dozen cobbler flavors—ranging from cherry and apple walnut raisin to cinnamon praline, sweet potato pecan, strawberry and blackberry peach. Other desserts on the menu include massive cookies, milkshakes, cinnamon rolls, and 12 different banana puddings—which include flavors like Nutella, Oreo, peanut butter and jelly, coconut cream and New York Cheesecake. And if you can’t decide on one of Peach Cobbler Factory’s many treats, the chain also offers a dessert flight, where guests can sample four different sweets of their choosing. 5003 E Fowler Ave. Suite A, Tampa. peachcobblerfactory.com

La Cabana If you love specialty coffee, cigars and craft cocktails, then you might end up spending all day at this new open air lounge. La Cabana, Patrona Coastal Cafe's new nighttime counterpart, celebrates its grand opening on Friday, Jan. 6. at 4 p.m. Located right next to popular beachside spot The Getaway, La Cabana is an outdoor bar and lounge that will boast premium cigars, whiskeys, rum, beer, wine and desserts. If mojitos, espresso martinis and daiquiris aren't your thing, then maybe you can snack on La Cabana's coconut affogatos, key lime pies and coconut cloud cakes instead. The waterfront bar's full menu can be browsed on its website. After this weekend's opening, La Cabana will be open from 4 p.m.-10 p.m. on Fridays and Saturdays.13090 Gandy Blvd. N, St. Petersburg. patronacoffee.com

Busch Gardens’ Springs Taproom There's a new place to grab a drink at a familiar spot inside Busch Gardens Tampa Bay. The Bird Gardens area of the theme park now hosts the newly-opened Springs Taproom, located within the iconic Hospitality House. According to the park, the new concept features "modern decoration and classic photos, taking guests on a journey down memory lane," as well a full bar with a 12 tap rotating beer list, frozen cocktails and small bites. Opening in 1959, the Hospitality House is one of the more unique original structures inside the park. Of course, the space is mostly known fas the spot where guests could grab complimentary free beers. It's unclear if the park will continue that perk from this same space in the future. 10165 McKinley Dr., Tampa. buschgardens.com—Colin Wolf

The Mill New American eatery The Mill has been located at 200 Central Ave. #100 for eight years now, but its almost decade-long run has come to an end. “We are heartbroken to write this, but after almost a decade The Mill restaurant is closing,” owners wrote on Facebook earlier this week. The post goes on to explain that the massive and ongoing construction happening next door has forced its owners to close the downtown restaurant. However, The Tampa Bay Business Journal recently reported that the restaurant currently owes over $100,000 due to unresolved tax liabilities, in addition to being behind on its rent. The Mill’s Managing Partners, Jason Griffin and Chef Ted Dorsey, promise their customers that this isn't the end of the restaurant, stating on social media that they're currently searching for a new location in The Burg'. The Mill is known for its sprawling sidewalk dining area, unique craft cocktails and rotating menu of innovative New American dishes, cementing its reputation as one of the 200 Block's most popular restaurants. Its South Tampa location is still open. 200 Central Ave. #100, St. Petersburg .themillrestaurants.com

Dr. BBQ The downtown barbecue spot and its adjoining tiki bar Burnt Ends—both located on Central Avenue— served its last customers on Thursday, Dec. 29, according to a podcast from stpetersburgfoodies.com. The building that housed Dr. BBQ was sold about six months ago, and Datz Hospitality Group was renting the space from its new owners until last week's closure. Back in August, Datz Hospitality Group sold its 7,935-square-foot building for $4.5 million dollars to PTM Partners, a Fort Lauderdale-based company, St. Pete Catalyst reports. “It was a business decision, I had no say in it, but I do believe I would have done the same thing," Lampe explained in the podcast. "It's the nature of how things are going in St. Pete right now….the property value basically exceeds the interest in running a restaurant. That's basically what happened." The idea of another Dr. BBQ opening elsewhere in St. Pete is still a possibility, but Lampe could not confirm or deny the continuation of his signature restaurant. 1101 Central Ave., St. Petersburg. drbbqs.com

Torchy’s Tacos Self-acclaimed "damn good tacos" are finally landing in Tampa Bay, all the way from Austin, Texas. Located next to St. Pete's newly-opened Portillos—The Sunshine State's very first Torchy's Tacos is set to grand open on Wednesday, Feb. 1. From breakfast tacos loaded with bacon, egg and cheese to its infamous "Trailer Park tacos"—complete with fried chicken, green chilies, lettuce, pico de gallo and poblano sauce—Torchy's offers a wide range of unique Tex-Mex fare. Other heavy hitters on its menu include chips and queso, burritos, bowls and vegetarian options like its fried avocado tacos. According to its website, this upcoming location will also boast a full-service bar, set to sling margaritas, sangria, mules, beer and more. The night before its grand opening—on Monday, Jan. 30 from 5 p.m.-8 p.m.—St. Pete's Torchy's will host a free community party, a tradition within the company. ILovetheBurg says the event will feature giveaways, live music and a taste of its beloved tacos. 2314 Tyrone Blvd. N, St. Petersburg. torchystacos.com

Sweet & Spicy Festival A popular foodie festival takes place in Tampa next weekend, and its variety of eats are sure to cater to any palette. The 3rd annual Sweet & Spicy Festival happens from 11a.m.-6 p.m. on Saturday, Jan. 14 and 10 a.m.- 4 p.m. on Sunday, Jan. 15 at Water Works Park, located in Tampa Heights. Next weekend’s festival is free to attend and both pet and child friendly. This celebration of all things spicy and sweet is hosted by Your Tampa Markets, a local event organizer that brings a variety of food, art and vendor-focused events to Tampa’s Riverwalk and beyond. Although the full list of local businesses and food trucks participating in this year's Sweet & Spicy festival has not yet been released, its organizer says over 70 vendors will be scattered throughout Tampa's Riverwalk. Live bands will also take over the Water Works Park bandshell. A variety of different sauces, jams, salsas and desserts will be available to enjoy by the Hillsborough River or taken home. 1701 N Highland Ave.,Tampa. yourtampamarkets.com

Florida State Fair announces its 2023 food lineup There won't be a pickle pizza controversy this year, but the food lineup for the 2023 Florida State Fair is here and there's at least one controversial item to debate. It's unclear why it took so long to come up with, but the classic Tampa Cuban is getting a remix when the fair puts its insides—ham, roast pork, salami, Swiss cheese, pickles and mustard—between two funnel cakes topped with doughnut glaze. Another very-Florida food, Key lime pie, gets some attention thanks to a fried version featuring Key lime pie filling, graham crackers and buttercream frosting atop mini donuts, but the rest of the new additions are pretty familiar. The Florida State Fair happens Feb. 9-20 at the Florida State Fairground in Tampa. Gates open at 11 a.m., and tickets are $6-$10 with ride and fast pass options starting at $20. floridastatefair.com —Ray Roa

La Teresita lands on Food & Wine's list of 'Best Diners in Every State' Tampeños, plus Best of the Bay voters and critics, already know that La Teresita is a gem of a restaurant, but Food & Wine made it official in its list of "The Best Diners in Every State." Published over the summer (yeah, we slept on the news, sorry), the magazine's editors said that La Teresita, located at 3248 W Columbus Dr. in West Tampa, "is perhaps the city's most famous Cuban restaurant." They lauded the horseshoe-shaped counters, budget-friendly helpings of ropa vieja, buttered cuban toast and cafe con leche, adding that, "soaking up the vibe is half the point." La Teresita was one of two Florida restaurants to make the list alongside Sarasota Amish food mainstay Yoder's, which was praised for "big breakfasts, crispy broasted chicken just like they do it up north, and a sometimes overwhelming selection of pies."—RR