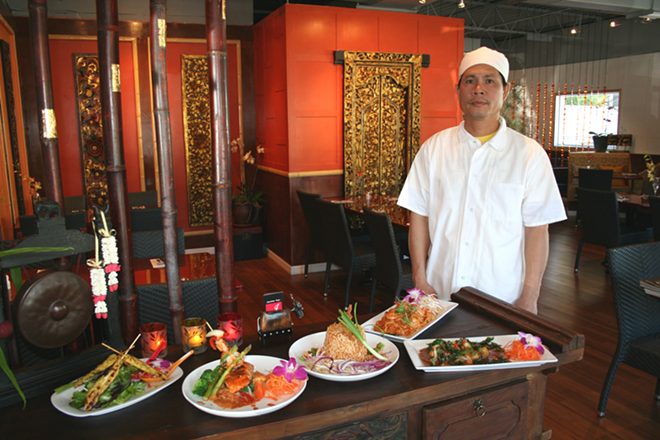 Photo by Eric Snider
THAI ONE ON: Ken Suksawatnumchok, chef and co-owner of Jasmine Thai, presents an array of dishes in the new Westshore location.

When Jasmine Thai recently moved from Kennedy Boulevard to new digs on S. West Shore, I thought I’d give it a try. Friends had spoken highly of this long-standing Tampa fixture, albeit without the fawning worship they reserve for local Asian restaurants that cater to less Americanized palates. And in that, they are entirely correct.
Jasmine has gone the way of so many Thai restaurants over the past decade, taking a belt-sander to the rustic and powerful nature of this vibrant Asian cuisine until what’s left is entirely agreeable, rather tasty and a bit dull. Eating here is like going out with your safety date for an enjoyable, if not passionate, evening.
Larb gai ($8.95) and yum beef ($8.95) both fall well short of the blazing heat and bright acidity that can elevate these simple salads to the realm of true greatness. The meat in both is still cooked well and seasoned with fish sauce, though, and the veggies are assembled competently enough to create a couple of fine little dishes, but I’m left thinking about what’s missing.
Dumplings ($5.95) are dense and bland, and the summer rolls ($5.95) come out tired and a bit dry. Fried appetizers do a better job, especially the hand-wrapped spring rolls ($5.95) loaded with pork and mushroom, and wonton shells ($5.95) stuffed with a profusion of ground peanuts and more pork. None of the sauces on the side add much, but you can ask for the caddy of spicy seasoning to jazz everything up a tad.
It almost seems that Jasmine Thai wants to tease the average consumer by hiding the most recognizable and ordered dish in the Thai repertoire — pad Thai ($9.95) — under a flap in the back of the menu. Although the restaurant uses a surfeit of bright tamarind that tinges the noodles in this national dish red, it’s a one-trick pony with little else going on. Better, although still subdued in flavor, are thick, stir-fried egg noodles ($9.95) coated in an oily sauce punctuated with black pepper.
Curries are where Jasmine, and every other decent Thai restaurant that aims to please the masses, excels. There’s something about the comforting, flavor-intensifying richness of coconut milk that makes everything seem better. Throw some nicely cooked shrimp and deep-fried soft-shell crab into a rich Panang curry ($14.95) dotted by bell peppers and you have a hearty dish that’s almost aromatic enough to satisfy a Thai junkie.
Jasmine’s pad prig ($9.95), on the other hand, lacks the herbaceous punch of massive basil infusion needed to accent this milkless curry. That fundamental green herb was also nigh absent from a plate of hot pepper basil stir-fry ($9.95). Wasn’t noticeably spicy, either.
Sometimes the tendency to hack off the rusticity of traditional dishes pays surprising dividends, like in Jasmine’s volcano shrimp ($13.95). At first taste, the thick blanket of sweet tomato sauce over veggies and shrimp seems incongruous. A few bites later, though, and I’m digging the slow burn of spice, obvious sugar and subtle herb. It’s not a dish I’d expect to like, but it grows on me along with the tingling heat.
Is it damning to call a frequent dating companion reliable? Dependable? Good qualities, perhaps, but not the most desirable. With restaurants, it works out about the same. I wouldn’t drive across the city for a meal at Jasmine, but I’d certainly keep it in my little black book, to be dialed up when convenience, proximity or a desire for simple pleasures is called for.

Openings
Red Mesa Cantina (128 Third St. S, St. Petersburg, 727-510-0034), a spin-off of the popular St. Pete Mexican spot, celebrates its grand opening this week. The restaurant is located in the former DeSanto spot under Push Ultra Lounge and has teased diners with a big New Year’s dinner and a couple of “soft opening” nights last week.
“We had some friends in town, and the menus were done, so we opened for the [BCS Championship] game,” said manager Pete Veytia, son of Red Mesa owner Peter Veytia.
The menu here is more pan-Latin than Mexican, with an extensive list of ceviches, numerous taco styles built on fresh corn tortillas, and a slew of dishes that borrow from all over South America, like mofongo with pork carnitas, empanadas, churrasco skirt steak and shrimp with coconut milk. Prices are surprisingly low, with most starters $8 and under and main courses in the mid-teens.
The restaurant will be open for lunch and dinner every day but Sunday, and plans to stay open as late as the lounge upstairs: 11 p.m. Monday through Wednesday and 2 a.m. Thursday through Saturday. “We want to take advantage of all the people who are staying out late in downtown St. Pete,” explained Veytia.

Formerly Chateau France, then Chateau SoHo, then Manny’s Bistro — all in about 18 months time — the building at 516 S. Howard in SoHo is gaining a more stable tenant. Jeff Gigante and partners, aka the Ciccio & Tony’s crew, will be inserting their own concept into the space, called The Lodge. Rumors have The Lodge serving traditional Italian cuisine, and it should be open within the next few weeks.
Between his Daily Eats, The Lime, Ciccio & Tony’s, Water, and now The Lodge, it looks like Gigante owns about half of the entire SoHo dining scene. If he ever gets together with rival entrepreneur Tommy Ortiz, someone will have to file an antitrust suit.