The Season 8 competitor might've gotten the boot, but he said he still feels like he won. 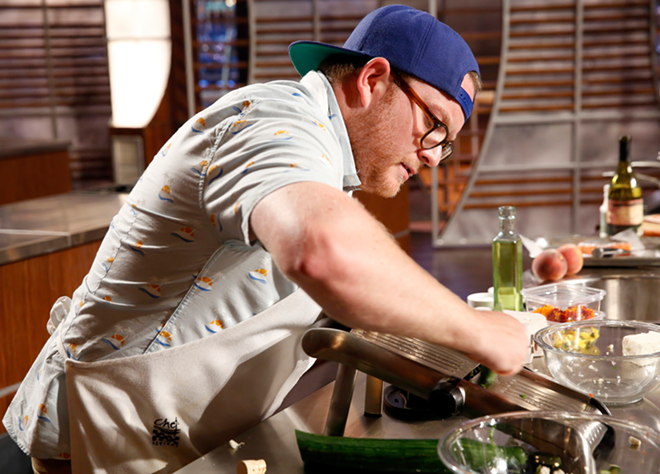 Forty home cooks and 18 weeks later, Tampa's Jeff Philbin reached the end of his MasterChef adventure on Wednesday evening. The director of marketing for Helicon was sent home with Detroit minister Yachecia as part of a double elimination.

To be fair, though, Yachecia's name was announced first in that Episode 18 moment, so, I'm just saying: Philbin made it to the top five (top five, Tampa Bay!) — even if it was a short-lived victory.

During his final watch party for charity in the crowded bar area of Fodder & Shine (Eckerd Kids and Friends of the Children's KidVestment program was in the spotlight), CL caught up with the local Season 8 competitor post-elimination. There's no denying Philbin got the boot from cheffy judges Gordon Ramsay, Christina Tosi and Aarón Sánchez, but he said he still feels like he won.

"There's not one city that was recognized more in name dropping than Tampa. That right there is an accomplishment," the Carrollwood resident said. "To young professionals out there that have a dream, go out and do it. I was able to do that, and I was able to beat out 44,000 people in this entire process to get down to number five. That was pretty cool. I may not've been America's MasterChef, but I sure as hell am gonna try to be America's next MasterDad."

Matter of fact, the most incredible part of the whole process was seeing his son and wife walk into the kitchen, alongside his opponents' family members, this week. They've been his driving force since the beginning.

"Holden and Beth came out and surprised us all by being there. It really put into perspective why I was doing this, because to a lot of people that would be crazy. When I left he was 2 months old, and when I saw him in that moment he was over 4 months old. So for over two months of doing this — not seeing him, not being able to even get a picture of him — it was just an incredible opportunity to feel him and to hold him and to know that I'm his dad," said Philbin.

Folks who caught the two-hour show last night watched our guy scurrying to finish his Elimination Test dish. As the Mystery Box winner, Chicago nutritionist Cafe dealt out times to each bottom cook, ranging from 60 to 20 minutes, strategically targeting Philbin, the last contestant to start cooking. He ended up presenting a plate of raw salmon, which he told Ramsay was intentional.

But was it really?

"Truth? Nah. In fact, they didn't really show — I started another dish. I was doing a dish that would've worked within the time, but Gordon Ramsay came to me and said, 'Hey, look. You can't do that. You've gotta do this,'" he told CL. "I was going to make an incredible egg roll that I could've actually pulled off in that amount of time, cooked the salmon right. But I listened to him, I believed in him, and I did just that. Unfortunately it didn't work out with the time that was allotted, but I did the best that I could with what I was given, and it's OK to be number five."

Thank You For Being A Part Of My #MasterChef Journey! Click here to read my official statement & appreciation letter https://t.co/SUxTtT8nVD pic.twitter.com/uvCO2hSTuX


Despite the series depicting him as this sort of "villain" character that nobody could get along with, Philbin — who never won a team challenge and snagged a lot of screen time throughout the competition — thinks viewers received an accurate portrayal of who he is. They saw a lot of the ups and downs, but also his consistency, passion and 110 percent energy, as he put it.

"At the end of the day, it's always gonna come down to a little bit of editing. It's going to be what they want you to be and how they want you to be in that moment, and the one thing that was really special about this journey, particularly for me, was that, yeah, I did get featured quite a bit," Philbin said. "They really did show a lot of me, and I'm very humbled and grateful for that because what that allowed was a story arch almost.

"You got to see me when I was a hero on the beach, and then you saw me as the villain when I turned heel when we were at the hotel against Yachecia, and then you got to see me just saying, 'You know what? I'm not backing down. I've got a big target on my back, everybody wants me out, but I'm not going anywhere.'"

Not to mention, he was able to donate a good amount of money to local nonprofits through those watch-parties-meet-fundraisers in Seminole Heights.

"Every week there was a brand new charity that was presented here at Fodder & Shine, and without the support of their team this would've never happened. I'm excited to see what tonight is going to net out at, but it was several thousand dollars every week collectively, for an array of organizations, that was really able to make an impact on the Tampa Bay community," he said.

"Jason is a tremendous cook in the kitchen — he is just beautiful. I'd really love to see what he can do. Dino has definitely shown that he's rising in the ranks. And Eboni is really unique, so it's gonna be interesting to see if she can cook something special," said Philbin. "There's definitely a good trifecta right there."