There’s a new kid on the block and he’s taking no prisoners. The ’hood in question is where S. Howard Ave. ducks under the Selmon Expressway. This is culinary Mecca; home to Bern’s iconic steakhouse that’s often referred to as the country’s best, and its younger sister, SideBern’s, my choice for the number one restaurant in all of Tampa Bay.

As I continue down the block toward the navel of the new Epicurean Hotel and enter the welcoming embrace of the ample valet parking hub, I can’t help but think back to the three times last year I was lured by the siren’s song of great new restaurants with exciting designs that set my heart a-pounding, only to have my palate crashed upon the rocks. 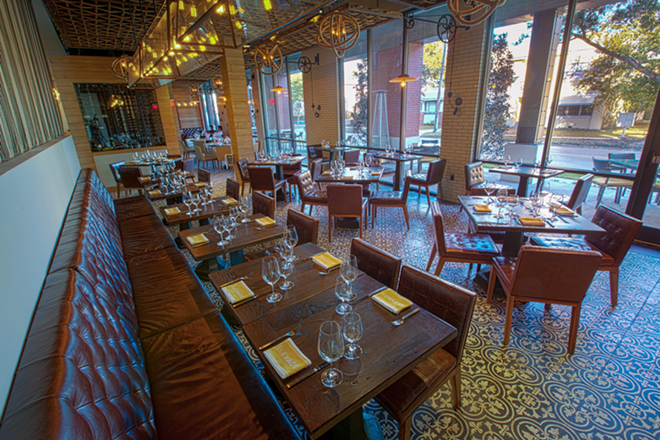 Chip Weiner
CURB APPEAL: Floor-to-ceiling windows in the Élevage dining room look out on S. Howard Ave.
When I look at the Élevage menu online, I’m not exactly sure where they’re going; it seems far too casual for a restaurant designed for Epicureans. What I missed is Executive Chef Chad Johnson’s watch cry, “I want to take the great iconic dishes, the ones you’ve loved your entire life, and elevate them. I want it to be the best you’ve ever had.” Still, I enter the lobby with the skepticism of an online dater: “Is this just another pretty face?”

The front desks on your right certainly catch the eye; they’re handsome glass coolers packed with wine. All that’s missing is an “In case of emergency, break glass” sign. Opposite, is the newly relocated Bern’s Fine Wine & Spirits. In case you’ve got three lonely Ben Franklins burning a hole in your pocket, there’s a bottle of PlumpJack’s cult Napa Cab waiting for you.

Continuing down the lovely lobby, you reach the entrance to the stunning Epicurean theater, which has to be one of the sleekest culinary classrooms in the country, but giant decorative cutlery makes me feel like Jack just stepping off the beanstalk. I hesitate briefly, but hearing no “fee-fi-fo-fum,” I decide it’s safe to proceed to the restaurant. The space eschews tablecloths, but the dark wood tables, leather, tile and enormous floor-to-ceiling windows make an appealing, if noisy, space.

Deciding on appetizers is a difficult task, as there are numerous mouthwatering choices. We finally settle on escargot Parmesan with crispy snails, mozzarella and San Marzano tomato sauce; it’s an Italian twist on a French specialty usually based on garlic and herbs. The flavors nail classic Italian at its best,but the escargots are lost. 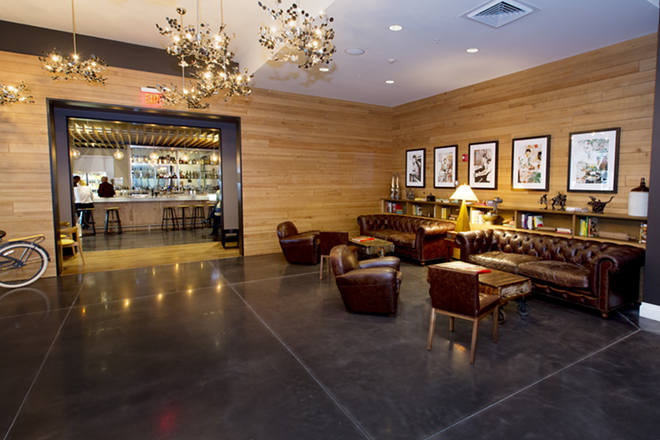 However, the elevation of our other choices ranges from delicious to transcendental. The bikini sandwich is essentially an upscale Spanish-inflected grilled cheese with jamon and Manchego. It’s served on a long rectangular plate as a quartet of four small perfectly caramelized crustless triangles, each topped by a bit of apricot chutney with a touch of white truffle oil. Luscious pork belly kicks up a traditional choucroute garnie, with creamy sauerkraut and whiskey-pickled apple.

The thrilling starter, though, is called “fish and chips,” but battered cod and French fries are nowhere to be found. A square slab of slate is used as a canvas for brushstrokes of ranch tartar sauce topped with a few small squares of seared sushi grade tuna. Each piece of luscious, fatty fish gets a sliver of tiny fried pickle, a few diminutive crisp potato chips, some micro greens and a lighter-than-air ball of suspended malt vinegar. The surprising juxtaposition of flavors and textures is an unforgettable triumph. Chip Weiner
HUNGRY MAN: Egg Basquaise with chorizo, potato, sweet peppers, and spinach.
As we move to entrees, a second of Chef Johnson’s dishes is also the culinary equivalent of David Copperfield levitating. Hanger steak is known for its great beefy flavor, but it’s often tough; you trade texture for taste. However, when prepared “sous vide,” another modernist technique that cooks long and slow in a scientifically controlled waterbath, proteins may be served rare, yet rendered fork tender. The kitchen surrounds a long marrow bone, split lengthwise, with gorgeous chunks of rare beef swimming in a heady hickory smoked bordelaise sauce, a French staple that’s a time-consuming reduction of red wine and demi glacé, an ultra-concentrated stock. And the ubiquitous steak house creamed spinach ends up as croquettes that wrap the soft veggie in a crispy shell for garnish. It’s the most flavorful beef dish I can remember.

Not to diminish the other entrées, which are splendid. Cedar plank salmon is served with Brussels sprouts, hazelnuts and apple lambic fruit beer glaze. “My Sunday Supper” features tender vinegar-sauced country pork ribs, creamy white beans and cornbread in the shape of madeleines that would make Proust proud. And a casserole of shredded lamb shoulder lasagna layered with chunks of rich meat, spinach, creamy Italian taleggio, chestnuts and rounded out with a touch of Greek oregano is superb. Élevage also offers a menu of “sides, garnitures and entremets” featuring artisanal bread, vegetables, starches and three kinds of mushrooms. Our choice of tiny button mushrooms caramelized in ham fat with tamarind is a nice way to gild the lily.

Chip Weiner
FROM THE SEA: Fish and Chips with seared tuna, fried pickle chips, malt vinegar and ranch tarter sauce.
The dessert selections are limited, but luckily there’s no key lime pie, cheesecake or crème brûlée in sight. We skip the cheese and chocolate pavé in favor of the two fruit options. Both the scorched banana caramel tart and the red fruit shortcake with buttermilk lemon cream and graham cracker ice cream are outrageously good and quickly disappear.

As one would expect, the cocktails are expertly made and the wines by the glass feature some real gems. More importantly, the Edge Social Drinkery rooftop bar brings the same touch of sophistication to Hillsborough that The Canopy does to Pinellas. The view is not as spectacular, but the subdued lighting and ample seating lend themselves to discreet assignations.

I know we’re months away from the Best of the Bay, but Chad Johnson and Élevage have clearly thrown down the gauntlet for Best Dish, Best New Restaurant and Best Chef. “Take that, sucka.” Yep, there’s a new kid on the block. And he’s grabbed the shiny sheriff’s badge from his siblings. Bern’s may have the world’s greatest wine list, and SideBern’s may offer the Bay area’s most sophisticated tasting menus, but the Epicurean has Élevage. I mean, seriously dude, that place can levitate.