UPDATE: This event has been postponed amid coronavirus concerns. 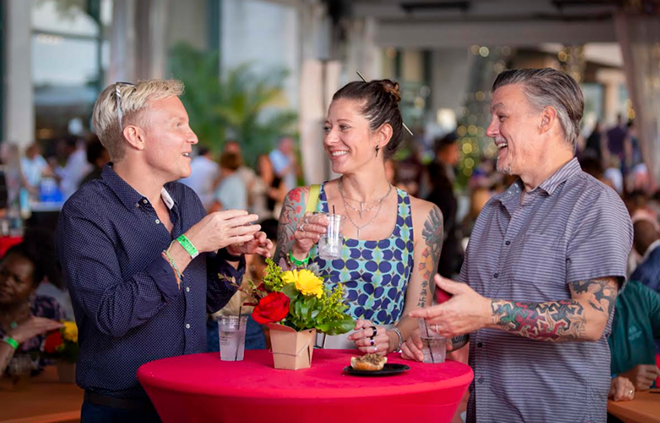 On Friday, March 13, Straz Center announced the postponements of all events through April 19. A press release says Straz Center is working to reschedule as many things as possible, and that the ticket sales office will be in contact with patrons soon.

We're just one month away from the return of Taste at The Straz (stylized "TASTE @ The Straz").

On April 4, attendees can eat and sip their way through vendors along the Tampa Riverwalk just outside of The Straz Center for Performing Arts. Now in its 35th year, the fundraising event has accumulated over $3 million for arts education programs—you're basically getting boozy for a good cause.

As of right now, the event has nearly 40 local restaurants locked in. Heavy hitters include Besito Mexican Restaurant, Columbia, Flames Indian Cuisine, Noble Crust and Bavaro's. Save room to satisfy your sweet tooth, too, as Alessi Bakery and Deli, Nothing Bundt Cakes and Revolution Ice Cream are also on the list.

General admission tickets run $85, and include unlimited food samplings, full open bar (you have to be 21 & up, duh), specialty wine and beer tastings and live music. VIP tickets are $150 and allow attendees early admission plus access to an exclusive VIP lounge. Tickets are now on sale through strazcenter.org, by calling 813-229-7827 or at the Straz box office located at 1010 N. Macinnes Pl. in downtown Tampa.