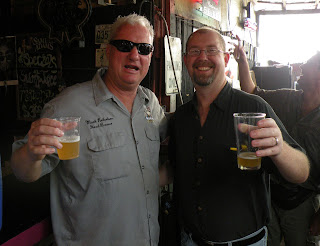 This event is a tough one to get into, though. With a strict limit on the number of tickets, and with most of them first given to the brewers and their families, most of the rest are then distributed to the homebrew clubs. Needless to say, it is not easy to get your hands on a ticket.  This is one of those times where knowing people is important. Not that anyone can "get you in", but they might know someone who is selling their ticket or can't attend.  But it is absolutely worth the effort to find one.


Skipper's Smokehouse is a great venue for rock and blues bands, and it lends itself well to this very loosely-structured event. One of the most enjoyable things, as always, is getting to meet many of the brewers whose beers I greatly enjoy.


I was especially excited to meet and spend some time talking with Mark Robertson (pictured at right) of Pensacola Bay Brewery in -- you guessed it -- Pensacola.  They are a new brewery to the scene, but have some very good beers.  I had their Lil Napoleon IPA last year at the FBG Fest, back when Mark was still brewing out of his back yard.  Now they are a "real" brewery and the quality is still excellent. I was very impressed with two of their Gold Medal winners, the DeLuna Extra Pale Ale (actually a Kolsch-style) and the Banyan Brown Ale. I really look forward to visiting Mark up in the Panhandle at some point and checking out the brewery in person. 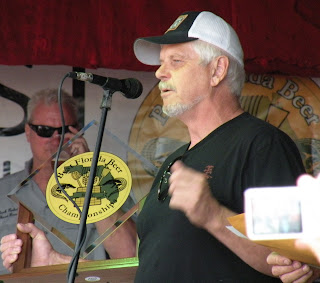 The big story of the day was Swamp Head Brewing (left) taking home seven gold medals and also winning first and second places in the Best of Show awards. Their Blackwater Floridian Dark Ale was the big winner, with their Smoke Signal Smoked Porter taking the second spot. I got to try both and they were incredible.


Of course, Cigar City was represented in grand fashion, offering up five of their best beers (including the highly touted Hunahpu Imperial Stout), and it is always just fun to 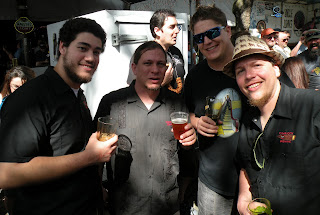 hang out with the CCB guys (pictured below). It was also great to see Peg's Cantina from Gulfport get recognized for their Dancing Cody IPA, which is a fantastic beer brewed by Peg's son, Doug Dozark, right behind their restaurant.


So a grand time was had by all, no question. This is definitely an event worth going to, and taking whatever steps are necessary to secure one of the highly-coveted tickets. It is a lot of fun to try top-notch beers that are not otherwise available in the area, as well as meet and spend time talking to other craft beer lovers. 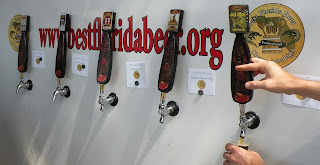 Last year, after attending the Florida Brewers Guild Beerfest in Ybor City, I set a personal mission to be able to attend the Brewer's Ball this year that was held last Sunday, March 6th, at Skipper's Smokehouse in Tampa.

For those who are unaware, the Best Florida Beer Championships is a "not for profit organization founded by craft beer lovers, homebrewers, and commercial brewers in the Tampa Bay area."  To sum up their mission, it is to promote craft beer in Florida through both commercial and homebrewing competitions. This all culminates with the Brewer's Ball, a "small" festival and celebration of craft beer in Florida.  There were 500 people admitted, period.  28 Gold Medal-winning Florida beers, 13 mystery homebrews from around the state, live music, free food, amazing raffle prizes and the presentation for the 'Best in Show' awards, as well as a prize for Best Homebrew (voted on by the attendees after tasting them all).  It's a bring-your-own-glass (or use one of their plastic cups) and taste away kind of deal. Yes, this is a free-pour-your-own event, and you can go back for anything you want.