The second of the seasonals is the Demo I.P.A., part of Magic Hat’s “I.P.A. on Tour” series of season India Pale Ales. This time around, Magic Hat went for a new (and much debated) style: the Black I.P.A. According to the official description, Demo “submits the drinker to a mix of Columbus, Amarillo, and Goldings hops, along with aggressive Goldings dry-hopping.” Dark malts are used to not only give the beer its deep, chocolate brown color, but also impart the bitter roastiness. In reality, this one was a disappointment to me. I love a good Black I.P.A. but the malts overwhelm the hops here in both aroma and flavor. It’s not a bad beer, but nowhere near many of the other black I.P.A.s I have had. The malt character is nice, and this is a good beer, just not a good black I.P.A.  The 6% ABV is barely detectable but the carbonation is spot on.


The final seasonal offering is the Circus Boy Hefeweizen, a "unique and refreshing American-style Hefeweizen" brewed with organic lemongrass. I'll admit up front that I am not a huge fan of the style to begin with nor do I particularly care for lemongrass, but this one is just not good at all. It has a moderately pleasant aroma of lemon, orange and yeast. 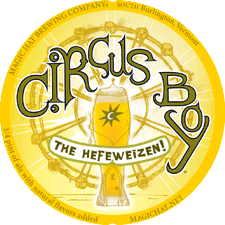 The taste is very yeasty and strong on the lemongrass, very thin on the palate and more sour than refreshing. There are some hints of citrus and light sweet malts throughout.


Overall, I was not as impressed with the Spring selection from Magic Hat as I have been with some of their past seasonal collections. The Vinyl lager was a nice surprise, but the rest were rather forgettable.


There are many Spring seasonal beers on the market now and I encourage you to try them and find the ones you like. And who knows, these Magic Hat brews may be right up your alley.

With Spring nearly upon us comes the next wave of seasonal craft beer offerings that are typically lighter, crisper and more refreshing than their winter counterparts.

The first of the seasonals from Magic Hat is the Vinyl Amber Lager. This is listed as a “deep amber-hued beer

with a sweet malty flavor that creates a satisfyingly smooth experience.” It pours a dark orange-amber color with a nice lingering head and a surprisingly assertive malt aroma. There is some sweetness to it and more than I would expect from a lager. It is moderately malty, and I was impressed with the balance of this beer. I was prepared to dismiss Vinyl as another mediocre lager, but I have to say I really enjoyed it. Coming in at 5.1% ABV, its a bit heavier than other lagers and not exactly refreshing, but the flavor and mouthfeel are very nice. The new label design was created by concert poster artist Jim Pollock, best known for his work with the band Phish.