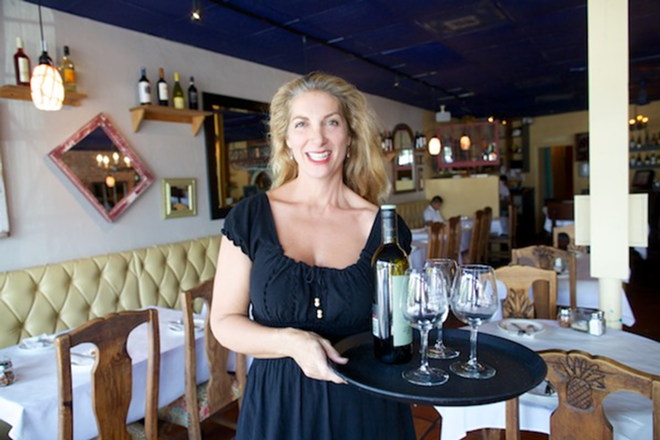 “I always say it took us 21 years to be an overnight success,” says Tina Avila, co-owner of Casa Tina, Pan y Vino, and the soon-to-open Orange Crate Café, all in Dunedin. She and husband Javier opened Casa Tina as a 16-table restaurant more than 20 years ago.

“We were enjoying Casa Tina’s then, but not really pushing it because we didn’t want to be drawn away from our family,” she says. Son Christian and daughter Amanda are now both in college. “Now that our kids are stable, happy, and healthy, we can start to pursue stuff for ourselves and focus on business.”

And focus they have. In the five years I’ve known Tina and Javier, they’ve moved Casa Tina into a former antique store next door and transformed their original space into the wine and wood-fired pizza café Pan y Vino. Next they purchased a former metaphysical shop on Douglas, turning it briefly into the Cabana Café (now occupied by British Delicious). And during our most recent conversation, she informed me that Casa Tina is expanding yet again, and the Avilas are also purchasing the BoxCar Café on the Pinellas Trail at Main. Both the expansion and BoxCar purchase happened within 24 hours.

“I was going away on spring break to Mexico when the girl from the BoxCar offered me the business, and then I heard the guy at the antique store [next to the one the Avilas bought for Casa Tina’s first expansion] was going to sell,” she says. She called Javier, told him they were getting two new businesses, and placed her bids.

“I closed the deal on both places on the tarmac before heading to Mexico,” she says. “I had my hands full already but didn’t want to lose the opportunity.”

So she turned to friend and colleague Bree Cheatham. The two have worked together on Dunedin Harvest, a co-op group that promotes local foodways. Casa Tina has hosted the Light and Lantern Festival over the last three years as a fundraiser for Planting Seeds, a gardening education program. Now she and Cheatham are opening the Orange Crate Café inside the old BoxCar.

“It came up suddenly, but I reached out to Bree about doing business together to promote the local food movement, with a physical location downtown,” she said. “It’s really a perfect partnership.”

Avila says they are “slowly but surely” trying to push their restaurants in a direction that promotes using locally grown foods and providing them at a “cost that is feasible.”

The Orange Crate Café will open with coffee, smoothies, water and soft drinks. By October, they hope to offer healthy and locally sourced to-go lunches, beer and wine.

As for the Casa Tina expansion, it will house a waiting area for customers, a bigger bar, more prep space, and a to-go food area.

“When we expanded Casa Tina’s for the first time, who knew it would go so well?” she says. “With growth, there will be growing pains, like not having enough waiting area for people. It’s really about the comfort of the customer.”

The antique store was a theater in the 1940s, so the Avilas have plans to build a stage in the back in homage to the historic space. They’ll also have live tortilla-making all day (with the tortillas available for purchase). “Won’t be a chore to get take out anymore,” says Tina.

The expansion is slated to begin in September, and should take three to four months.

Editor’s Note: Arielle Stevenson worked as a waitress at Casa Tina from 2008-2009.