The Grand Central District newbie is serving up boutique wines and create-your-own charcuterie. 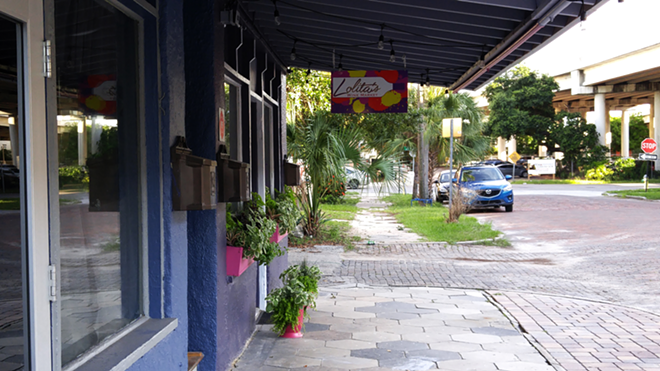 Before Lolita's came about, Kelly and Alex had been planing to relocate from Miami and ended up falling in love with St. Pete. The couple liked the "hipster vibe" of the area, plus the city's support of small businesses, so they decided to rent a space and open up shop near The Hideaway Cafe and Burg Bar & Grill.

But why a wine bar? With a chill atmosphere akin to a coffeehouse rather than a traditional bar, Lolita's is named after their dog, a golden retriever/Louisiana Catahoula mix.

"We have a rescue named Lola. She's not sweet, she's sassy. And when she's bad, we call her Lolita. When she's Lolita, she causes us to want to drink," Kelly told CL. "In order for us to be able to afford good wine, we had to open a wine bar. So, here's to Lolita."

Spearheaded by chef Alex — who lead the Castile culinary team at St. Pete Beach's Hotel Zamora as executive chef for a time and has also cooked for Beach Drive's Annata, among other kitchens, including The Bazaar by José Andrés at SLS South Beach — the food menu is fairly simple, with a focus on sharable items.

On the beverage end, wine lover Kelly curates the vino selection, concentrating on smaller boutique wines and interesting varietals that come from all over. Bottles range from $20 to $40, and any wine is offered by the glass. There's even local beer for those who aren't wine-curious.

While there isn't a dedicated happy hour, other weekly specials are featured. On Wednesdays, patrons can enjoy $5 pours of randomly selected wines, and $15 allows them to sample four to five wines during Thursday tastings.

"We really want to be eclectic, comfortable and fun. We're not looking to be stagnant. We definitely want to keep people interested," according to Kelly, who says their plan is to expand Lolita's — which is just under 1,000 square feet and sits about 28 to 32 people — sometime soon.

When asked what her favorite thing about the neighborhood wine bar is, the co-owner expressed a love for watching strangers get to know each other over a glass.

"The sense of community. The people really have been responsive to our theme. It's very communal in nature, we have couches," she said. "People who didn't know each other interact. Seeing those people meet new people, it's a really fun process."