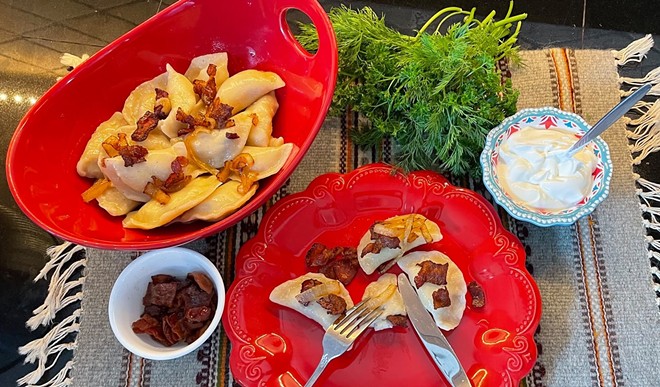 Pierogi Bar - Tampa Bay / Facebook
Adorned with blue and yellow balloons near the entrance, a self-described “first and best Ukrainian restaurant in St. Petersburg” is now open at 6661 Central Ave.

There are many types of fillings for its pierogis, ranging from savory options like the traditional potato and cheese to sauerkraut and mushrooms. Other dishes on the newly-opened restaurant’s menu include fried potato pancakes, the traditional beet-based soup borscht and its exclusive Kozak platter, complete with two kobasa sausages ( the Ukrainian version of kielbasa), three potato pancakes and three pierogis of your choice. Add-ons include caramelized onions, bacon and sour cream.

For dessert you can order tart pierogies filled with dark morello and Montmorency cherries topped with butter and sugar, or ones stuffed with sweet cottage cheese.

Although the options for pierogies seem rather extensive, a representative of the restaurant tells Creative Loafing Tampa Bay that an even larger menu is still in the works.

Pierogi Bar owner Daryna Voloshyn was making and selling her prized pierogis out of her home, cottage kitchen-style, until the recent acquisition of the Central Avenue restaurant. The space was previously occupied by O’Bistro, a Mediterranean-American eatery that closed earlier this month when Voloshyn officially took over— although she is still working on getting the Pierogi Bar sign up.

Before the recently-acquired brick and mortar, her customers placed bulk orders via phone and either picked  them up at her house or got their pierogies delivered.

Back in March, Voloshyn started a fundraiser to help raise money for her debut brick-and-mortar.

"This project will be our flagship restaurant with an opportunity to replicate in more regions to showcase the true regional diversity we have with our historical and cultural Ukrainian foods,” the GoFundMe reads. “Once opened, Pierogi Bar will dedicate a part of its revenue to help those who suffered from war in Ukraine.”

The restaurant is still in its soft opening period as it transitions into full service, but guests can eventually expect a more extensive menu, outdoor seating, and a return of its delivery services.

Keep up with the latest information on St. Pete’s newest Ukrainian restaurant by following its Facebook at @pierogiebar.

Pierogi Bar in west St. Pete is now open from 11 a.m.-9 p.m. Tuesday-Sunday, and is closed on Mondays.