A few of its beloved sweet treats will be available, too. 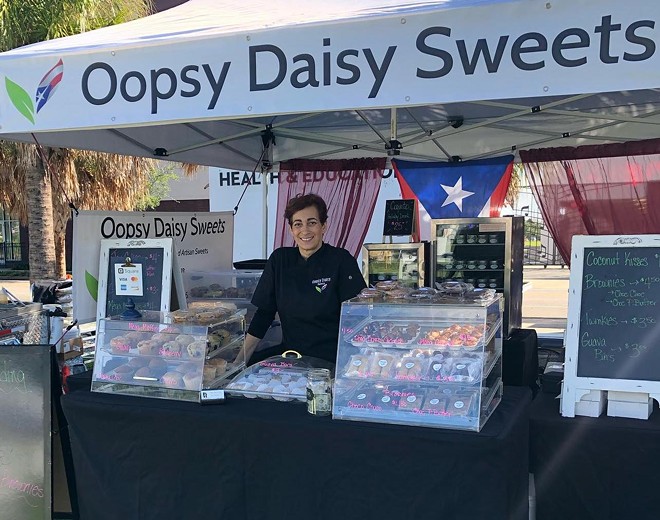 The base of each dish will consist of rice, beans and sweet plantains, as guests can choose mojo-marinated jackfruit, vegan garlic chicken or picadillo as their protein. Oopsy Daisy's picadillo, a dish that typically contains ground beef, will be made with texturized vegan protein (TVP), olives and potatoes in a tomato-based sauce.
Sweet treats on the upcoming pop-up's menu include tres leches cakes, panetela aka guava cakes, and besito de coco, which are Puerto Rican coconut macarons. Entrees will range from $13-$15, while desserts will cost $3-$5 each.


"As a person with food allergies, it became difficult to enjoy baked goods and the ones I did find were not too appealing, so Oopsy Daisy Sweets was born," owner Daisy Sutherland writes on her website. "We first began offering sweets from my Latin background and later expanded into more infamous childhood sweets but with a twist."

A few of Sutherland's most popular treats—besides the vegan twinkie aka "vinkie" that helped put her on the map—include cookie cream pies, mini jar cakes, muffins, brownies and biscottis.

The Oopsy Daisy name might sound familiar, as its wholesale vegan treats can be found in a variety of different businesses throughout Tampa Bay, like at both locations of Black Radish Grocer, Grassroots Kava House, Vegan International Co. and Duckweed Urban Grocery.

For more information on Oopsy Daisy Sweets' upcoming pop-up and its seasonal rotation of vegan desserts, follow its Instagram at @oopsydaisysweets.