The menu focuses on approachable but elevated fare—and scores at almost every turn. It’s the weekend—after dark—and from the street Barterhouse Ybor looks dormant. It turns out, that’s by design. The grand space has a rustic speakeasy vibe with floor-to-ceiling tinted windows on two sides. It’s dominated by a massive welded bar that bisects the room with a seemingly limitless array of uplit bottles mirrored by two tiers stacked just under the tall beamed ceiling.

In the back, there’s a butcher block counter, for a few walk-ins, that overlooks executive chef Justin Sells’ open kitchen. Lurking over by the dining room side of the space, chef’s knife-in-hand, is Ken Emery. He’s the partner with a long restaurant resume, who’s decked out in cap and apron. 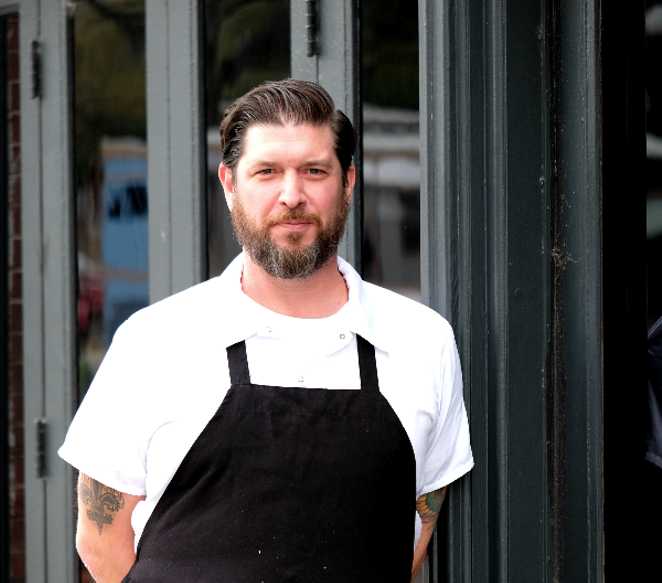 Barterhouse lives by the “radical difference” in ingredients provided by personal relationships with fishermen, farmers, and ranchers, whose names are written in chalk in the corner by the kitchen. Black proudly announces that there’s no freezer, “everything is fresh.” The seasonal menu focuses on approachable but elevated fare.

The Snake River Farms American wagyu beef is highly marbled several steps above prime. Emery spends his evening turning the trimmings of the pricey beef and bits of octopus into two splendid off menu amuse bouche platters, which he hand carries to each table as a welcoming ambassador. The tartare sits on a small papadum-type cracker topped only with salt, pepper, and a dot of fermented garlic. This is paired with bruschetta showing notable acidity supporting a sliver of octopus and fresh basil. It’s a delightful way to begin and gives Emery a chance to take the pulse of each group of diners. 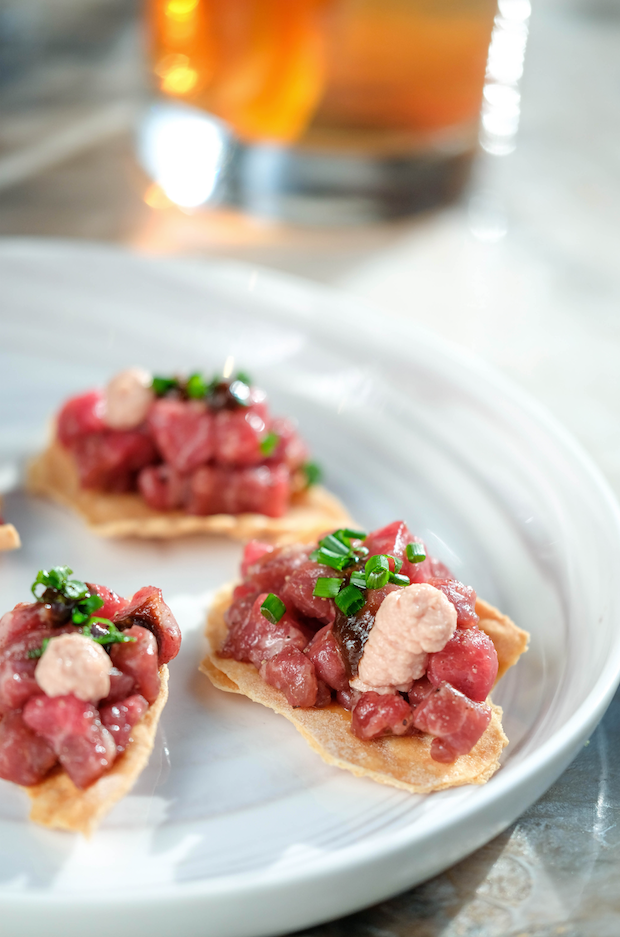 Melissa Santell
The tartare amuse bouche sits on a small papadum-type cracker topped only with salt, pepper, and a dot of fermented garlic.

“Two pigs on a date” stuffs a quartet of sweet dates with spicy ground chorizo and then wraps them in bacon, which is cooked ‘til it’s dark brown and crispy. The result is delicious three-bite nuggets which are surprisingly soft, not overly spicy and have a lovely, sweet glaze.

The melted Alpine cow’s milk cheese, raclette, is heated in a small fry pan and poured tableside over (too many) small fingerling potatoes served beside sliced prosciutto, a pile of arugula with a few tiny cornichon and a malt-pickled pearl onion. It’s a flavorful spin on a traditional Swiss dish, but eight potatoes gives it all an awkward feel. I can’t help thinking less is more; I want the cheese to be the star. Melissa Santell
“Two pigs on a date” stuffs a quartet of sweet dates with spicy ground chorizo and then wraps them in bacon, which is cooked ‘til it’s dark brown and crispy.

The entrées, however, are sensational. The $69 super wagyu New York strip is beyond the budget, but the tamarind lacquered pork shank is a show stopper. There’s a nod to pulled pork with crisp, kohlrabi slaw dotted with cucumbers and red onion. The tender shank sits upright with bones poking skyward like the kanzashi sticks that hold a geisha’s hair. The super shiny glaze is garnished by tiny bits of chive and roasted peanuts.

The spiced rum pudding with toffee and gingersnap is so popular that they’re out. We reluctantly settle on crème brûlée with low expectations. Surprisingly, the sugar crust is perfect and the soft custard below bursts with punchy bourbon for a surprising twist on a ubiquitous dessert that really surprises.

With a nod to its Ybor roots, each check is presented in a decorative cigar box. Like the food and drink that have come before, it evokes a welcome smile.

CL Food Critic Jon Palmer Claridge is the Bay area’s longest running food critic and dines anonymously when reviewing. See his list of Tampa Bay’s 50 best restaurants of 2019, check out the explanation of his rating system and read his new book, 'Drink.More.Wine!' 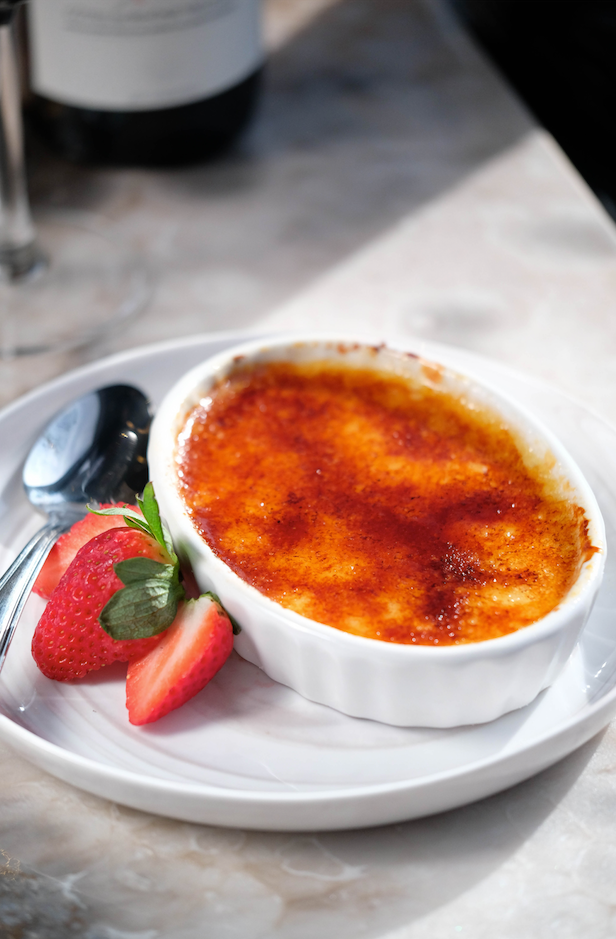 Melissa Santell
The crème brûlée's sugar crust is perfect, and the soft custard below bursts with punchy bourbon for a surprising twist on a ubiquitous dessert that really surprises.