Part of the "Dig In" campaign to support Black-owned businesses. 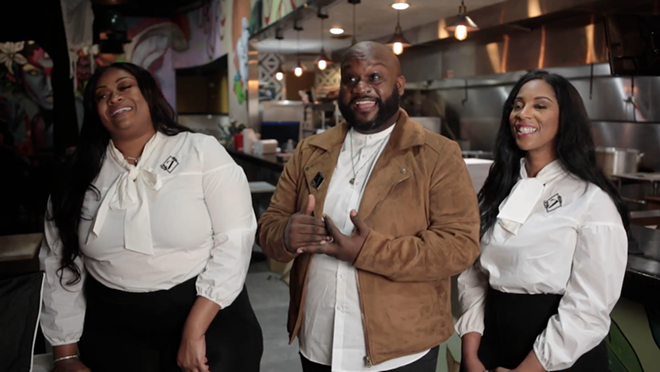 Since making its debut at 1930 E. 7th Ave. in Ybor City, 7th + Grove has been busy growing a following, racking up Best of the Bay awards, and expanding with a forthcoming second location at Sparkman Wharf. But that's not all. The Black-owned restaurant was recently featured in Pepsi’s national ad spot, “Savor the Sound."

7th + Grove was featured alongside three other Black-owned restaurants from Houston, Dallas and Washington D.C.. The Savour the Sound campaign hopes to capture the emotion, energy and spirit of each restaurant's dishes and invite people to “Dig In” alongside Pepsi to keep them thriving. The segment followed the making of 7th + Grove's Good As Hell burger from the kitchen to table followed by an interview with restaurant owners, Dr. Vondalyn Crawford, Dr. Jamaris Glenn, and Khalilaa McDuffie.

Dr. Jamaris Glenn shared that he has always felt that music and food was the best marriage, which led to the creation of a menu favorite, the Good As Hell burger, inspired by Lizzo's hit song "Good as Hell." To give you a taste, the burger is made up of two Angus beef patties, American and Swiss cheese, fried onion rings, fried egg, bacon, hot pickles, and shredded braised collards, served with garlic farm fries.

Dr. Crawford echoed the hardship for the restaurant industry through shutdowns and regulations, while McDuffie explained how with help from the community, 7th + Grove was able to reopen stronger than before.

If 2020 taught us anything, it was that we need to rally together as a community in order to survive the rough patches. Now that we're hopefully toward the tail end of the pandemic with vaccine rollouts, let's continue to safely build back up our beloved food scene.

🍽️ Ready to dine for a good cause? 🍽️ We are proud to announce Pepsi Dig In – a platform that supports black-owned restaurants by providing training, business growth opportunities, and raising visibility for the industry. Stay tuned for more information. pic.twitter.com/axzxDXkpNB


Support local journalism in these crazy days. Our small but mighty team is working tirelessly to bring you up to the minute news on how Coronavirus is affecting Tampa and surrounding areas. Please consider making a one time or monthly donation to help support our staff. Every little bit helps.