It’s not the first time the bar has come under fire. 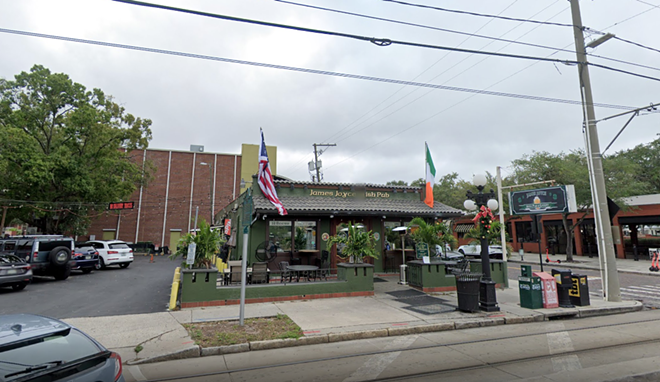 While some restaurant owners are stepping down after getting called out for violent comments, one Ybor City bar owner is figuratively saying, ‘Hold my Guinness.’

On Friday, June 5, Noah Wilbur went on social media to say that “owners and staff at the James Joyce Irish Pub were wielding paintball guns, firing blanks and antagonizing a comrade and I when we were trying to gather protesters to regroup.”

Nearby business owner Tom DeGeorge confirmed that after backlash over Wilbur’s posts, James Joyce—which was already boarded up— now has messages of support for Black Lives Matter on the boards. James Joyce is also home to Ry Guy’s Chicken and Waffles.

The kicker is in the “response from the owner” posted five hours later, which said:

“Yep. paintball guns fired by patriots… and we heckled your sad protest. At no time did we threaten you. A lil rain and you ran for cover in an epic act of cowardice. The best part? You were terrified in person and had nothing to say. Maybe you are angry you have the body of an 8th grade girl and are an impotent half-a-man?”

Nick Wilbur’s review and the response from the owner have since been deleted.

Creative Loafing Tampa Bay emailed James Joyce and Ry Guy’s co-owner Janice Goh, plus called and left a text message for the other co-owner, Ryan Gougeon. We’ll update this post if they respond.

Hours before Wilbur posted on Facebook, James Joyce sent a promotional text to subscribers saying “We r open! An epic d-tuck by the c.ommies! cone out and support our staff! SHOW THIS TEXT and get a free pint of Guinness! SHOWCODE:DTUCKLISERSSCAREDOFSOMERAIN.”

As media consultant and former Deadspin editor Timothy Burke pointed out, Gougeon might want to research the politics of the socialist artist his bar is named after.

The owner of James Joyce pub in Tampa sent this message out to patrons after being accused of harassing Black Lives Matter marchers with paintball guns. Perhaps someone should inform him of what James Joyce's politics were. pic.twitter.com/wdLzgvjccd

In an interview with tampafp.com, Gougeon said he was offended by any allegations of racism because he’s married to Goh, who is Malaysian. To be clear, proximity to people of color does not exclude you from possibly being racist.

He added that “someone is targeting us” while saying that he and staff members were having “fun” playing with a paintball gun he keeps in the back of his truck. He also admitted to drinking heavily when firing paintball rounds at empty kegs on the pub’s property.

Gougeon blamed the promotional text and his response to the since deleted Google review on anger and some “demon rum” that he was drinking.

“I was furious. I saw we were being attacked online. I said it. I regret saying it. I think it was something that was uncalled for and I feel bad about it,” he told TFP, “but after being attacked for two straight months for not voting the way some people want me to vote, it builds up and, I guess, it boils over.”

Gougeon’s comments regarding voting might be alluding to an April RyGuy’s Chicken and Waffles’ Facebook post alluding to how the store would not be serving chicken and waffles until a statewide stay-at-home order is lifted.

"I guess saving a few old geezers is worth taking the world economy and encouraging civil unrest and violence,” the post said.”Want a real crisis? Starve 500,000 hospitality workers in florida for a month and see what happens.”

The RyGuy’s post linked to an article headlined “Pandemic-Related Unemployment and Shutdowns Are a Recipe for Social Unrest,” from Libertarian website reason.com. On Monday, March 30, RyGuy’s co-owner Janice Goh told CL that she was “still trying to figure out what happened” with the Facebook post.

“I didn’t post that. I did [speak] with my partner and learned that he made that post out of frustration as a small business owner,” Goh wrote. “The James Joyce is still in business and is offering take out and we still keep our staff employed. I’ve also just learned that we now are able to apply for the paycheck protection program so all of our 25 employees will get paid and keep their employment.”

On Monday, June 8, CL called the Ybor City Chamber of Commerce; a rep said the Chamber’s executive director would call us back.