97x Backyard BBQ with Sick Puppies, Hymn for Her, and more

A full rundown of this week's best concerts. 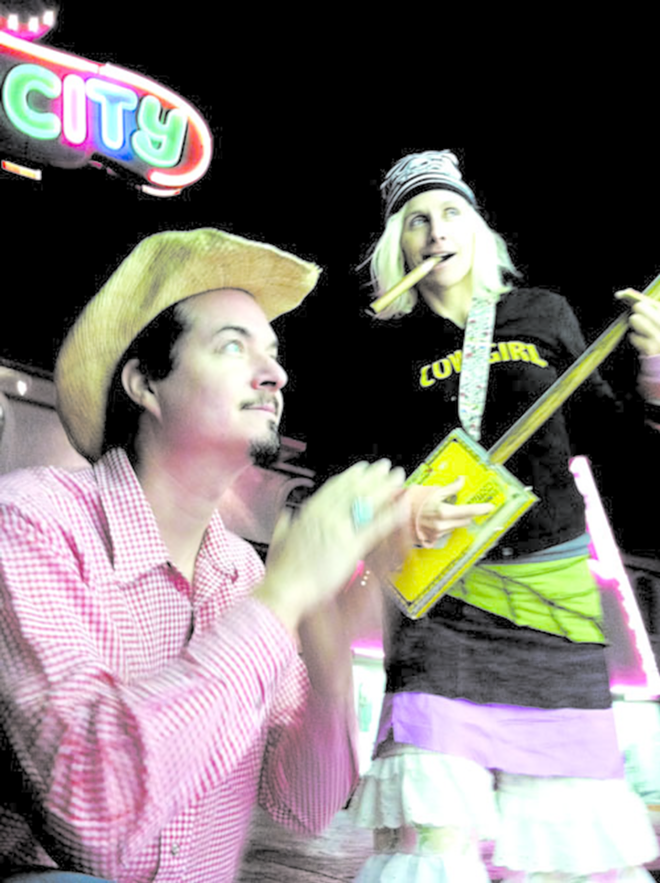 Silver Poppop
Hymn for Her

HED PE / Mushroomhead w/Better Left Unsaid One has a penchant for face paint and produces hip-hop and heavy metal-fused hardcore punk with vocals that range from melodic singing to rapping to death growls. The other perform in full-on freaky gore-tastic masks, costumes and face and body makeup, and offers up electro-industrial alt-metal marked by pained wails and heavy roars. The two hit town as part of their co-headlining "Hed to Head tour." (State Theatre, St. Petersburg)

Manic Expression w/The White Kids/Black Ice Landon Morgan (vocals, 6- and 12-string guitars) and Manny Franco (vocals, keys, percs) are the sweetly-harmonizing musicians who make up Tampa's Manic Expression. Cheeky indie hip hop/acoustic reggae rock duo The White Kids (Vinny Edwards and Sammy Mull) slow-rhyme about smoking pot, getting it on, getting tore up (I'm mixin' this, with a little bit of that / a few more shots, I'm on my back ..."), and hanging out waterside, sand between toes. Acoustic rock four-piece Black Ice rounds out the bill. (Crowbar, Ybor City)

James Taylor On his last run of dates in Florida, James Taylor came with Carole King on their shared "Troubadour Reunion Tour." It was one of the most successful tours of 2010, with several arena stops (Tampa included), upward of 700,000 tickets sold, and more than $59 million divvied up between the two artists at the end. This time around, the folk songwriter with the soothing downy vocals rolls into the Sunshine State solo for a single performance at a more intimate (2,518-seat) theater. (Bob Carr Performing Arts Center, Orlando)

Seven Mary Three I caught Seven Mary Three back in the summer of '98, age 18, freshly graduated; rocked out to their hard post-grungy sound, sung along to the hits I knew from my earlier teen years, 1995's "Cumbersome" and "Water's Edge"; and had an overall good time when I wasn't expecting one (I'd come to see Black Crowes). Their last album, 2010's live acoustic Backbooth, was recorded in Orlando in 2009 at a private show for their most loyal fans. This show is presented as part of Hard Rock International's 40th anniversary celebration. (Hard Rock Cafe, Tampa)

Hymn for Her Hymn for Her has taken the "home studio" concept to a new level. They live, record and tour the U.S. in their 16-foot, 1961 Bambi Airstream. Like a grittier folk version of the Partridge Family, Hymn for Her (Wayne Waxing and Lucy Tight) are accompanied by their 4-year-old daughter and black lab. The music of Waxing (vocals, acoustic guitar, banjo, harp, percussion) and Tight (vocals, cigar box guitar) is stripped-down Americana with low-fi subtleties, their lyrics reflecting on life on the road. Those honest words set against stomping rhythms, jangling strings and harmonica make perfect traveling music. The duo also stops at Hideaway Café in St. Pete on Saturday. (The Independent, Tampa) —Adam Richards

Bone Thugs-N-Harmony Bone Thugs-N-Harmony was forever sealed as a major innovator of hip-hop with singles like "1st of tha Month" and "Tha Crossroads." With their trademark style of rolling, harmonized rhyming, they reached the top of the Billboard Hot 100 and Hot Rap Tracks charts in 1995. Now with at least 50 million albums sold, a few member departures (and returns), and many respects paid to Easy E, Bone Thugs return to the road to promote their 2010 album, Uni5: The World's Enemy, released on their new label, The Life Entertainment. This tour, the group holds open-age talent searches at each venue seeking any raw, un-signed talent to add to their label. (Jannus Live, St. Petersburg) —Adam Richards

Jimmy Thackery & The Drivers w/Jimmy Griswold Band Schooled by the great Muddy Waters himself, modern electric roots-blues guitarist/singer Jimmy Thackery went on to play with the Nighthawks for 15 years before parting ways with the band in 1986. Today, 18 recordings deep into his solo career (which includes a new LP, 2011's Feel the Heat), Thackery is considered a powerhouse who still keeps to the road and performs hundreds of shows with his trio, The Drivers, every year. (Skipper's Smokehouse, Tampa)