A 'Punisher' walking tour through Oaklawn, Showmen's Rest and the Cuban Club. 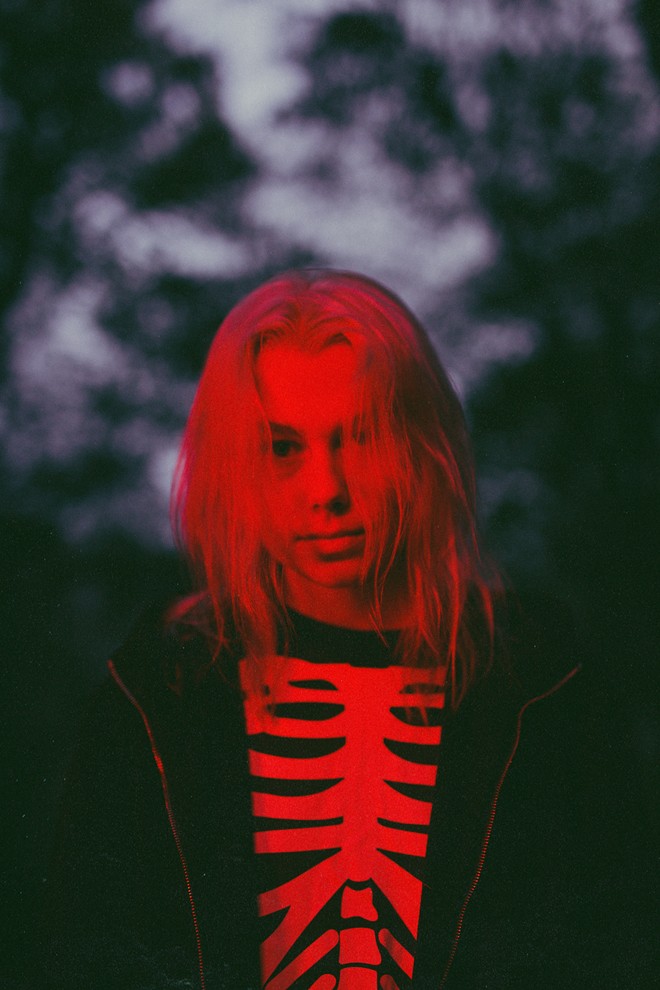 Photo by Olof Grind
Phoebe Bridgers
Tender and sprinkled with death, Phoebe Bridgers' output features seemingly gloomy tracks about the impact of love, plus wise meditations on growing up, alcoholism and atheism all driven by an undeniable undercurrent of joy.

The public has found a lot of that joy and also grown fond of the 27-year-old's habit of adorning garments with skeletons on them, be they Thom Browne suits or Lifer dresses. Her band's onstage uniform at Coachella was skeletons, and fans can expect to see those bones again when the Grammy-nominee heads to Ybor City for a show that sold-out pretty much the minute the 4,000 tickets went on sale. 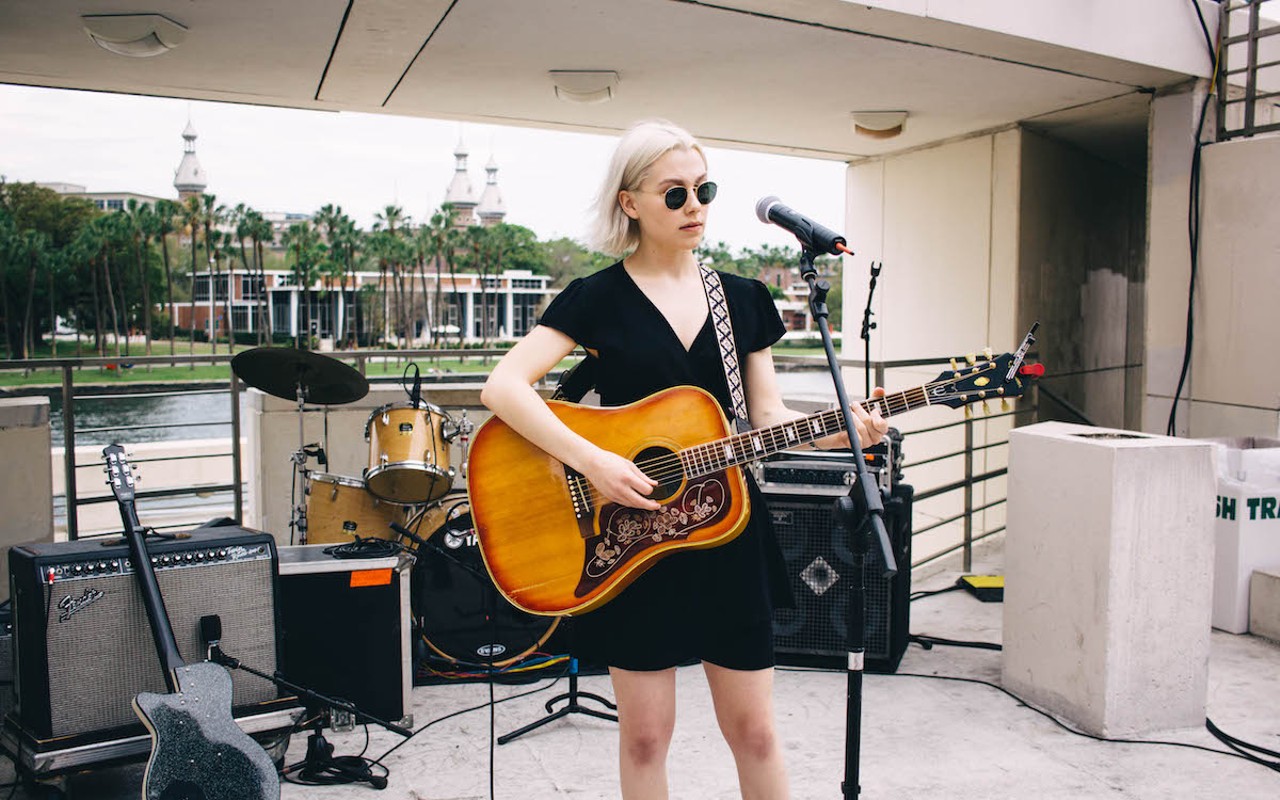 The gig—in support of Punisher, her fourth release and second solo outing—is big jump from her 2017 Bay area debut at Gasparilla Music Festival where she played for less than 200 folks in the Kiley Garden Amphitheatre.

Bridgers, boss at Saddest Factory Records founded last fall, spends countless hours on a tour bus but tries to maintain some semblance of a routine. In 2020, she told Rolling Stone about her fondness for walking. Well, Tampa has some skeletons of its own (we're not talking about City Hall), and you'll have to hoof it to find them.

To welcome Bridgers into our haunted city and complement her deep explorations into the human psyche—and, of course, her cute little ghost mascot—Creative Loafing Tampa Bay tapped into Punisher lyrics for an on-foot tour of haunted places in Ybor City, Tampa Heights and downtown.

Find a mobile ready for this walking tour via Google Maps.

Oaklawn—founded in 1850 as a public cemetery and located at 606 E Harrison St. in downtown Tampa—serves as the final resting place for James Cooley Field. To get there from the Cuban Club, you'll walk by José Martí Park and the Sociedad La Union Marti Maceo (a club built for Black Cubans forced into segregation), by the demolished Tampa Park apartments and through The Scrub, one of Tampa's historic Black neighborhoods all but obliterated in the name of "urban renewal" (at least the St. James Episcopal Church is being restored).
Scott Street (!!) will take you to Oaklawn. Field, who's buried in section five, was a commercial photographer known for capturing cityscapes in Tampa during the 1890s; the lyrics to "Moon Song" compare quite literally to his experience. At its core, the tune delves into a one-sided romantic relationship; Bridgers strives to do the utmost for a partner who pays very little attention to the effort, crooning, "you might be dying, but you're holding me like water in your hands."

Fields uprooted his life to move to Tampa because his wife had become ill with tuberculosis, a disease that would kill her and their daughter. In a way, he tried to give his wife the moon while she was dying, but shortly after their relocation, she passed. Cooley's inability to cope led him to sell the photography company and buy a pub; he peddled liquor until he was arrested for selling alcohol illegally.

Showmen's Rest—2.3 miles from Oaklawn—is a small subsection of Tampa Heights' Woodlawn cemetery located at 3412 N Ola Ave. where circus performers and carnival workers rest. Grady Stiles III, better known as Lobster Boy, is there. To get to him from Oaklawn, walk through Tampa Heights (with the option detour and to visit one of the neighborhood's oldest churches, which is now a cigar bar, or by the old pump house turned restaurant at Water Works Park) to Woodlawn, where several prominent Tampeños are buried.

In the '30s and '40s, traveling circuses entertained thousands upon thousands. The modern circus is slightly evolved, focusing less on gawk-material and more on talent, but back then, circuses were largely made up of those who had bodily abnormalities. Born with ectrodactyly, the condition caused the bones in Stiles' hands and feet to fuse together, giving him his Lobster Boy nickname.
In Bridgers' "Punisher," an ode dedicated to arguably her most inspiring musical influence, Elliott Smith, she sings, "What if I told you that I feel like I know you, but we never met." Although Bridgers never met Smith, her music bears the same brooding DNA and metaphorical flourishes.

Lobster Boy was and still is an American sensation. Even though he was murdered in 1992, he is a mainstay in modern media, including the 2014 series "American Horror Story: Freak Show" which based its character Jimmy Darling off Stiles' story. The cult classic normalized his appearance.

"Hear so many stories of you at the bar, most times alone but some of them looking your worst," Phoebe sings on "Punisher." While Lobster Boy grew up a revered and lonely circus act, he soon married then turned to alcohol.

Bridgers lovingly explains how Smith was always sweet to the "trust funds" and "punishers," fans who are well-off and talkative, respectively. Lobster Boy, on the other hand, was not so nice and was pretty much just at his worst at the end; he regularly beat and abused his wife and kids and even murdered his daughter's fiance.

The ideal place to end up is 2010 N Avenida Republica de Cuba. Although it's not a cemetery, the Cuban Club is haunted with ghosts and supernatural spirits—perfect for Bridgers' aesthetic. To get back there, head east, past Robles Park (maybe get a coffee at King State or Black Radish?) and through Ybor City.

"I grew up here til it all went up in flames, except the notches on the door frame," she sings in "Garden Song," the opening salvo on Punisher. While Phoebe describes her journey growing up and watching her house burn down, but not losing the growth accompanied with it, the lyrics closely compare to the club's history. The first Cuban Club was called "El Circulo Cubano" ("Circle of Cubans") and served as a community space for immigrants from the Caribbean nation. The wooden clubhouse burned down in 1916; workers rebuilt the building with bricks a year later and renamed it, acknowledging the past.

Garden Song continues with, "Everything is growing in our garden, you don't have to know that it's haunted." And when you come to a concert, you, too, may not know that there are four ghosts who primarily haunt the property, according to Paul Guzzo who tried—and failed—to spend a night at the Cuban Club last year.

There's an actor who, back to the '20s, forgot his lines and proceeded to kill himself onstage, a board member who was shot in the face and "a woman in a white gown and red shoes who was pushed from a balcony onto the road when she refused to dance with a man." One of the most genial hauntings at the club is Little Jimmy, who was eight or nine when he went for a swim in the Cuban Club pool without a lifeguard, drowned and died. The pool became the ground floor cantina, but locals and visitors claim to notice Little Jimmy's presence through flashlight flickers; spectators sometimes spot him in pictures.
On "Savior Complex" Bridgers says, "All the skeletons you hide, show me yours." While the song inherently focuses on one person's strong-willed desire to save another, this song parallels Jimmy's story in a more light-hearted fashion. Perhaps Jimmy makes his presence known at the theater because he did not have much support when he was alive. He did go for a swim alone after all. Since Jimmy still communicates with the living, perhaps we are his savior complex, and maybe he'll be at the show, too.