The station is pulling the plug on Halloween. 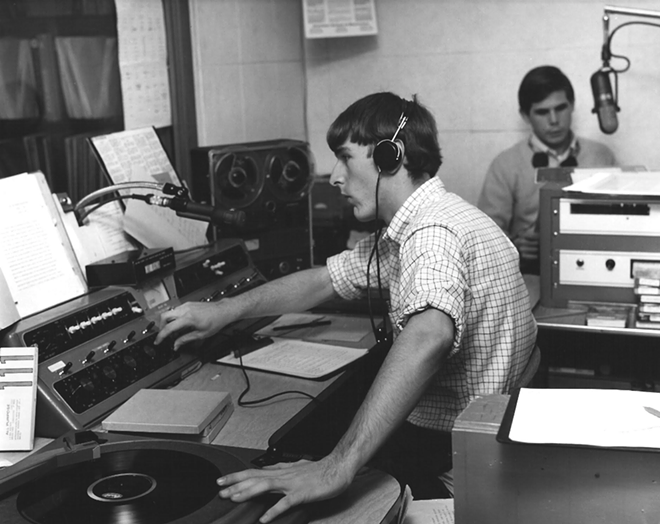 Courtesy of Michael Scott
George Geiger was the first DJ to play jazz on WUSF back in 1966
A 56-year-old staple of the Tampa music scene heads to the grave on Halloween night when WUSF 89.7-FM pulls the plug on “All Night Jazz.”

“Those programs include 1A Plus, As It Happens and the second hour of Science Friday,” she added. “The changes mean WUSF 89.7 will become entirely focused on news and information, including weather and safety, so we can better serve the residents of Florida.”

In March, the overnight programming’s time on air was cut down from eight hours (9 p.m.-5 a.m.) to just three (9 p.m.-midnight). At the time, Urofsky told staffers and the jazz community that the change was partially to make room for more BBC World Service news about the war in Ukraine.

Urofsky told CL that WUSF Jazz—which already has its own website and social media accounts—is moving to the station’s Arts Axis Florida hub.

“...jazz will expand tremendously and we can add music, videos, podcasts and live jazz events and performances, allowing WUSF to reach more jazz audiences when and where they are; online, mobile, on social and beyond; all 24/7,” she added.

But all those things already exist at wusfjazz.org. What's more is that Arts Axis’ Facebook page only has 245 people following it, compared to the 1,277 following on All Night Jazz’s Facebook account.

Urofsky has yet to respond to follow up questions regarding the specific reasoning for taking programming—which regularly highlighted local jazz artists and the biggest jazz shows happening in town—off the air. We'll update this post when she does.

“I'm not quite sure how they think they're going to be increasing coverage of bands or the content of jazz on the station by pulling it off the air,” Mike Cornette told CL.

Cornette, who retired last December, was the last person to hold WUSF’s Jazz Director position. He called the decision “a sad affront to jazz fans” in the Tampa Bay area who’ve turned to “All Night Jazz” to not only be a companion for lonely nights, but the go-to source for information about the local jazz scene.

A job description for WUSF’s new Arts Axis Florida Brand Manager position features a lot of the same responsibilities Cornette had, but it’s still unclear how that person will recreate the connection between jazz fans and the “All Night Jazz” programmers.

“‘All Things Considered’ didn’t even start until 1971,” Cornette added, alluding to motivation to replace 56 years of jazz with NPR news. “It's a shame that they're ignoring the audience that they've built up because they don't feel like having it on the air.”

“All Night Jazz” DJ Steve Splane, who came out of retirement to help Cornette with programming, told CL that during a meeting last Friday, and in today's note to the entire staff, he and other contributors were not thanked when station leaders told him and other jazz programmers about plans to move their shows to Arts Axis.

“More importantly, those of the generations of jazz hosts that came before us were not acknowledged or respected,” Splane said.

Splane’s already taped some of his next on-air shift, but told CL that he’s thinking about re-doing it to pay homage to George Geiger, who was the first DJ to play jazz on WUSF back in 1966.

Splane dolefully told a story about a Seminole-based saxophonist, Trace Zacur, who’s a 2020 graduate of Berklee College Of Music. Zacur recently told Bob Seymour (the last WUSF jazz director before Cornette) that he idolized him, and that he grew up on the station.

“There's hundreds more like Zacur, hundreds of kids like him in the Bay area over the years,” Splane said.