Luis Viera says, 'Few artists better challenge us to live up to our American creed in song.' 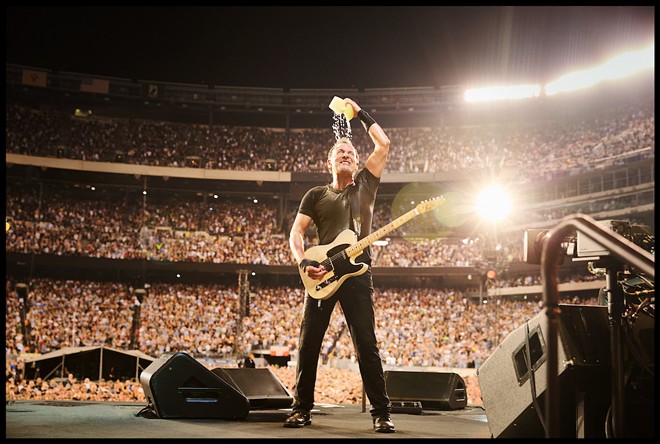 Photo by Danny Clinch
Bruce Springsteen kicks off his new U.S. tour in Tampa, Florida on Feb. 1, 2023.
On Feb. 1, Tampa will be the first American City to welcome Bruce Springsteen and his E Street Band on its 2023 American tour—a big deal for the city, which will see outlets like Rolling Stone pop into town to cover the kickoff.

For non-Springsteen fans, the question is often asked: What is the big deal with The Boss?

I am an unapologetic and passionate Springsteen fan for many reasons. But none greater than the Jersey native’s role as our unifying American storyteller. Not the storyteller of “Red America” or “Blue America” but our United States. All of it.
And he tells the tale of so many narratives of our America. Taken together, they unify our experiences outside of many of our identities and they tell one hell of an American story.
Fact: Nobody sings on veterans like Springsteen.

While numerous Springsteen songs deal with vets, there is a special place for the Vietnam soldier who grew up in Buddy Holly’s idealized America and came home post-war to Janis Joplin’s fractured America. Vietnam Veterans of America Co-Founder Bobby Muller said it best on Springsteen’s advocacy: “[If] it wasn’t for Bruce coming forward, there would not have been a coherent national movement on behalf of Vietnam vets.” And the songs reflect this passion. “Born in the USA” is his most overplayed and yet most under-appreciated song: It describes a Vietnam veteran’s tough road to war and even tougher return home. “The Wall,” “Shut Out the Light,” “Lost in the Flood” and “Brothers Under the Bridge” tell unique Vietnam veteran tales. Springsteen reminds us that these heroes—the greatest of their generation—still need to feel welcomed home.

Fact: No popular artist responded to the tragedy of our time, September 11th, like Springsteen.

His album The Rising is the finest artistic response to 9/11. It stands the test of time through mourning and resolve. “Into the Fire” poignantly tells of first responders racing “up the stairs, into the fire” to save lives and die. “Nothing Man” tells of a post-September 11th first responder numb from service-related trauma and dodging community labels of heroism. “You’re Missing” speaks of sorrow from that day. This proud father of a Jersey City firefighter showed a lyrical commitment to first responders on our darkest day.
Fact: Nobody does American workers like Springsteen.

Songs like “Youngstown,” “Badlands, “The River,” “Death to My Hometown” and “Factory” express the dignity a good society should give for one’s labor. They tell of workers left behind in a new economy: International trade, runaway corporate profits and disregard for families workers represent on the job all form a new insecure world for workers in Springsteen’s America.

Fact: Nobody does the outcasts and underdogs who defiantly stand up when others command them to sit down like Springsteen.

His “Streets of Philadelphia” was an early song to explore the isolated plight of HIV-AIDS victims. “Ghost of Tom Joad” reminded prosperous Clinton-era America of immigrants, farm workers and those who call the outside concrete home. The topics tackled are many: “American Skin (41 Shots)” tackled racial injustice; “Johnny 99” speaks to a social pipeline to prison; “American Land” speaks of early 20th century American immigrants expecting “diamonds in the sidewalk”; “Galveston Bay” speaks of Vietnamese refugees; and history’s lynched and intentionally hidden voices speak in “We Are Alive.” Springsteen writes that good Americans “take care of our own”—a populist slogan used thoughtfully to back fellow Americans stranded in the too many Katrinas and Badlands of our affluent land.

And last fact: Nobody does life’s unique stages like Springsteen.

Songs like “Night,” “Rosalita,” “Thunder Road, “Fade Away” and “Drive All Night” reflect sorrow, relentless ambition and just being out on a midnight run. "Tunnel of Love” as an album is a personal journey through divorce. Many songs, such as “Jesus was an Only Son,” show a lapsed Irish-Italian Catholic connecting to his faith through aspiration and nostalgia. And songs like “Walk Like a Man,” “Long Time Coming,” “Independence Day” and “My Father’s House” reflect on a constant Springsteen theme: fathers and sons. Speaking as a 45-year-old-guy, I can tell you that many of these songs have carried the day for me.
Few artists better challenge us to live up to our American creed in song like Springsteen.

Many songs do this, but none better than “Long Walk Home,” which reflects: “You know that flag flying over the courthouse, means certain things are set in stone: Who we are, what we’ll do and what we won’t.”

In the end, Springsteen’s songs are our America: our best and worst moments, with a reminder that our best moments serve as a guide to overcome our worst injustices and tragedies. It is part of our American journey. These are our ties that bind us—all of us.
So I, as a humble public servant and not so humble Springsteen fan, declare to Mr. Springsteen and his E Street Band: Welcome to our beautiful City of Tampa!

Luis Viera is the Tampa City Councilman for District 7, where he just won his third term.

Luis Viera is the Tampa City Councilman for District 7, where he just won his third term.
Scroll to read more Music News articles