It's been five years between albums, but all is more than well. 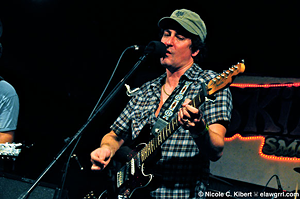 Nicole Kibert/elawgrrl.com
Ted Lukas, whose new album is streaming below.

Ted Lukas obviously has a great record collection… but don’t let the local musician just talk to you about it.

Instead, listen to his fresh new solo release, King of Reverse, and get a feel for the depths of the music from which this insanely talented singer and player draws his inspiration. One listen to the opening, crunchy pop strains of the Replacements-drenched album opener, “Speak Less, Say More” indicates that Lukas has created something special here with his long awaited third solo album.

A veteran of the local scene and a key figure in Tampa Bay area bands Barely Pink, Hangtown and The Misled, it’s been five years since Ted Lukas has released and new music but this sparkling new work was certainly worth the wait. Dipping into a variety of styles and sounds, Lukas’s reach extends from roots rock to Americana, supercharged blues-rock and everywhere in between. Ted’s impeccable guitar playing is vibrant throughout and, vocally, he’s versatile enough to let loose some gritty swagger and snarl on rocker “Fearless Man” as effortlessly as he lets his laid-back croon sail smoothly on the reggae-inspired “Raise Your Spirits.”

Fellow local musicians and collaborators Ricky Wilcox and Brian Merrill jump in to assist Ted with the creation of this fine new disc that gets better with each repeated listen.

“I’m doing the best I can,” Lukas belts on one of the album’s many fine cuts. And he makes it painstakingly obvious throughout the album that he’s doing just that… and more. Here’s hoping Lukas doesn’t take as long to create the follow-up for King of Reverse, one of the very best and most inspired releases to emerge from our vast and thriving local music scene this year.

Listen to the album below, and call your local record store to see if its carrying the release.