A Broadway-style Beatles tribute show, Let It Be delves into the years beyond the legendary reign of the Fab Four.

PHOTO BY PAUL COLTAS
The "Let It Be" cast during the "Sgt. Pepper's" era
Imagine a world where The Beatles never disbanded, never stopped touring, and when they did perform live, drew from their full repertoire, playing songs frm all stages of their musical career AND threw in some chart hits from each respective members' solo careers? Sounds too good to be true, right? It is, and since any type of reunion the Fab Four might have staged is impossible due to the untimely deaths of both John Lennon and George Harrison, Beatles fanatics can only play out this ultimate concert experience in their heads ... until now.

The latest incarnation of a tribute show to the Liverpudlian quartet who revolutionized rock n' roll promises to be one like none before it. Let It Be , a musical journey through the vast catalog of the Beatles, has enjoyed successful stints on Broadway, in London's West End and all around the globe. The show is currently touring through the States as a limited engagement and receiving rave reviews at each stop. As the only Beatles homage that covers both the Beatles' well known tunes and many of the solo hits each Beatle scored after the band's demise, the sheer ingenuity of the program is enough to excite and intrigue any Beatle lover.

I recently had the chance to speak to  JT Curtis  — a well-versed musician in his own right who performs the role of George within the successful production — from a tour stop in Indiana. Curtis has been a part of the show since its inception and still seems downright elated to be a part of such a unique assemblage.


So how has the touring version of the show been going?

Very well. We're selling out everywhere and the crowds are really, really receptive. They seem to be enjoying the show. We're conquering America all over again!

Would you describe it as a travelling concert? A tour? A Broadway show?

It's a musical experience [laughs]. It's a Broadway show that celebrates the music of The Beatles. This particular incarnation takes a more out-of-the-box approach with the reunion concept.

The second half of the show is sort of a "what if The Beatles had reunited?" concept. I've always been interested in being part of a show that took that perspective. We do some of the solo material. I get to do "My Sweet Lord," which always gets the crowd standing up and clapping along. It's a really fun moment. We get to play [Paul McCartney's] "Band On The Run"...and of course, lots of Beatles songs.

Would you say it's a new twist on this type of tribute show?

Right. Originally, the show started way back in the days of the Cavern Club and went through the Abbey Road album and that's where it stopped. Now, we've condensed that whole show into the first act and then the second act is where it takes off and becomes its own animal. 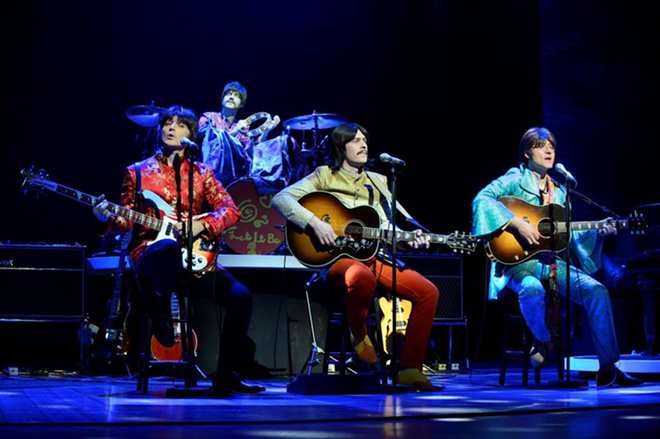 PHOTO BY PAUL COLTAS
An acoustic performance by the cast of "Let It Be"
What a great concept. Who came up with that idea?
It was [producer] Jeff Parry's idea. I think it's what makes the show so unique. I think that's why people are really digging it.

So what drew you to playing the George Harrison part?

Believe it or not, when I first auditioned for this show, I was going to try out for the John Lennon part. I'd played Lennon in another Beatles show before. When I auditioned, I mentioned that I could also do George's part. I created two demos and I spent a really long time on the Lennon one because I really wanted to get it right...and I sort of slapped together the Harrison one. They told me 'We think we like you better as Harrison' so I said 'OK!'.

What's the reaction been like from the audiences that have seen you so far? Is there a stronger reaction to the earlier material? Or to the later stuff?

It varies. It depends on where we are and it depends on the crowd. Some nights, the "Sgt. Pepper Reprise" will get a huge ovation and then, other nights, "Blackbird" is the strongest song. The great thing about The Beatles is that they have so many songs. Everybody has their own personal favorite moment or Beatles era.

You host a You Tube series in your spare time?

Yes, I have a " History of Rock and Roll " series. When The Beatles hit the Ed Sullivan Show (in 1964), it was like a bomb went off. Before them, Elvis Presley was in the Army, Buddy Holly had died and Little Richard was busy being a preacher and it was almost like, rock and roll was dead. Basically, The Beatles came out swinging. And then, they got into Dylan and Rubber Soul came out. People were like 'This is completely different' and they went from a folky thing to a psychedelic thing and then they went into a heavy metal thing with "The White Album" [their self-titled 1968 double album]. So, they grew so much as artists.

How did you originally get into The Beatles?

I guess itcame from my parents having a lot of their albums on vinyl. I kind of took notice of them when I watched The Simpsons episode, " The Be Sharps ," a barbershop quartet Homer was in where they did a lot of Beatles songs. I didn't really get some of the references so I asked my dad about them. He started introducing me and then I watched Yellow Submarine and that started my love. I grew obsessed with them. While I was in elementary school and everybody was listening to M.C. Hammer, I was listening to The Beatles. And little did everybody know, later, when we were listening to Nirvana and Pearl Jam, they they were really huge Beatles fans. Kurt Cobain was really into them which caused a lot of people to think 'Oh yeah...The Beatles are awesome'.

You have a pretty lengthy resume; a solo career, other bands you play with, your own solo albums, the YouTube series...how do you juggle all of that and this production?

It's difficult, actually. I was working on some videos for my solo album and then I had to start getting ready for this tour. But I really like doing this. It's not a burden at all. I get to play The Beatles! It's fun and I really enjoy it.

You're also a multi-instrumentalist, a producer, a writer, an engineer...which do you find most satisfying?

All of the above. Guitar playing has always been what I really love to do. It took me a while to get into singing...I was very insecure about my voice until I got to New York and I started playing every single night and then my voice got stronger. But playing guitar is really my forte.

How do you characterize or define George Harrison's role in the band through your performance?

Defining George's role requires a lot of self-restraint on my part. I grew up in the grunge era so onstage, I usually do my own thing. I've been known to be sort of a maniac — jumping around, stage diving, doing all those crazy things. To be George Harrison and channel his energy; he was very subdued. Later on, he got very Zen when he got into the Hare Krisha thing so it's really about finding that calmness. 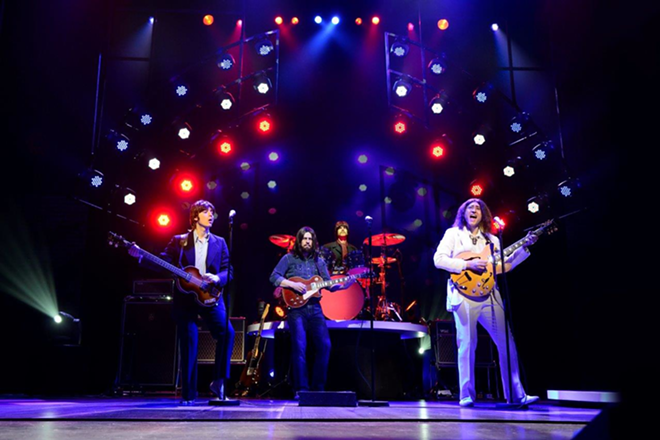 
So, your performance in Let It Be is against the grain of what an audience would see if they were watching one of your solo shows?

It's a role — it's an acting role. It's sort of like when Al Pacino (not that I'm comparing myself) plays a really mild-mannered guy and then later on he'll go (in a spot-on Pacino impression) "Oh! You think you're gonna get me? We'll you're not!!!" I do a lot of impressions! (laughs)

This show has traveled all over the world. What's the underlying message? What do you and the cast bring to it?

If there's a message to the show other than just playing The Beatles' music, is to reinstate their message of "All You Need Is Love" and "Give Peace A Chance". There aren't really many Beatles songs that say "C'mon kids, go out and hate your mom and dad." It's not really like that. It's very positive. Which is not to say that John Lennon couldn't be a rabble-rouser. He'd say things like 'You gotta stand up for yourself...stand up to the man' but he'd say it in more of a Gandhi-like way.

Why should Beatle lovers come see this particular show?

If you love The Beatles, and you want to see a really, really good show that celebrates their music, then you need to go see this show. And, even if you don't like The Beatles, you should still come see it because it's a really awesome show.

And, to close, I'll ask the inevitable question: what's your favorite Beatles song ?

Probably "Satisfaction," that's a good one [chuckles]. No, I don't know...my favorite changes every single day. Abbey Road is my favorite album but as for one song, that's a tough one.