Brainquility brings a new, weird funk to Spirit of Suwannee

The festival got its start with a 2018 event in Safety Harbor. 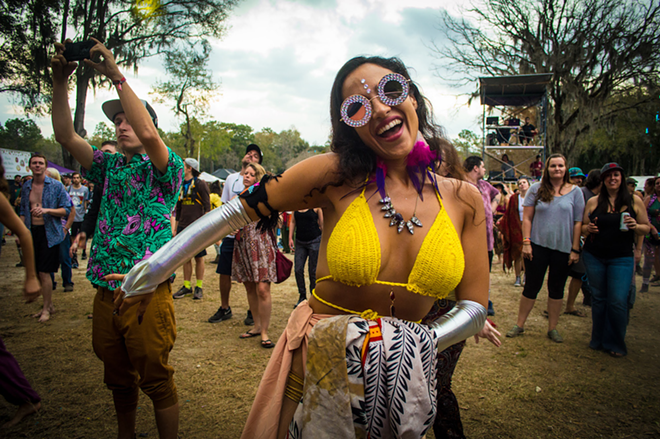 I know festival culture is weird in general, but Brainquility is a weird kind of festival. It’s the kind of place where you can see a guy in a MAGA hat wave to you with a hash pen in his hand on your way to a meditation workshop. Or perhaps hear a guy with a mullet ask a guy with dreadlocks if he’s “heard the news about our Lord and Savior, Dale Earnhardt Jr.”

While most of the attendees were on the headier end of the spectrum, the occasional confederate flag on a golf cart or “TRUMP 2020” sticker could be found sprinkled throughout the campgrounds. But despite the differing political and social ideologies present, the crowd was pretty harmonious in their celebration of mindfulness and music.

This being the first year of Brainquility at the Spirit of the Suwannee, it’s hard to imagine that it ever took place at Safety Harbor. The move not only allowed organizers to add camping to the festival, but a second day of music as well. Alternating between the Porch Stage and the sunken in Amphitheater Stage, there was rarely a lull in the music.

For the relatively small size of the festival, the production value was surprisingly better than most festivals with similar attendance, featuring animation screens and a good bit of lasers on each stage. Even cooler was the Silent Disco at the “Art Stage,” featuring many of the decorations from last year's tea garden at Okeechobee, a hand-built stage made of small slats of wood, and an iron dragon statue that spit fire late into the night.

Saturday’s lineup was a little more electronic heavy than Sunday’s, with most of the later acts featuring a mix of both prerecorded DJ bits and live instrumentation. While Roosevelt Collier, Zach Deputy and The Heavy Pets were great as always, Russ Liquid and Opiuo stole the show Saturday night. Performing without Andrew Block and Deven Trusclair, Russ Liquid (of the Russ Liquid Test) did a solo set that surpassed anything I’ve ever seen from him in a full band set. While most of the music he played was highly experimental bass music, he would layer jaw-dropping flute, trumpet, piano, and vocoder bits to create a unique blend of bass and funk that few others would be talented enough to replicate.

His set was immediately followed by his frequent collaborator and forever friend, Opiuo, who arrived in Florida from his native Australia a few hours before his set (read our interview with the latter here). Playing two drum machines with fluorescent, orange drumsticks, Opiuo brought his funky Aussie bass and high-energy stage presence to the Amphitheater Stage with full force. He even debuted two songs from his much rumored collaboration with CloZee.

Gainesville’s SIDE TRAKD opened both days with funk heavy DJ sets, and he also closed both nights as the silent disco. He wasn’t the only act to play both days, though. The electronic-funk duo Boombox, Chicago’s Chachuba and Atlanta’s up-and-coming electronic duo Bells & Robes each played, too.

As mentioned, Sunday’s selection was decidedly calmer than Saturday’s, featuring mostly jam-rock bands with a lot less bass and a lot more guitar. This included acts from The Headtones, El Dub, Octave Cat and Lotus. The main stages ended music at 8 p.m. when Lotus finished its set at the Amphitheater, leading directly into a two channel silent disco that only went until midnight instead of 4:30 a.m. like the night before.

All in all, Brainquility made an impressively seamless transition from Safety Harbor to its new home at the Spirit of the Suwannee, putting on a solid festival that could prove much needed in an ever-thinning Florida festival scene. Seeing as Florida lost Wanee, Okeechobee, (probably Zen Awakening as the Facebook event was recently deleted) and Dirtybird East in 2019 alone, new festivals are a necessity in this ever growing community. While the festival likely did not sell out by any means, one can be hopeful that Brainquility will return in 2020 at Suwannee to fill in some of the gaps left by other festival’s passings. At Suwannee, it’s hard to go wrong with a festival, but On Tap Music did a great job bringing this event to life and making it as immersive as possible for the size.