Can binaural beats improve your mood? 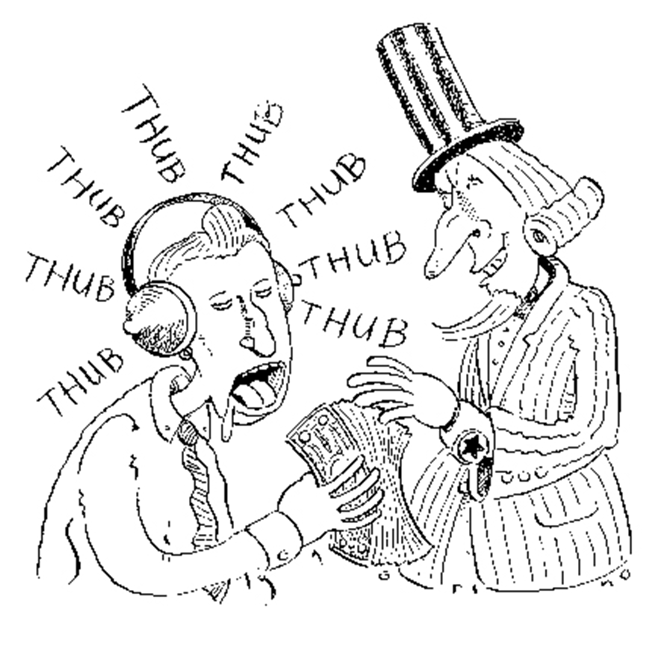 Illustration by Slug Signorino
Can binaural beats improve your mood?

I've been hearing about the positive effects of binaural beats and how they can alter your state of mind. Can listening to a strange tone for hours on end really put me in a different mood other than annoyed? Should I be worried that my Xbox 360 is going to make me have a seizure or that the government is trying to induce me to pay more taxes? —Liam, Singapore

Liam, think. When the Singaporean authorities want to modify someone's behavior, they don't screw around with binaural beats — they've got canes.

Binaural beats (BBs), embraced in recent years by the new-age crowd, are a scientific curiosity first described in 1839 by Prussian scientist H.W. Dove. They occur when two slightly different tones are played simultaneously, one in each ear, causing the brain to perceive a beat whose frequency is the difference between those of the two tones. For example, playing a 370-hertz tone in the left ear and a 380-hertz tone in the right yields a beat with a frequency of 10 hertz.

You'd notice something similar if you simply set two tone generators side by side, but it'd be a monaural beat — you could hear it with just one ear. What's different about binaural beats is that the mixing of the two tones happens in your head.

The BB phenomenon was brought to modern attention by Gerald Oster in a 1973 article in Scientific American. Oster determined that the tones needed to produce the beats were relatively low-frequency and the beats themselves were in the range of one to 30 hertz. Human brainwave frequencies, as it happens, fall within the same general range.

Now we get to the woolly part. Some researchers have theorized that binaural beats can help change the frequency of your brain waves. Different brainwave frequencies are associated with different mental states. Frequencies from 30 to 14 hertz are the beta brainwave pattern, typically seen when we're awake and active. Patterns from 13 to eight hertz are called alpha patterns, and occur when we're relaxed. From eight to four hertz we enter the theta stage,observed during REM sleep and meditation, and below that we fall into the deep, dreamless sleep of the delta pattern. Use BBs to slow down somebody's brain waves, the thinking goes, and maybe you can get them to relax.

Considered individually, some components of this theory aren't completely wacky. For example, Japanese researchers found that when they played slow binaural beats to subjects hooked up to lab instruments, the subjects' brainwave activity synced up with the perceived pulse.

However, the real question is whether you can package these interesting test results into an effective mood-relaxation product that can be sold online for $19.95. One common claim is that BB recordings can help reduce anxiety. Some research suggests they can:

• One study of 104 patients undergoing general anesthesia for surgery — a classic anxiety-causing scenario — showed that when they listened to music CDs containing embedded binaural beats, their anxiety decreased by a quarter compared to a control group. Lest we make too much of this, patients who listened to normal CDs showed an 11 percent decrease in anxiety, suggesting that listening to any music helped.

• A study of 14 pre-operative patients in Montreal listening to commercially available delta- and theta-range BB tapes found they were noticeably less anxious, with those younger than 40 getting the most benefit.

• A Duke University study comparing the effects of delta, theta and beta BBs reported that subjects listening to beta beats performed better on an alertness test, and their mood was better overall.

Maybe it was. However, you can find lots of evidence pointing the other way:

• A study of anesthesia requirements for 60 patients listening to either a BB cassette or a blank tape showed no differences between the two groups.

• A test of the impact of theta and beta BBs on the pulse and blood pressure of 12 volunteers showed no significant differences.

• When researchers played BB tapes to 30 people undergoing stomach-bypass or back surgery, they found the bypass patients needed less anesthesia than a control group but the back patients needed slightly more.

You can guess what I think of all this, which is one reason I'm never going to make money as an entrepreneur. Others have fewer doubts — they claim their BB CDs and MP3s will help you relax, alleviate attention-deficit disorder, simulate drug experiences and "help your brain induce a state of warmth, exhilaration, tantrism and climax." If you're skeptical or just cheap, you can try a free online BB tone generator such as Gnaural or SBaGen. Personally, I'm sticking with proven sonic relaxants — Pink Floyd, let's say — plus some Baileys just in case.

Send questions to Cecil via straightdope.com or write him c/o Chicago Reader, 11 E. Illinois, Chicago 60611. Get more Dope online at cltampa.com/straightdope or subscribe to the podcast at the iTunes Store.