And there was not one MAGA hat to be found. 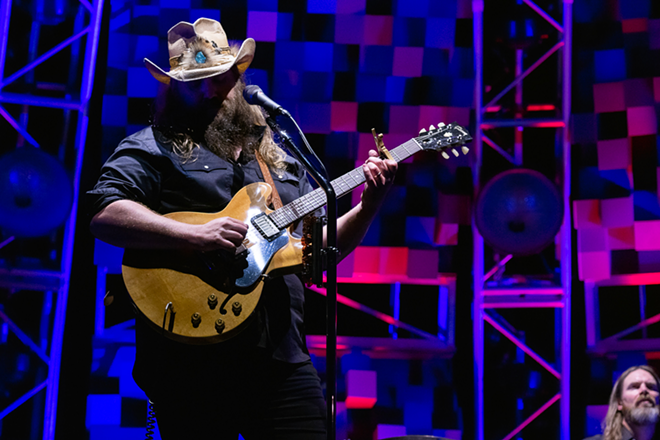 Photo by Tracy May

For all intents and purposes, Chris Stapleton is a country artist. The genre is where his albums live at the record shop. He’s earned multiple Country Music Association awards, and the country charts are where his songs (including that multi-platinum cover of David Allan Coe’s “Tennessee Whiskey”) regularly appear. He even looks the part, thanks to the big beard and white cowboy hat with a prominent turquoise accent at the crown. A large percentage of his fans, who patiently filed into a sold-out MidFlorida Credit Union Amphitheatre in Tampa, wear cowboy boots and looked the part on Friday night, too.

But there’s something about the Kentucky-born 41-year-old, and his performance, that feels undecidedly country.

RELATED: Photos of Chris Stapleton and Brothers Osborne in Tampa

Sure, parts of his life (he’s the son of a coal miner) and a few of his songs stick their tongues in their cheeks and play to genre clichés (“Nobody To Blame”), but pretty much everything Stapleton played during a two-hour set completely dodged country-tropes that have dogged country radio and most arena-filling country music concerts for what feels like forever.

And when Stapleton opens his mouth to sing, it’s hard not to start wondering about all the other non-country music that’s influenced him over the course of a career that’s seen him produce artists like Jason Isbell and Sturgill Simpson before eclipsing their popularity and infiltrating the mainstream the way Kenny Chesney and George Strait have (Stapleton has written songs for Mr. Chillaxification and Strait, too).

Stapleton’s scream before set-opener “Second One To Know” was strangely reminiscent of the Ozzman.

The melodic restraint and veiled meditation on mental health in “Fire Away” had the feel of a coffee shop performance, and the cool sound of minor-seventh chords on “I Was Wrong” served to let Stapleton croon with the pain of an old soul singer. An extended, slow-building and feedback-laden intro to “Death Row” had the psych-rock feel of a Black Crows song and then gave way to the rest of the cut which had the cadence and tone of the more memorable moments of Joe Cocker’s catalog.

Like his breakout 2015 album suggests, Stapleton is a Traveller in every sense of the word, and he unapologetically treads the territory surrounding country music at every turn.

The wandering, however, hurt the show at times. It was really cool to see the way Stapleton navigates the low strings on “Outlaw State Of Mind,” but there were times when the set lacked pace. As a tired face on the jumbotron indicated during the big-ol’ sing-along on Stapleton lullaby “Broken Halos,” there are moments when you wonder what some of the songs would sound like fleshed out with horns in the live setting.

But that’s not who Stapleton, who turned down record deals for years, is. He’s different, and so are those aforementioned fans. As previously mentioned, there were boots, cowboy hats and the occasional overtly-’Merica wardrobe decision, but the over-the-top Blue Lives Matter and MAGA-or-die vibe that often accompanies blockbuster country music tours never entered my atmosphere. I’m pretty sure I saw a guy in cowboy boots and a “Be A Good Human” shirt buying a beer in the concession line.

That’s a really simple mantra to follow, and that’s what the Stapleton catalog essentially represents. Strength in simplicity, the willingness to travel to where the better parts of your soul tell you to go, and the refusal to give into tropes just to fit in or be successful (well, besides the whiskey — the guy sings about whiskey a lot).

Stapleton might not be the quintessential arena-filling country star, but he’s also more talented than the ones who lean on big trucks and first-responder love to rope in their flock. In song, and in spirit, Stapleton is a traveling man. The other big stars of country would do good to try and tag along.

Listen to songs from the set via Spotify.

Setlist
Second One To Know
Without Your Love
Nobody to Blame
Might As Well Get Stoned
Parachute
Millionaire (Kevin Welch)
Fire Away
I Was Wrong
Starting Over (new song)
Whiskey And You
Either Way
Hard Livin’ (w/Kendall Marvel)
Get Down To Arkansas (w/Brothers Osborne)
Traveller
Outlaw State Of Mind
Death Row
Freebird/The Devil Named Music
Broken Halos
Tennessee Whiskey (David Allan Coe)
—
(Full disclosure:  I left before the encore.)