He releases the album at Crowbar in Ybor City on January 20. 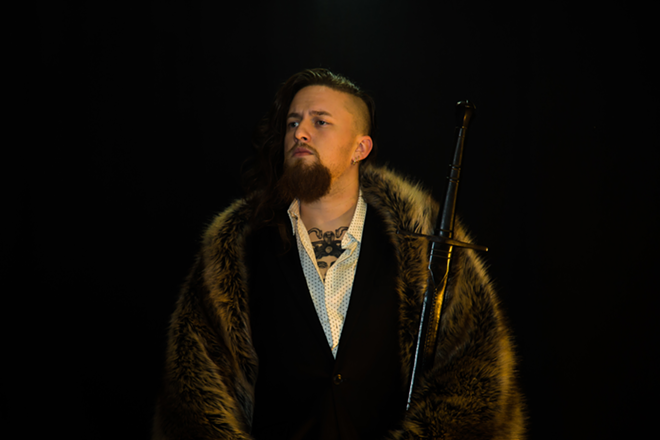 In our Spring Arts issue, we call Tampa composer Achilles the Conqueror one of the Bay area music scene's buried treasures. A lot of that has to do with the attitude the 31-year-old brings to his music and to the stage.

Fans can get a chance to see it up close and personal on January 20 when Achilles unveils a new album, Valor, at an album release show/birthday bash featuring Charles Burns from the 79 Sorcery collective, BOTB-winning rock outfit Bangarang, Portland's Black Pussy and Tampa prog-rock band Rising down. Another "buried treasure" — Kid Loki — will be there as well.

But first, a party.

"I definitely wanted to make this album bang. I wanted it to be something that people can ride out to before a wild night," Achilles told CL in a message. "PRISM is definitely the song that kicks everything off on the album."

The track opens with the composer's "usual shit about being a God and what not," but then our pagan hero releases some horns and a stable of 808s to put a short, but punchy, accent on an album that promises to slap a bit and keep listeners guessing.

Achilles says to expect the unexpected at the show, which'll be hosted by another 79 Sorcerer (photographer, filmmaker and CL contributor Michael M. Sinclair) and catered by another BOTB-winning personality, Mic Deluxx.

"I never really rehearse my music," Achilles said. "I kind of just get on stage and party, so all my style and movements are 100-percent natural."

Listen to "Prism" — and get more information on the show — below.