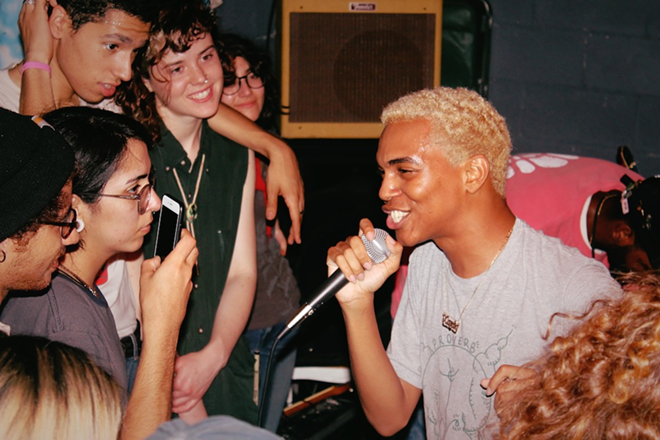 They Hate Change’s Clearwater — released last month via Santa Maria, California imprint Deathbomb Arc (JPEGMAFIA, Lana Del Rabies, more) — is exactly what fans of Tampa Bay’s underground music scene needed during the first few weeks of spring. And as the Instagram caption under the new EP states, now is the time to “Have fun with us before we get sad again.”

Although it was recorded at the same time as the band’s last full-length — Now, and Never Again, which CL listed in its 2018 rundown of the year’s best local releases — this new group of tracks stands juxtaposed against the ambient, hazy instrumentals and dark undertones of They Hate Change’s most recent work. In short: It’s just plain fun.

When asked about why it named the project Clearwater, They Hate Change’s Vonne and Dre (John Harrison and Andre Gainey) gave two answers. The first explanation, the easy one, is that the tracks were made in Clearwater. The philosophical answer, as Vonne explained, is that They Hate Change’s home base is outside of the scene.

“Nothing happens in Clearwater, but that’s where we live,” Vonne said. “It’s not St. Pete, it’s not Tampa, it’s right outside where everything is happening.”

Shying away from the more visible Bay area hip-hop scene, or being consciously left out of it, has been a consistent theme for the electro-rap duo for its entire, nearly eight-year, existence. Vonne and Dre met about 10 years ago, during those formative years of being 14 and 15 years old. The duo was part of a larger group of neighborhood kids in the Oldsmar area who played together, but the spark between the two of them — on both an intellectual and creative level — was the catalyst for a friendship and music collaboration that is still going strong a decade later.

“Vonne and I clicked on a different level — like we were on something a little different,” Dre said. “And when we started making music, we felt like maybe other people weren’t trying to hear that. Or that they wouldn’t really respond to it.”

With three albums and even more EPs already under its belt, They Hate Change continues to make music for itself — and Dre and Vonne are still constantly challenging each other along the way, too.

The symbiotic nature of Dre and Vonne’s back-and-forth rap style has been consistent throughout all of the duo’s releases. A playful tactic the pair has recently utilized in their songwriting is a spin on the regional beef that’s a staple conflict in old-school hip-hop. Vonne (a Florida native) and Dre (who is from Rochester, New York) verbally spar with each other, contradicting each other’s witty colloquialisms. Another element the friends borrow from traditional rap culture is the use of interludes to break up the dense lyricism of They Hate Change’s other songs.

“Old rap songs had a lot of interludes, usually repeated ones. It was a production, it was almost like watching TV,” Vonne said. They Hate Change also takes influence from music other than hip-hop; the group has borrowed from a wide variety of styles. One of the genres that inspires the duo, according to Vonne and Andre, is the largely un-impressionable sound of ambient music.

“It’s music that’s supposed to be in the background filling up space. You’re not necessarily supposed to engage with it. But we try to mix ambient music with rap, which is music that demands to be engaged with,” Vonne said.

“We’re constantly trying to find the balance between ignored and engaged music,” he added as Dre nodded in agreement.

And while Clearwater may be just 11 minutes long, it still demands that listeners hold on to it. It’s filled with the quick back-and-forth verses, hidden themes, repeated nuances, and vaunted wordplay that They Hate Change has brought to every one of its releases. The EP is dense, but its short runtime makes it easy to partake in repeated listens.

Despite Clearwater’s makeup — the overall sound is more engaging and upbeat than anything Vonne and Andre have released — They Hate Change’s creative process remains the same. The pair has always started with instrumental tracks before adding individual verses. Since the beginning, all of the songwriting has been done at home, but with time and experience from live shows, They Hate Change has learned how to consider how an audience interacts with and responds to the music.

“We would perform some songs that we didn’t necessarily plan on releasing. And it would turn out that people actually wanted to hear it,” Dre said about his band’s experiences in Tampa Bay’s DIY scene. House shows, like the one They Hate Change will play in St. Petersburg on April 6, have traditionally been a safe harbor for punk acts. Punk, according to Dre, influences the way his band releases music, too.

“It’s like old punk bands, you know? They’d play shows for like two years before they released a 7-inch — you had to go to the show to hear the music. We like to utilize that philosophy,” Vonne said. They Hate Change, frankly, is as punk as punk gets.

Clearwater is on all streaming platforms. Follow @theyhatechange on Instagram to find your way into one of the many house shows the band plays or see them at a public space when Daddy Kool Records re-opens in St. Petersburg’s Warehouse Arts District.