Concert review: Captured by Robots at Orpheum in Ybor City

With absolutely no idea of what to expect, I headed into the Orpheum on Thursday night to see a performance by Captured by Robots. Now, truthfully, I did take some time to check out the band’s website so that I could prepare myself for the show, but it wasn’t nearly enough.

Taking the stage in chains, a leather bondage mask with protruding eyeballs and disemboweled entrails hanging from a bloody t-shirt, robot abductee JBOT conducted the Teddy Bear Orchestra while whipping the crowd into a motivationally charged frenzy. In addition to JBOT, the band consists of GTRBOT66 (who plays a double-neck Flying V), percussionist AUTOMATON, drummer DRMBOT0110, The Headless Hornsmen, The Ape Which Hath No Name and finally Son of Ape Which Hath No Name.  Bear in mind that JBOT is the only living creature on the stage; the rest are real robots. The band’s set consisted of 80’s rock and pop covers, including a decent cover of Bruce Springsteen’s Born to Run.  As for JBOT himself, think of a cross between Andy Kaufman, Jim Henson and Dale Carnegie. Believe me, it’s a frightening combination.

In all, the show was much more entertaining than I had expected. JBOT combines comedy, music and motivational speaking into a single performance, and somehow it works. A few minutes into the set, I found myself getting into the show and even singing along. Anyone who showed up at the Orpheum expecting a dead-on cover of Red Rain or Hotel California was probably disappointed, but those of us there for a show, went home smiling. It’s not a show for the kids or your first date, but well worth seeing during their next visit to Tampa.

Check out Captured by Robots online 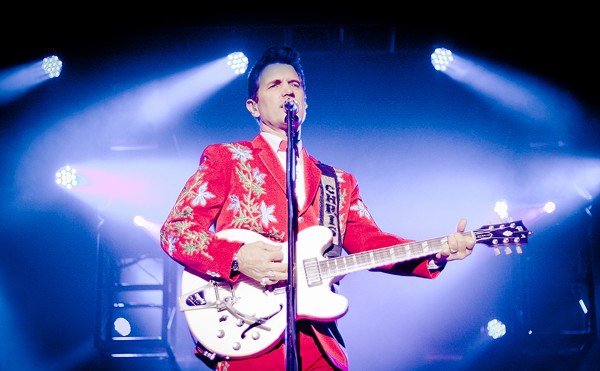