A look back at the Wed., June 8 show in Clearwater, with photos.

The always colorful and dynamic Cyndi Lauper kicked-off Wednesday night's much-anticipated concert at Ruth Eckerd Hall behind a curtain. As her petite, feminine silhouette appeared at the rear of the stage perched atop a large platform, screams and roars from her most ardent fans (who packed most of the seats at the plush theater) drowned out Cyndi’s opening notes. But it wasn't long before Ms. Lauper revealed herself, standing boldly in her very own true brilliant colors to greet the crowd and let that mighty voice of hers fill up every crevice of the room. [Text by Gabe, photos by Tracy] Touring behind her latest release, the country and western-soaked Detour, Cyndi got things started with a smoking cover by rockabilly queen Wanda Jackson, 1961's “Funnel Of Love.” Holding a prop suitcase and wearing a wide-brim flat black velvet hat over cotton candy pink locks, Lauper looked like an eccentric yet elegant foreign traveler as she poured every ounce of her powerful pipes into every note she belted.

Lauper kept her crowd rapt and engaged as she gingerly skipped through a clever set list, flip-flopping between her own catalog of well-known hits and blowing dust off of decades-old country classics.

The night's true standouts, however, were the engaging bits of between-song banter and anecdotes Lauper shared throughout the evening. Relating charming stories of listening to country music as a small child or watching Roy Rogers and Dale Evans on TV as a youth, Cyndi had every one of us sold on the fact that this Queens, New York native is more than just a little bit country.

Unfortunately, several attendees in my general seating vicinity decided these lovely heartfelt moments were a chance to chit chat, loudly, in total disregard for the charismatic 62-year old dynamo who was holding court center stage. As she was delivering a heartfelt, gut-wrenching tribute to the recently deceased Prince and getting choked up in the process, the worst offenders of the night (who happened to be right next to me) were escorted out, and it was hard to tell if the huge outpouring of applause that followed was for Cyndi’s touching eulogy or for Mr. and Mrs. Talkie Face being asked to leave. Nonetheless, her rendition of the Purple One’s “When You Were Mine” (which she covered on her multi-platinum 1983 smash debut, She’s So Unusual) was the absolute incendiary highlight of the evening…although there were plenty of superb moments throughout the 90-minute program.

A six-piece band that included a female backup singer added plenty of firepower and sizzle to Cyndi’s always-impressive dance moves, her onstage charisma and her unfaltering vocal gymnastics. She warbles, she hiccups, she wails, she croons ... but she makes it all sound extraordinary.

A nice nod to the pre-fame eockabilly/New Wave band she fronted, Blue Angel, drew a few scattered hollers from those in the know and her take on Ray Price's 1959 classic “Heartaches By The Number” recalled the days when she fronted that early group. A little country, a little kitsch, a little sparkle, but a whole lotta Cyndi.

The churning New Wave dance beats of “Money Changes Everything” closed the main set, which gave way to three rousing encores that featured Lauper’s mega-hits. A solo take on her classic ballad “Time After Time” found Cyndi strumming a dulcimer and leading the audience through a spirited sing-along. Her unmistakable anthem, “Girls Just Want To Have Fun” was preceded by a fierce battle cry for equality and equal pay for women. As the ladies in the crowd gleefully cheered Cyndi on, she led them through a bouncy, boisterous version of her signature song as accompanied by The Peach Kings, the LA-based male-female duo who opened the show with a haunting, eerie blues-soakedset of their own. 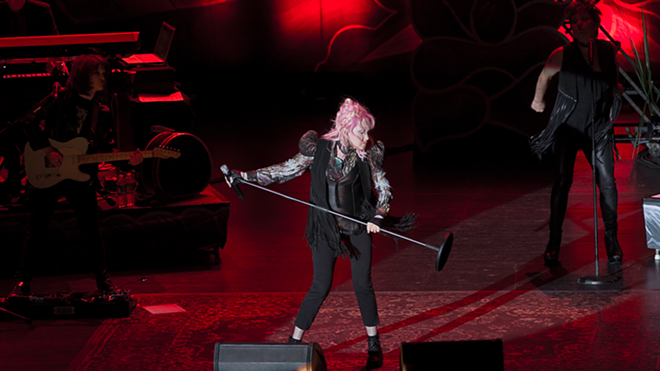 The most poignant moment came during the night’s final show-stopper. Lauper (a staunch supporter of LBGT community rights) began the gorgeous “True Colors” by saying, “Ya know, ith everything that’s going on today….” in her trademark thick New York accent, and it was clear what she was referencing. A few acapella bars of her 1993 song “A Part Hate” led into the night’s closing ballad. A dramatic pause after the song’s most powerful line -- “...don’t be afraid...” -- was met with equal parts pride and passion, while her closing exclamation was met with yet another rousing ovation: "You got your heart and your mind…don’t give up your power!”

And with that indelible message of hope and love, Cyndi concluded yet another night of dazzling showmanship and left a room full of appreciative elation in her wake.

Heartaches by the Number

I Drove All Night

The End of the World

I Want to Be a Cowboy's Sweetheart

When You Were Mine

Girls Just Want to Have Fun 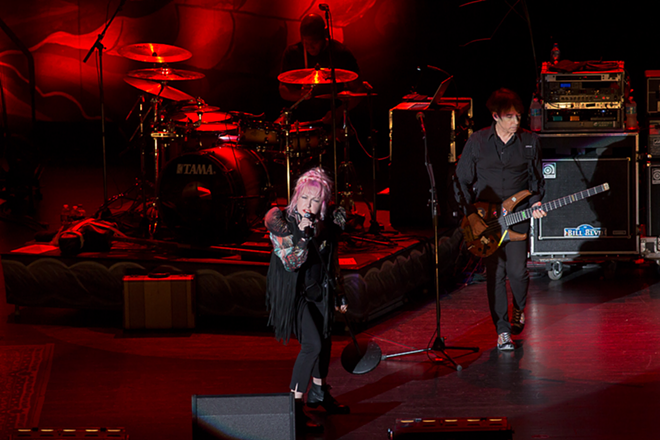