Concert review: Joey Bada$$ raps beyond his years at Orpheum

The young rapper played to a packed venue in Ybor on Saturday night.


Joey Bada$$ is a rap anomaly: a fresh-faced 20-something who bucks all expectation by sounding like a rapper from 20 years ago. He's the walking, talking answer to every crate-digging, stroller-pushing old-head moaning “hip hop ain't what it used to be,” and a good one at that, but how far can a lane like this take an emcee in 2015? 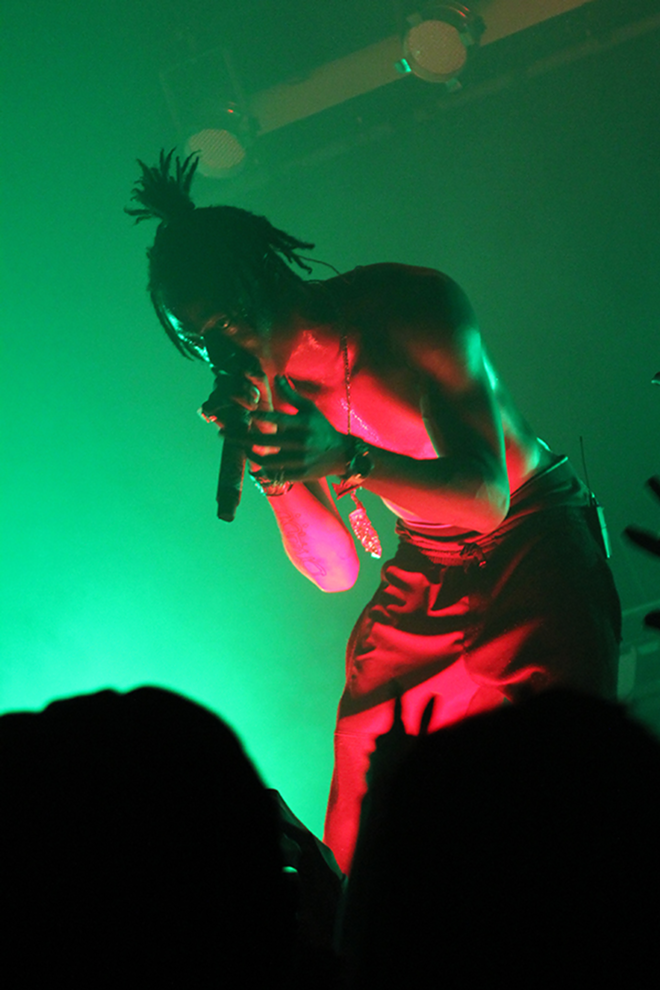 Andrew Silverstein
Joey Bada$$
Honestly, farther than I expected. He's no radio-darling like Drake or J. Cole, but his debut album, B4.DA.$$ (Before Da Money) dropped earlier this year (and soon reached a sales peak of more than 120,000 copies); he founded his own collective of like-minded emcees; and he's got a co-sign from the daughter of our Commander-in-Chief — all while still under the drinking age.

If his Saturday night show at the Orpheum was anything, it was the perfect culmination of just how weird, promising and influential Joey's career has already been, and likely will be for the foreseeable future.

Coming out to a mass of smartphone-clutched hands, Joey commanded the stage for a brief, but hit-packed 45ish-minute set starting with the hymnal, boom-bap sound of “Paper Trail$.” A mix of B4da$$ tracks—”Big Dusty.” “Hazeus View” and an all-ladies-onstage version of “Teach Me”— and others followed. Joey, shirtless and sweat-soaked, led a near-packed house that collectively echoed each word, hands raise, heads bopping, and even mosh-pitting for a brief minute in the middle of the set.

He's come a long way since I last saw him in 2013. Fresh-off the buzz from 1999, the mixtape that put him on the map, Joey was understandably hyped on his new fame, but you could tell he was new the whole live thing, barking his lines in a fit of way-too-lit-ness that almost made you exhausted by just having to watch it.

This time around, Joey was more multi-dimensional, a result of a seemingly never-ending tour since then. Low-key songs like “Waves” and “Hard Knock” came to new life as he poeticized with laser-sharp precision. Big numbers like “World Domination” and his feature on Glass Animals' “Lose Control” felt huge as he bounced along with the sea of fans on the floor.

Not once did I feel like I was watching a kid born in ninety-fuckin-five on Saturday night. Throwback style aside, he's a masterful performer with an older and wiser sensibility than dude's twice his age. Only four-ish years into his career, Joey's in a lane that might not lead to paychecks as big as his peers', but will still end up in the same place of greatness.