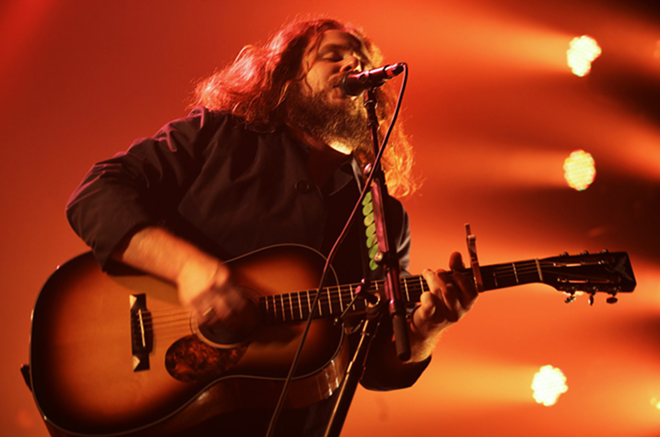 I'm starting this review with full disclosure: My Morning Jacket has been one of my favorite bands for longer than any other band I still listen to regularly. Something about their early alt country leanings reached out to me, and as their sound has grown and evolved, so have I. Their music has been such a constant presence that if a soundtrack to my life were ever scored, it would be, without question, peppered from start to finish with their songs. [Text by Deborah, photos by Phil]

Loving the band for this long, I've started to feel a little like I know them personally. So when vocalist Jim James came onstage to a small group of 100 fans for soundcheck, laughed, and commented, "Well, this isn't awkward at all," strangely, it wasn't; nothing could've felt more natural. Making eye contact with our small group at the base of the stage and smiling humbly as they played, not the band known for larger-than-life shows right then, but just a group of guys. They played a brief three-song warm-up, Jim talking to us briefly as though we were just a bunch of friends. He grumbled a bit about how the management at Universal Studios wouldn't provide a courtesy ride on the Simpsons 3D. Based on his description of it as a "life changing event," I certainly hope that someone was listening and able to pull some strings for them. I know it's the first time I've really felt the need to go into the park at all; Mr. James is an excellent salesman. The band turned out as very much the people I'd expected them to be, leaving the stage with huge grins and a simple "see ya tonight."

When they returned to the stage a few rainy hours later, it was full game-on as they immediately blasted into the thunderingly loud bass and Valkyrie call of what I was hoping would be the opening song, "Victory Dance." The first song from this year's Grammy-nominated, Circuital, is by far the most epic intro we've heard yet to a My Morning Jacket release and delivered on every expectation of what I thought it would be live. As Jim bounced across the stage backlit by an eerie green glow of light, nearly every hand in the crowd was waving joyfully in the air.

Overall, the concert was more energetic than even a typical MMJ show, with the band playing almost a quarter beat faster on every song. This was most apparent during "Outta My System," its nostalgia-tinged chorus taking on entirely different feeling with this kind of intensity and the frenzied dancing it induced from the crowd.

The set was only slightly heavy on songs from Circuital, and (if you count the soundcheck songs) they played something from every album except The Early Recordings. For those geeky enough to follow these things, "O is the One That is Real" followed by "Xmas Curtain" was especially amazing, since they've rarely played them back to back since their 2006 live album, Okonokos. Two of my high points were the explosive ending energy of "Smokin from Shootin," and "Touch Me I'm Going to Scream Part 2" with its healthy dose of Omnichord and disco funk. The band basically made everyone melt with an extended, psychedelic jam at the end of "Off the Record" and the absolutely shredding guitars of "Magheetah," with a short solo from Jim at the end.

The encore pulled the crowd together with the intimacy of "Bermuda Highway," "Wordless Chorus," and "The Day is Coming," all three really highlighting either the sound at Hard Rock Live that Sunday night, or just simply Jim's voice, which was just absolute perfection throughout the evening. They ended with the usual, "One Big Holiday," and its blistering guitar solos and blinding light. God, I wish there had been guitar smashing … it would have made this show the absolute best, ever.

My Morning Jacket delivered exactly what we all came for, a kickass rock show. Unlike past performances, there were no boots, no masks, and no gimmicks (but of course, a cape). It was raw, powerful and would make anyone who was seeing My Morning Jacket for the first time walk away with the absolute heartfelt belief that they've earned their nod as best live band of 2011.

Setlist:
Victory Dance
Circuital
It Beats 4 U
The Way That He Sings
I'm Amazed
Outta My System
Wonderful (The Way I Feel)
X-mas Curtain
O Is The One That Is Real
Steam Engine
Movin' Away
Golden
Holdin On To Black Metal
Smokin From Shootin (ending with) Run Thru
Touch Me I'm Going To Scream Pt.2
Off the Record
Mahgeetah