Belting out with falsettos and a nasally intoned but eerily sexy vocal, Thee Oh Sees frontman John Dwyer ravaged his custom electric held high to his chest at the Crowbar last Friday night for an epic Aestheticized Presents show. The manic hobbit commandeered a rousing and soul-satisfying show that had the trance-inducing power of hummingbirds and wizards conjured during an RPG bender.

The at-capacity crowd, easily three generations represented, moshed and body-surfed, ebbing and flowing like a giant body-crushing wave in the sold-out sweatbox. The 40-year-old frontman summoned the enhancements of tape delays, spacey echoes and reverb effects — a swirl of psychedelic, garage rock and surf rock. 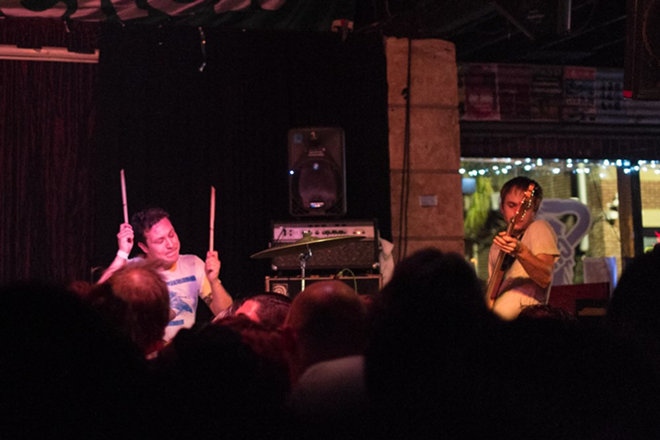 ANDRES RAMIREZ
Concert review: Thee Oh Sees induce a trance-like mania at Crowbar
San Fran-based but originally from Rhode Island, Dwyer is known for employing a revolving roster with TOS members coming and going since the early 2000s. Thankfully, he brought us a winning lineup to Ybor, fortified by the dual drumming attack of Ryan Moutinho and Dan Rincon, and nimble bassist Tim Hellman.

The drummers played their side-by-side kits in impressive unison, providing a tight backbeat beefed up by bassist Hellman’s punctuated basslines as the band cycled through tunes off its 2015 Castle Face release, Mutilator Defeated At Last.

Everyone praised the show as the best they'd attended in a long time, this reviewer included, and openers Plastic Pinks (which play Plan B this Saturday) and Jensen Serf Company more than amply warmed up the crowd.

One complaint: Dwyer lamented good-naturedly that people along the back left wall had emptied the band's backstage beer cooler. (Sigh.)  Thee Oh Sees graciously played an encore anyway, and will hopefully return despite such the breach of audience etiquette.