The grooving rock duo landed here this past Sat., May 21, with support from Sharon Jones and the Dap Kings, and Trombone Shorty.

The names were everywhere — “Daryl Hall and John Oates”; emblazoned on tee-shirts and tank tops, on the marquee, the tickets. “Hall and Oates” were nowhere to be found on this balmy Saturday night at the MidFlorida Credit Union Amphitheater in Tampa. Just Daryl Hall and John Oates, two guys with a superabundance of soulful hits and good reason to reap the benefits of performing them in a venue of arena-size magnitude.

Over the course of 90ish minutes, Daryl and John dished out 14 cocaine-era hits with a palpable indifference towards each other and the thousands who'd come to see them.

Emerging in front of a well-rounded backing band (drums, bass, tenor sax, keys, guitar), the gentlemen took the stage to rapturous applause before getting straight to the point with ’82 smash hit “Maneater.” The energy was palpable, but if you listened close, the sound was a mess; the bouncing bassline and Oates' falsetto harmonies were barely discernible beneath Hall’s piping lead, his mic keyed so high he drowned out all the hallmarks of an otherwise great song. “Out of Touch” and “Family Man” followed in the same vein, Hall’s vocals the focal point that overwhelmed every instrument besides the drums.

Things took a welcome turn as the band veered from upbeat to down-tempo with a cover of the Righteous Brothers “You’ve Lost That Lovin’ Feelin,” a beautiful showcase of Oates’ rarely exercised (but arguably better) lead vocals and head-bobbing sing-along vibes that totally clicked in this live setting.

“Las Vegas Turnaround” was a light reprieve, featuring one of roughly nine saxophone solos from Charles "Mr. Casual" DeChant. Donned in a god-like get up of all-white suit topped by long white hair, DeChant was the low-key MVP of the show, wailing away, then bowing out before appearing again with another straight-from-the-'80s but superbly executed solo. As the set started to reach peak-loquaciousness, Mr. Casual's magnetizing presence lit up songs like “She’s Gone” and “Do What You Want, Be What You Are.” The latter culminated in an instrumental jam of sax vs. guitar that might’ve been one of the best moments of the show.

Giving credit where it’s due, Hall and Oates sure know how to finish strong. The chic vibes of “I Can’t Go For That” extended into a nine-minute flurry of true talent with everyone on stage showcasing their chops in one way or another over the course of the song.

The requisite encore was a one-two punch featuring the cheesy but irresistibly catchy “Rich Girl” and “You Make My Dreams Come True.” By now, it felt like an entirely different show. Sure, the mix was still off if I’m really being nit-picky, but it's hard to be critical when you’re surrounded by such genuine joy. Butts once perma-glued to seats were up and shaking around. Smartphones once delegated to pockets were up in full force. The band left the stage and the crowd shouted for more, eventually drawing the musicians back out for a second encore. This time, the mellow “Kiss on My List” segued into “Private Eyes” for a rapturous sing and clap-along that practically made up for all the night's previous transgressions.

While I could chalk it up to heightened expectations, as a whole, the show let me down just a little. Hall and Oates are a force who've sold millions of records over nearly five decades together, and I’ll always love them. But maybe it’s best to do so from a distance. 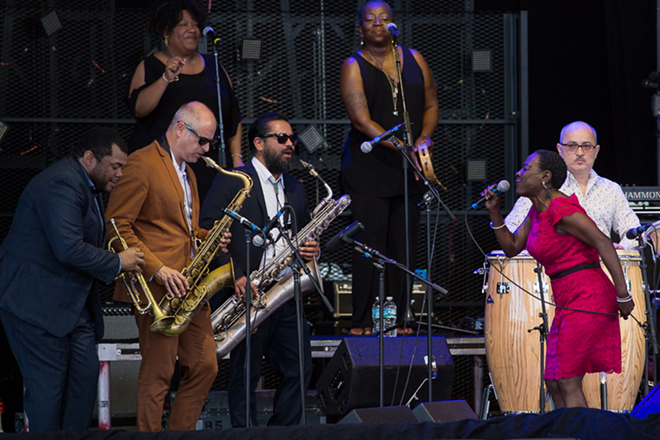 Tracy May
Sharon Jones and the Dap Kings
click to enlarge 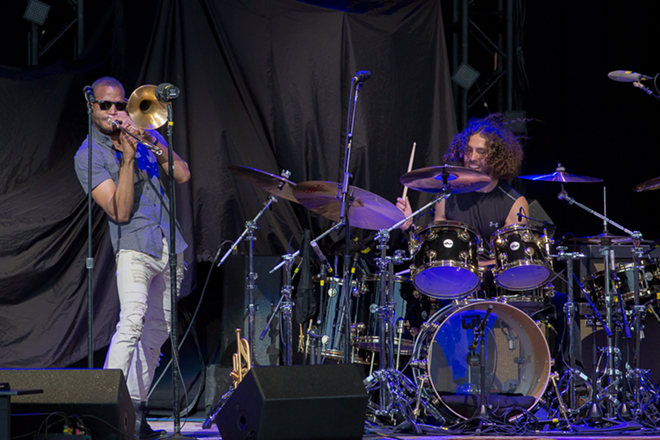