It seems like the city’s hands are tied, but critics say local leaders should do more. 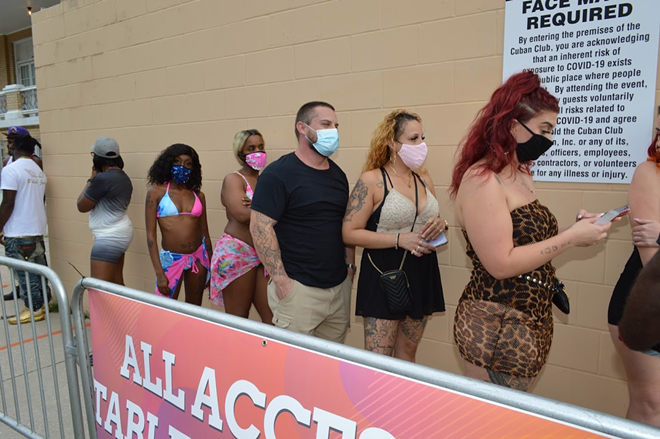 Courtesy of the Cuban Club
Patrons wait to enter the Moneybagg Yo concert at the Cuban Club patio in Ybor City, Florida on August 29, 2020.

Last weekend’s outdoor, alcohol-free Moneybagg Yo concert at Ybor City’s Cuban Club is raising eyebrows with concert goers and the public, but at the end of the day there’s not much stopping similar events on private property from happening in Florida anyway.

On the Tuesday after the concert, Patrick Manteiga, president of the nonprofit Cuban Club Foundation, told Creative Loafing Tampa that the promoter, Dwayne Williams, reached out to him about the concert two weeks ago.

Once an agreement was reached, Manteiga and Williams’ teams created a safety plan that included the exclusion of alcohol sales, socially-distanced seating on couches, temperature checks at the door and limited capacity. The club’s patio can hold 2,300 people; the Saturday concert had just 500 tickets pre-sold, with no tickets available at the gate.

“For us, putting on this concert was not about the money. We wanted to see how and if it could be done—we had safety on the top of our minds” Williams told CL. He’s now booked Moneybagg Yo three times in the last three years, and Saturday’s show found the rapper and his team driving in-and-out from Atlanta to avoid going through airports.

Critics have lobbed criticism at the show because of photos and videos showing unmasked patrons crowding near the stage. A Tampa Bay Times report cites photos showing “huge crowds packed in the outdoor area, with fans standing shoulder-to-shoulder.” The same report said the venue was “packed.”


Manteiga told CL that he thought it was inappropriate for a reporter who wasn’t at the event to use phrases like “packed” and “huge crowds” to describe the event.

He also told CL that attendance represented just 25% of the patio’s normal capacity.

Manteiga went on to blame a zoom lens for photos that showed what looked like a packed patio, but the photographer, Tampa Bay Times nightlife photography vet Luis Santana, posted wide shots in response. Some of those photos do show unmasked concert goers standing close together, but Williams notes that many of the clusters of people are standing near the aforementioned socially-distanced couches.

“Those people arrived together, so we asked them to stay together,” Williams said. Both Manteiga and Williams concede that rain made it hard to enforce the concert’s mask rules; Williams added that he ordered 1,000 masks and that there were none left by the time they’d handed them out to patrons whose masks were ruined by intermittent showers.

The Cuban Club also sent CL its own folder of photos showing the event before the rain arrived.

Plus, according to Manteiga, the City of Tampa was well aware of what was happening. “The city knew what we were doing,” said Manteiga. He also had conversations with city officials, including the Fire Marshall who saw a map of the concert layout. “Nobody said we couldn’t do it.”

Tom DeGeorge, who runs the 14-year-old, 400-capacity Crowbar live music venue just a few blocks away, told CL that he’d spent the four days leading up to the concert bugging city officials, code enforcement, at-large City Councilman Joe Citro and others to say that the concert was a bad idea with the potential to be a COVID-19 super-spreader event.


In a statement issued after the concert, Tampa Mayor Jane Castor called the concert “irresponsible,” and added that the city would’ve discouraged the event had the promoters “reached out earlier.” Castor’s statement also pointed out that a permit wasn’t required since the concert was on private property, outside and without alcohol sales. Essentially, the city’s hands are tied.

DeGeorge told CL that if the city really wanted to do something about the Cuban Club concert, it could’ve.

“What Cuban Club did was legal, I felt the city should have gone above and beyond to figure out how to shut it down and used their moral compass, based on the damage that has been done to our small businesses in this community,” DeGeorge said. “But at the end of the day, this was just the latest example of a letdown on how our city is handling this situation and not looking out for small stages in the community—anybody who says anything other than that is being dishonest with themselves.”

In a phone call with CL, City of Tampa spokesperson Ashley Bauman said, “The city is encouraging everyone to be as safe as possible. We are not through this, and it is imperative—to ensure the safety of not just of yourself but the people you come home to—that you do anything you can do to protect yourself, and that includes not crowding around each other at a concert be it inside or outside.”

Bauman added that promoters for the concert started selling tickets to the concert before ever reaching out to the city, which had to reach out to organizers after catching wind of the event.

Manteiga told CL that other event organizers have already reached out to the Cuban Club—which took a rental fee for Saturday’s concert—about hosting events. His venue has been bleeding money since March. It didn’t qualify for PPP and only has one paid employee—a maintenance man.

Bauman could not speak on the record about what action the city will take with any future events at the venue, but DeGeorge feels like city leadership—which seems to have bent over backward to let restaurants find creative ways to create more revenuen—has failed small performing arts venues like his.

“We have said, as a city, is that our small businesses, doing what's right, and the health of our public is taking a backseat to an executive order that our own city did not believe was very well written,” DeGeorge added.

Music venues and bars were the first to close down in March, and while bars were allowed to open for on-site, limited-capacity consumption from June 5-26, venues have remained shuttered. In the absence of an actual plan to mitigate the effects of coronavirus—or even effectively contact trace the virus—Halsey Breshears, Florida’s Secretary of the Department of Business and Professional Regulation, has said that there’s no timeline for reopening the state’s bars.

In response to an email to a small Cape Coral venue owner,  Breshears wrote, “Do not expect to open up until January 1, 2021. I feel comfortable telling you that. This way when we open bars before that, you can say I did not lead you on that it would be an earlier date. So manage your finances like you won’t open till next year.”

So in lieu of a plan, Breshears’ office offered bars—including music venues—a loophole: Get a 509 food license and become a restaurant.

But even at 50% capacity—should he apply and be approved for the 509 food license, which is costly in itself—DeGeorge’s bar, Crowbar, will be stuck losing money like so many other restaurants trying to make it as the state fumbles through the coronavirus.

On the same day CL spoke with DeGeorge, the Hillsborough County Board of Commissioners voted to approve a multimillion-dollar relief package for eight non-profit cultural centers—David A. Straz Jr. Center for the Performing Arts, Tampa Theatre, ZooTampa, Florida Aquarium, Tampa Bay History Center, Tampa Museum of Art, Glazer Children’s Museum and the Museum of Science and Industry (MOSI)—which are all eligible for up to $500,000 reimbursement for coronavirus-related supplies, equipment, and facility improvements to protect employees and guests.

The board also OK'd a total of $4.1 million for safety improvements at the Amalie Arena and George Steinbrenner Field (which the county owns).

The night before, many venues in Tampa Bay were lit up red to bring attention to the “Restart Act” in Congress, which could give relief to live event industries. The National Independent Venues Association—NIVA, of which DeGeorge is the Florida captain—represents 2,000 U.S. independent venues, promoters and festivals in every state and Washington, D.C. NIVA sees “Restart” as its last chance to keep the nation's venues alive amidst a pandemic shutdown with no end in sight, but small music venues weren’t mentioned in the HillsCo BOCC agenda (CL reached out to the county to see if small venues might soon find relief in the form of cash assistance; we’ll update this post with any response).

DeGeorge told CL that some months ago he was approved for $20,000 from the county to help mitigate costs associated with holding on to his business as it remained shut down. The money just hit his account and will cover just over one month's expenses. Audibly frustrated and in tears, DeGeorge said he didn’t know what to do anymore.

“I’m ashamed of my city. I don’t wanna be here anymore,” he cried into the phone. “We are being abandoned. I’m exhausted. You don’t give a fuck if I live or die. Why am I fighting to stay here in the neighborhood that I love? I’ve been fighting 24 hours a day for six months straight.”

UPDATED: 09/03/20 11:31 a.m. Updated to remove a quote from Williams which was meant to be off the record and to include additional comment from a city spokesperson.