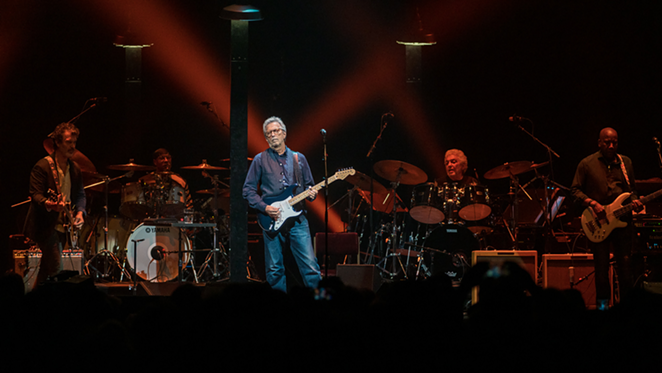 They say “Clapton is god” for a reason, you know.

The guy’s a Yardbird, a third of Cream, and the only person inducted into the Rock and Roll Hall of Fame three times. He also helped pioneer the Hard Rock Cafe chain by donating the company’s first ever piece of memorabilia to the location in London—a Lead II Fender. Not to mention playing that epic solo on The Beatles’ “While My Guitar Gently Weeps,” which helped lead to a lifelong friendship with George Harrison.

Saturday night at Amalie Arena, the 76-year old guitar icon, and his 8-piece backing band, played its penultimate show in the United States for the year—before one last date over in Hollywood, Florida. With maybe a few hundred masks in sight—likely much to Slowhand’s pleasure, this was the first major, Tampa-proper show from a rock and roll household name since Billy Joel played a semi-annual gig here in February 2020. Sure enough, the sold-out gig turned out to be nearly three hours of guitar exemplariness, unmistakable blues songs that spanned multiple generations, and a hopeful sign of live music being on its way back to being safe. (Well, to an extent.)

It had been, um, carry the one…13 years since Clapton last rolled into town—with Robert Randolph & The Family Band opening. This time around, the brother of a guitarist who has the same level of influence as the headliner opened.

At 8 p.m. on the dot, Jimmie Vaughan, older brother of the late, great Stevie Ray, came sauntering out, all dressed in black. “Howdy, folks!” he greeted. His last gig in Florida was opening for Lynyrd Skynyrd’s so-called “farewell tour,” which gave him a much smaller setlist to work with. In a little over 30 minutes, Vaughan effortlessly flew through a 9-song setlist, and threw in tidbits that only a Vaughan could pull off so flawlessly. Playing all his licks on one white Fender Strat, he expressed eternal love and sentiment for Texas during Double Trouble favorite “Texas Flood,” and literally made his guitar cluck like a chicken on “Baby, Scratch My Back,” which gave him precious memories of his days with The Fabulous Thunderbirds. 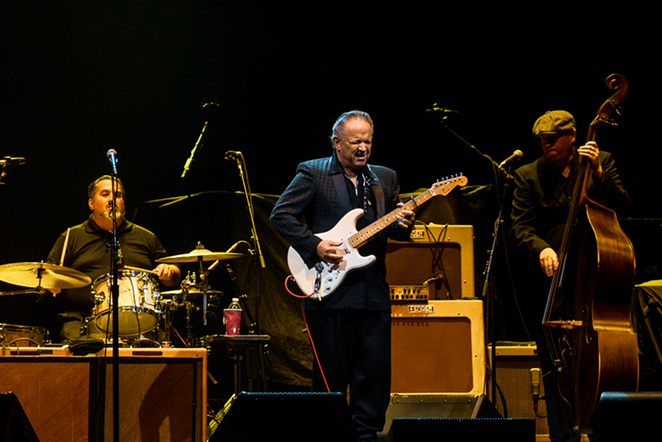 There’s no denying that Jimmie’s undeniable skill is a bit overlooked. Although, I have to admit that I felt a little bad that during “Boom-Bapa-Boom,” Jimmie fell flat in an attempt to get the crowd to sing the chorus near the end. He did play part of his last solo behind his head, though.

At 9 p.m.—also on the dot, out stepped Clapton from stage-left—dressed in his regular navy-blue button-down, vest, and jeans. Kicking off the set was “Pretending,” originally off of the Journeyman album. Once every lyric had been sung, guitarist Doyle Bramhall II—who has played with Roger Waters and the Tedeschi Trucks Band, got his first of many opportunities to wail out a solo that would be succeeded by Clapton himself taking the solo wheel.

While Cream and the Yardbirds went completely unacknowledged on Saturday, another group that the guitar hero served in was certainly saluted. “Key To The Highway,” a jam popularized by Derek and the Dominos—the supergroup that Clapton and Duane Allman played in, gave the crowd an idea of how band member solos were going to go for the rest of the show. First, pianist Chris Stainton would pound out a few bars, followed by organ player (and Mike + The Mechanics alum) Paul Carrack, then more work from Bramhall, and finally, Clapton coming in at the end. Sometimes, they’d circle back around, usually in that order.

There came a point where Slowhand took a seat in a chair, and swapped out his iconic black Strat for an acoustic. Everyone not seated already took one—including backup singers Sharon White and Katie Kissoon, and the only electric instrument in use was Bramhall’s Heritage H-53—which was used while slightly tucked away into his armpit. A slightly sped up “Tears In Heaven,” and “Layla” were both thrown into the acoustic set. While the original, electric recording of the latter by Derek and the Dominos is unarguably one of rock’s most potent anthems, Clapton’s Unplugged won Album of the Year at the 1993 Grammy Awards, and is viewed as a cornerstone of the guitar god’s career, so saluting its existence is fully necessary, and frankly, mandatory.

Also in the acoustic portion of the guitarist showcase was a lovely tribute to Fleetwood Mac co-founder and psychedelic-era frontman Peter Green, who passed away last summer. “Man Of The World” was Slowhand’s pick to salute his replacement in John Mayall’s Bluesbreakers. “This is dedicated to Peter Green,” he uttered. Other than that, not much commentary came out during his set, other than “good evening” as he hit the stage, and the regular “thank you very much” after each song.

Not to worry: Clapton played some of his other hits in a non-acoustic fashion. “I Shot The Sheriff” came four songs into his set. “Wonderful Tonight” was mainly performed the way it was recorded. And “Cocaine” opened with a bass solo from Nathan East—a member of jazz quartet Fourplay once upon a time.

Only one song made up Clapton’s encore. With a little help from Vaughan, he ripped out Joe Cocker’s “High Time We Went,” with Paul Carrack on lead vocals. All three guitarists on stage were given a chance to show off their playing style for Tampa one last time, and with Carrack finally singing something, you couldn’t help but wonder what a Mike + The Mechanics rendition would sound like.

Here’s the thing: In recent months, Clapton has been a poster boy for vaccine skepticism and anti-lockdown ideologies, having even released new protest music with Van Morrison. And per his request, Saturday night’s show specifically did not require COVID-19 vaccine cards or proof of a negative test for entry—probably a last for Amalie Arena. But hey—the guy’s still got the talent to back up almost any remark he makes—even with a somewhat recent diagnosis of peripheral neuropathy.

So yes, Eric. You were wonderful Saturday night.

Josh Bradley is Creative Loafing Tampa's resident live music freak. He started freelancing with the paper in 2020 at the age of 18, and has since covered, announced, and previewed numerous live shows in Tampa Bay. Check the music section in print and online every week for the latest in local live music.
Read More about Josh Bradley
Scroll to read more Music News articles