Hey soul sister, Train is coming to Tampa with Jewel and Blues Traveler this summer

The tour finds Train touring behind its 11th studio LP, AM Gold, due on May 20. 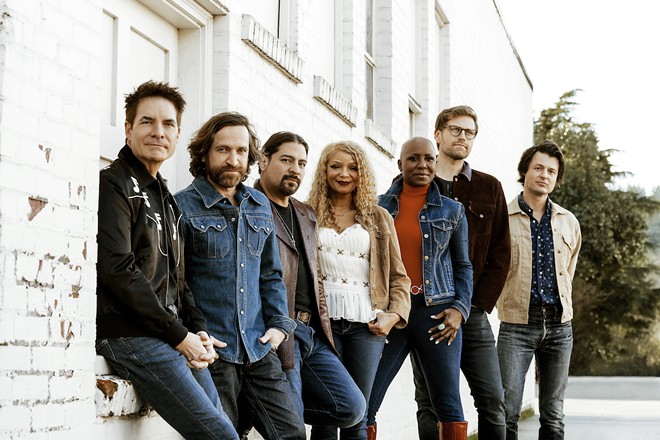 Photo by Brooke Clark
Pat Monahan (L) with band Train.
Cancel that Goop order, because the Train is coming to Tampa this summer with Jewel and Blues Traveler in tow.

Tickets to see Train, Jewel and Blues Traveler play MidFlorida Credit Union Amphitheatre in Tampa on Saturday, June 25 go on sale next Friday, Feb. 25 at 10 a.m. EDT.  Ticket prices have yet to be announced. The other Florida shows on the tour are in West Palm Beach (June 24, iThink Financial Amphitheatre) and Jacksonville (June 26, Daily's Place).

The tour finds Train touring behind its 11th studio LP, AM Gold, due on May 20; the album is the pop group's first album of all-new original music in five years.
Jewel has been in the headlines lately not just for being in "The Masked Singer" but also for her comment to Joe Rogan telling the controversial podcaster "You're doing a great job. Keep it up" and a subsequent post supporting her fellow Canadian Neil Young who pulled his music from Spotify in protest of COVID-19 disinformation from Rogan.

“I’m so proud to know people of such conviction," Jewel wrote. "I hope we can embrace and encourage discourse between different viewpoints and use our right to protest for the things we believe… it’s what makes us great …”

Blues Traveler's John Popper, for his part, has moved on from a 2007 weapons arrest and was fortunate to escape relatively unharmed after his bus crashed in August 2021.