Interview: Dropkick Murphys’ Ken Casey doesn’t want to be a man on a soapbox

The Celtic punk musician is more storyteller than politician. The band's show at Jannus Live is sold out. 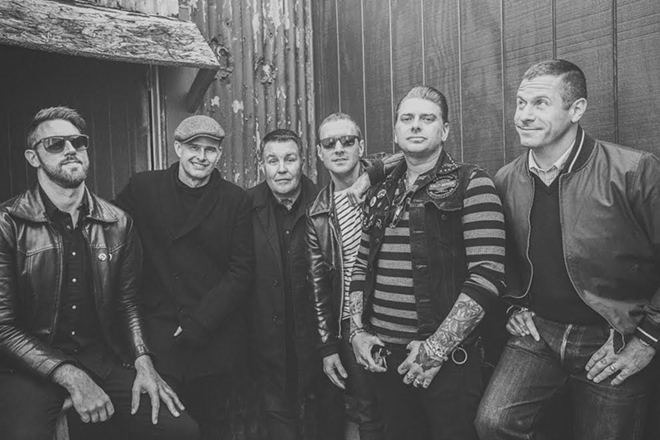 Ken Casey had never been outside the Boston area before he co-created the Dropkick Murphys in 1996. Now, he and the other members are travelling the world to promote the band’s ninth album, 11 Short Stories of Pain and Glory, released in January. It’s a fitting name since the album resembles a series of strung-together oral narratives, forged with elements of Irish folk and reflective of the band’s recent “triumphs and tragedies.”

“All of our records are like a documentation of our lives,” Casey told CL.

And life can be painful sometimes. The Celtic punk band’s vocalist/bassist/only remaining founding member estimated in January that he’s attended about 50 wakes over the past three years. Many of these deaths were overdoses, victims of opiate addiction. Among those lost were close friends and family of the band, including his cousin and vocalist Al Barr’s brother-in-law.

For Casey, 11 Short Stories “has a lot to do with our processing” of “the sad, horrific truth” of the nationwide opiate epidemic, an issue he considers widely underreported by the media. On the album, “You’ll Never Walk Alone,” a Rodgers & Hammerstein show tune, is repurposed as a compassionate rallying cry for recovering addicts, an audience the band has been supporting through its charity The Claddagh Fund.

The album also includes “4-15-13,” a track commemorating the victims of the 2013 Boston Marathon bombings. Last night, the band performed it live for the first time in Columbus, OH, which ended with the crowd in “almost like an empathetic chant.”

“I didn’t want it to be politics,” Casey says of his approach to the song. His emotional response stems from a more personal level. He met almost every bombing victim in person. He and the other members have raised $400,000 for the victims through merchandise sales, giving back to the community that raised them. Dropkick politics are clear: the band is pro-labor, pro-equality and an advocate for working-class rights. Still, Casey doesn’t use the stage to preach.

“A lot of times we leave it to the lyrics,” he says. “We understand that people pay their hard-earned money and we don’t want them to see someone on a soapbox.”

Instead, shows involve some of the most raucous and punk-rock concert misbehavior. The European crowds can get boisterous with fans from Greece lighting fires with road flares inside the bar. At the end of each show, the band lets fans come onstage. But in New York a few years ago, Casey himself attacked a skinhead who used the invitation as a platform to extend the Nazi salute.

“When we invite someone onto our stage, it’s like inviting them into our home,” he says. Those who disrespect it deserve a beating.

As for the band’s March 6 show at Jannus Live, Casey claims fans can expect “a little bit of everything.”

“You get it all — there’s an intensity to it, a sense of community, a lot of laughs,” he says. “A lot of people have seen us live. That’s how we hook them.”