He plays Fubar in St. Petersburg on December 10. 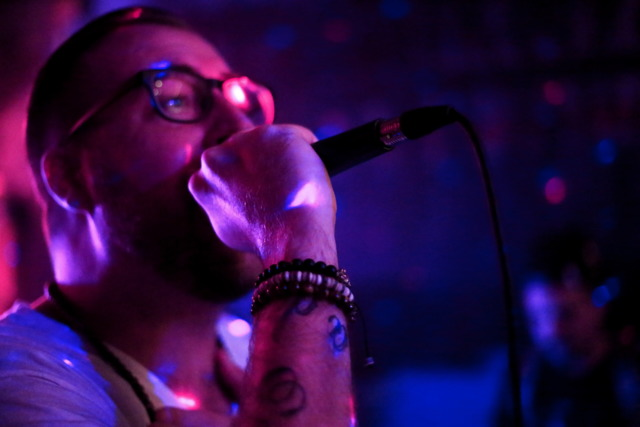 To Hagan Lee, words are weapons, and the 33-year-old Clearwater emcee stopped to chat with CL as he prepares for the physical release of his new album Bars & AKAs. We talked about why we had to wait three years for a solo debut, his dad and the legitimacy of the Bay area rap scene. You may have read an abridged Q&A in our print edition, but the full interview is available below. Get more information about the free LP release show via local.cltampa.com.

Can you talk about your growing up and how it shaped your decision to be an emcee? Your dad plays a lot of guitar, right?

He does, he's a very good acoustic player. Music was always being played in my home so I was always drawn to it. I fell in love with Hip-Hop around 11 years old and recognized early the way rappers could paint pictures with their words. Snoop took you to Long Beach, Nas brought you to Queensbridge, and all the while I'm in Largo chillin'. What really stands out is CL Smooth's line on "T.R.O.Y." where he says, "I always had a father, even when my biological didn't bother." My dad was there my whole life, but I empathized with him in a way I can recall vividly to this day.

Where does the love of words come from? When do you recognize your appreciation for lyrics, and how to do you work on that as you grow up?

Words are weapons, they can shape the shape the world. I've always loved writing, so writing songs came naturally to me. When I was learning how to properly craft songs, which never actually stops, I studied what made the greats special. What did they do that made them stand out? Once I was able to understand timing, cadence, inflection, and schemes I was able to build off of that and create my own.

You put the album out digitally on August 26. What’s the significance of a physical release? Just CDs, right? If so, how many?

I want to get the project in more hands. I'm pressing up 200 for December 10, and will press more once those get low. I wanted to attempt a straight digital release and see how it would do. I saw some early success, but it dwindles online if you don't continue to promote, especially monetarily. Facebook only lets so many people see your posts unless you pay them. I'd rather put that money into physical copies and hit the streets with them.

The secondary titles to the songs on Bars are your way of tying them all together. What’s the significance of “bars" — also will you talk about the Bartender Music Group?

BARS! It's a rapper thing, man. Every rapper that thinks they can rap says they have bars. For those not in the loop, a bar is just a line in the song and a measurement. When you say "I got bars," you're saying you're dope! I wanted to tie the album together, and thought it would be clever to use the names. All I'll say about BMG right now is... The BARtenders are back! Shout out to Ron St PetersBurgundy, Mojito, and Julio. I'm so happy they're working together again.

A lot can happen in the span of three years, and a lot of artists tend to feel disconnected with material as it ages. Talk about which songs on the album are the oldest and what it took for them to mean enough to make the album.

You aren't kidding, three years is an eternity. "Cover It Up" is the oldest recorded piece at about three years, but the verse on "Let The Story Begin" is probably six years old. It's one of my favorite things I've ever penned. I wrote that for my late friend Danny Geldbach. He was one of my biggest supporters as a young man, and was taken from us entirely too early after a motorcycle accident.

We're out here living life. FoulMowf is doing his thing. He's raising his family, working, and writing. I'm working. We'll come back together and follow up From Here To Hear when the time is right. That'll always be my brother though, regardless of music

You write for a living in the daytime. Does that desk job make you better at what you do on stage and in the studio?

Yes and no. Yes for the fact that it keeps me in tune with what's going on in the outside world on the daily. No in the sense that I'm using my creativity all day as a writer so I don't write as much music after I shut off the laptop, but all it takes is the right environment and I'm right back to music.

What other Bay area artists, across all genres and mediums, are you a fan of?

I could name hip-hop artists for days, so I'll go outside our genre. I'm a big fan of Geri-X. Mountain Holler, Red Feather, Set and Setting and whatever else Mark [Etherington] is a part of. He's a beast. Justino and The Difference is really dope. Justin might be the best guitar player I've ever had the pleasure of knowing. Big fan of Bangarang, and I'd be remiss if I didn't pay respect to the homies in Samurai Shotgun for taking this Bay thing to the next level. Can't leave out Saint and DEA, that's family! I think the music culture in this area is so underappreciated. You can find great music in St. Pete/Tampa every night of the week.

When I look at the hip hop community, I see a lot of unity and collaboration (especially your 2nd Saturday stuff at Fubar). What kind of new things or movements would you like to see from the community in 2017?

Second Saturday is our staple for the scene. We're almost at three years, and the support to keep it going is incredibly humbling. I've been on a mission to see St. Pete come together with Tampa bridge the bay. It's happening, it's growing, and there's real effort from a lot of people. It's a beautiful thing.

Are we going to have to wait for another three years for an LP?

Not at all. I'm currently working on an EP with Mike Mass. His production, my vocals, all for the Bay area. After that, I'll be locking in with The BARtenders to finally bring "Working Class Hero" to the world.

"Cover It Up” talks about struggle and the misconfiguration of the truth. Do artists, particularly the ones who write lyrics and deliver them over music have an increased role in keeping their audiences conscious of the world at large?

I do, but it's bigger than that. Anyone that has a platform has a duty to speak their truth. As an emcee, it's all about my words, and I can't ignore the things around me. Everything goes into the music. Sometimes it's love, sometimes it's struggle, sometimes it's politics, but it's always me... even the ridiculous sh*t.

Good. I'm a FFB junkie. I'm in four money leagues, and have a real shot at winning two. It's all about that profit! Fantasy JoneZ!!! Add in the daily leagues on Fanduel and DraftKings, and it's a constant struggle. My girlfriend Alison thinks I have a problem.

What’s it mean to know that mainstream radio is interested in local music, specifically guys like Busta and DJ Sandman?

It's huge, and what Sandman does for our scene shouldn't ever be understated. He's the Godfather! Busta getting me on [mainstream radio station] WiLD [94.1] was insane, I can't thank him enough for that. With that being said, we need more of the gatekeepers to let us in. They add legitimacy to what we do. Not that we aren't legit, but the major radio co-sign opens our brands up to the casual fan. I understand corporate radio is all about advertising dollars, so they're going to play what they believe maximizes their profit margin, but local music isn't given a legitimate chance to prove it's worth. It doesn't even have to be me. Play more Jack Fletcher, Play some Mighty Jai, let us live!

Listen to Hagan Lee's new LP below. Join him at Fubar on The 600 Block of downtown St. Petersburg for an album release show on December 10. More info is available at local.cltampa.com.