And Iron Maiden will be back in town just before Halloween 2022. 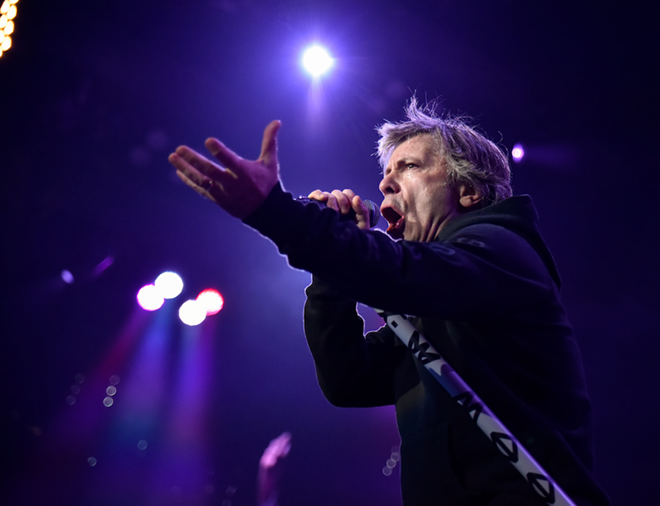 Chris Rodriguez
Iron Maiden's Bruce Dickinson with the band at Amalie Arena on June 11, 2017.
Iron Maiden frontman Bruce Dickinson is hitting the road in North America early next year—but not as the frontman of his iconic British heavy metal group, but instead for a round of spoken-word dates.

A press release says the "Evening With Bruce Dickinson" tour will see the iron-lunged belter trading in the guitar pyrotechnics and grotesque Eddie banners of Maiden for a night of solo "storytelling, a-capella singing and audience Q&A. The shows kick off in Fort Lauderdale and both Tampa and Orlando are included in the itinerary.

Tickets to see Iron Maiden's Bruce Dickinson do spoken word at Tampa Theatre on Thursday, Jan. 20 are on sale now and start at $34.50.
Dickinson—who's bringing Maiden to Amalie Arena in October 2022—also a pilot and beer brewer, has done this style of show in Europe to a positive response. He's got no shortage of stories to tell.

This post originally appeared at our sibling publication Orlando Weekly.

Support local journalism and a small but mighty team works tirelessly to share music news, events and concert announcements as the Tampa Bay music scene recovers from coronavirus shutdowns. A one time or monthly donation supports our staff, and every little bit helps. Subscribe to our newsletter and follow @cl_tampabay on Twitter.