Jacksonville's Sunbears! make music that lives up to their name 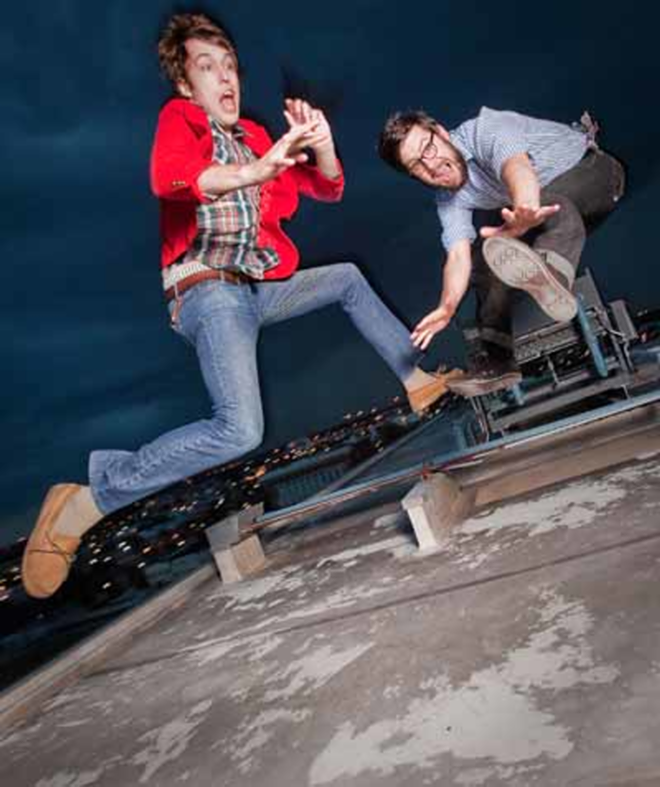 Two years ago, Jonathan Berlin was in a bad place. He was the lead singer and songwriter for a band called Bernard that had a distribution deal through East/West, a division of Warner Bros. The trio, whose drummer was his longtime collaborator and best friend Jared Bowser, had played 300 shows on tour.

So what exactly was the problem, you might wonder?

"With Bernard, we worked our asses off to make it happen," Berlin, 25, says in a phone interview. "As it turned out, it just wasn't fun. I always loved writing songs, but after we got hooked up with Warner Bros, I started writing and I couldn't do it. It was like, 'I'm writing a record for Warner Bros. This has to be good.' The whole thing wasn't really awesome."

Given those circumstances, a lot of artists would've continued to flog it, but Berlin decided to walk away. The Bernard split led in part to a four-month rift between him and Bowser, 23.

Berlin decided to rethink this whole music career thing. And he came up with something of a novel solution: He had to basically stop trying. So Berlin retreated to his loft in downtown Jacksonville and started making music for himself.

"I started writing, but had no particular ambition," he says. "I was in a place where I wanted to write something that made me feel good, something that I might listen to."

Next thing he knew he had six songs and decided to record an EP under the name Sunbears! During a Bernard tour, Berlin and Bowser had visited the Smithsonian in D.C. "There was this little replica sunbear standing upright," he recalls fondly. "It was like, 'Look at this little guy. It's a sunbear.' I think they're indigenous to Malaysia. They might be endangered. The name just stuck in my head."

Berlin released the first Sunbears! EP, For Everyone — which he recorded entirely on his own — independently in a download-only format. He layered gauzy, slow-moving keyboards into a lush backdrop for melancholy hooks sung in his fervent, at times pleading, tenor. All told, not bad, but the new stuff retained vestiges of Bernard's Radiohead fetish.

Then Berlin and Bowser patched things up. He hesitated to ask the drummer to work with him again, but finally summoned the resolve and Bowser readily accepted. They jumped right into recording a new EP, and the collaborative environment — "to have Jared be there with me and excited, it was such a fun thing" — had a profound impact on Berlin. It was if he'd taken his music and shaken out all the mope. The second EP, Dream Happy Dreams, opens with a burping synth-drum beat and the sound of little children laughing. The song, "A Lovely Tuesday Afternoon," then launches into an uptempo rock groove, tinkling pianos and the kind of soaring synth line that would be right at home on a Flaming Lips record. The melody soars even higher when Berlin sings, "We'll make it/ We're tired but we still have faith/ We'll make it."

Dream Happy Dreams continues in this uplifting vein, adding influences from Berlin's youth like the Beatles and Beach Boys. Berlin, who lived in small-town Texas before moving to Jacksonville at 16, was reared on '60s music. His father was a DJ at an oldies station. "I'd go with him to the station, get a Mountain Dew and a bag of Skittles and we'd play this game: who can name the song the fastest?" he remembers. "My dad was a Beatles head. I got all of that '60s stuff in volumes, and didn't give any resistance."

Because he was home-schooled, Berlin didn't have a big peer group to hip him to the latest new sounds. It wasn't until his mid-teens that he developed his own, more modern, tastes. "It was never about the need to check out the latest Bush record," he says. "In the '90s, I started getting into the Flaming Lips, Ben Folds, quirky, nerdier stuff. Weezer, I loved Weezer. Still do."

That sense of whimsy finally found its way into Berlin's music with Dream Happy Dreams. "As we were working on it, Jared and I looked at each other and said, 'I think this is good. This feels like our own sound,'" he says.

Despite the artistic success of the music, Sunbears! were determined not to jump back into the music-biz rat race. They didn't shop the EPs to labels, didn't rustle up a booking agent, didn't even press CDs.

But a funny thing happened. Sunbears! started to take off anyway. One of their favorite bands, Dredg out of San Francisco, played Jacksonville on a Halloween, and Sunbears! wrangled an opening slot — strictly for the fun of it. The duo performed a loopy set dressed as zombies.

"Dredg was more serious, darker, but they came up to us afterward and said, 'We have 20 dates all through the Midwest. If you guys wanna play, it starts next week. We can toss you 150 a night,'" Berlin recounts. "We thought, 'Yeah, we can jump in a car and drive across the country for a couple weeks. It was amazing. We played for like 1,200 people a night. And it was weird, because the whole time it was happening, we never had any intention of making anything happen. We played 300 shows with Bernard and never came close to what Sunbears! has done, and Sunbears! is on its 48th show."

They include a month-long tour with Black Kids and Mates of State.

How long will this serendipitous tour arc last for Sunbears!? Will they have to, at some point, knuckle down and try?

"I guess it's something we'll have to deal with soon," Berlin says with a chuckle. "I really don't want to start looking at things like, 'What can we do to push this thing forward?' I've been through that a couple times before. I'd rather it grow organically.

"And I'm weird about promoting myself. I feel like a tool saying, 'Check out my record.' I think the music's been getting better and better and I'm happy with it. We're not trying to impress anyone."